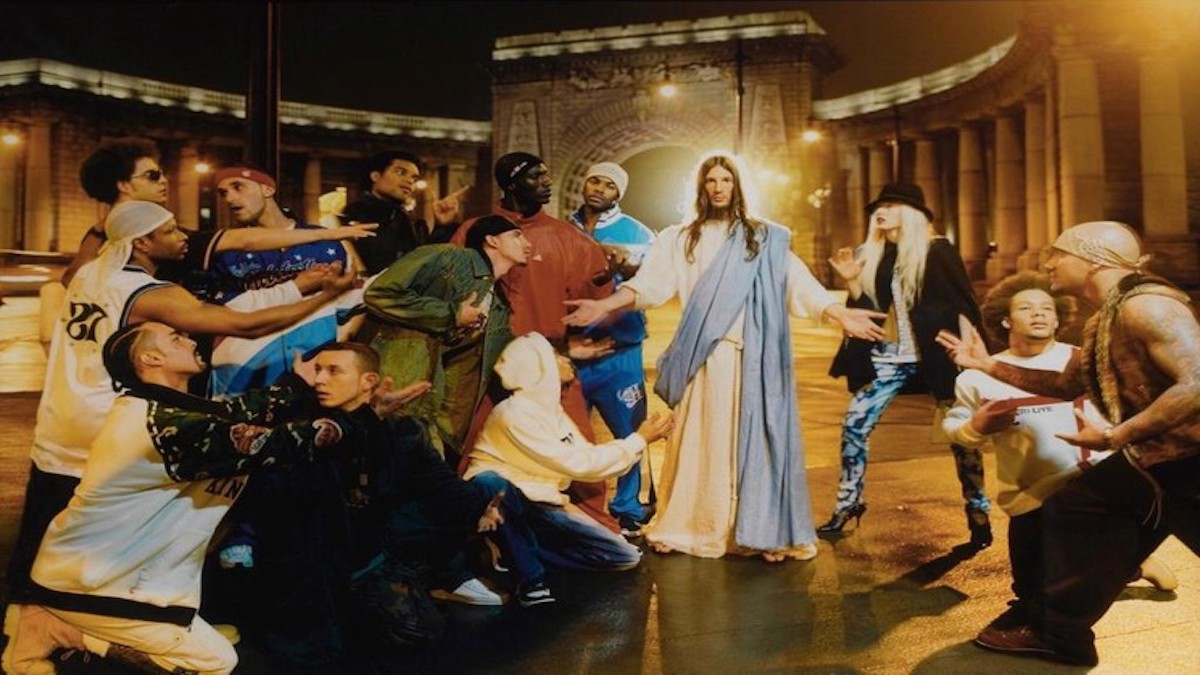 Does art have a supreme mission? A duty to its public? A guiding principle? This question, which has long obsessed great masters, philosophers and intellectuals from all walks of life, has, alas, no answer. The emergence of abstract and conceptual art has considerably blurred the lines. More so than ever before, art is without limit, without definition, without rules. However, it is possible to find similarities across all forms of art… Artists often share the usage of a certain technique alongside the search for originality. Even so, this long-sought-after originality is a strange concept. Nothing is ever completely original, everything is inspired by something. Many artists today are conscious of this and deliberately draw attention to their sources of inspiration, integrating the past and the present.

Join Artsper to find out how contemporary artists today are taking inspiration from the great masters to reinterpret their classic paintings.

This artwork by Leonardo da Vinci, one of the great masters of art history, is one of the most famous works ever painted. Admired by all, and copied the world over by artists and businesses since it was painted in the Renaissance, it’s no surprise that this work continues to inspire contemporary artists today. Despite depicting the epitome of biblical scenes, the Last Supper, artists today are putting their own contemporary twist on this work, in often unexpected ways.

One of these artists is none other than David Lachapelle. His rendering of The Last Supper depicts Jesus perfectly in line with Christian iconography, his apostles have changed slightly though… Other than the tattoos and baseball caps, they are undoubtedly a more accurate representation of the real apostles (Jews from Israel descended from the Egyptians).

Artist Anne-Catherine Becker-Echivard creates a similarly striking rendering of this classic piece. As a general rule, Becker-Echivard rejects the dehumanization of work and often ridicules the sacrosanct aspect of corporatism. In her view, nothing gets this message across quite as well as globally powerful iconography. But, would Jesus and his apostles liked to have posed as goldfish?.. “Father, forgive them for they know not what they are doing”. (Luke, 23:24).

Painted in 1650, Innocent X by Diego Velazquez is an emblematic painting. Sponsored by Pope Innocent X, it sparked major controversy in the episcopal palace. While the Pope wanted a portrait of wisdom and divine enlightenment, Velazquez painted him as he was: authoritarian and reddened by his frequent tantrums. ‘Troppo vero!’ (too realistic!) the Pope would say to him before demanding him to start again. Velazquez, with the strength of the Spanish character, refused categorically, however, and the Pope ended up accepting the painting.

Francis Bacon is a painter whose work is the footprint of great tradition within painting, as we recall in the exhibition Francis Bacon and the Art Tradition. This reworking of Innocent X in 1952 reminds us of the violence and force which are so characteristic of his work. The aftermath of the atrocities of the Second World War, the tortured image he gave of the past, shocked and disturbed spectators. While Pius XII was still the Pope in 1952, Francis Bacon’s Pope was already half dead…


The quality of Yan Pei-Ming’s work is twofold. He manages to balance a mastery of oil painting with his references to pop art by repeating strong subjects in varying shades, much like Andy Warhol.His reworking of Innocent X in 2014 demonstrates this perfectly.

The abduction of Ganymede, Unknown Artist and The Descent from the Cross, Rogier Van Der Weyden

Rogier Van der Weyden is seen as one of the leading great masters and as a key proponents of the Renaissance. His Descent from the Cross (1435) is even said to mark the beginning of the Renaissance in art. It is no surprise therefore that his works represent a highly significant turning point in the world of art. Artists today take inspiration from the virtuosity in his execution of reliefs, figurations and emotions. True to form, however, contemporary artists are taking tradition and transforming it into something innovative…

His Abduction of Ganymede is a similarly recurrent mythological theme in the European pictorial tradition. It refers to the abduction of the young Ganymede by Jupiter who metamorphosed into an eagle. It was a relatively controversial theme as it made reference to homosexuality, and even to the rape, of a young boy.

The Kid, a young French artist, found inspiration in Rogier Van der Weyden’s art and in the theme of Ganymede’s abduction. By combining Greek-Roman mythology with the Christian tradition, and by blending the image of sacrifice with that of the victim, his work Blessed is the lamb whose blood flows (2015) plunges us into deep reflection.

The theme of Saint Sebastian was widespread during the Renaissance. It allowed artists to depict passion, suffering and the naked male body. In 1615, Guido Reni produced a very sensual version full of melancholy and verging on the edge of eroticism.

It wouldn’t be possible to conclude this article without mentioning the most famous painting of all… Everyone knows the Mona Lisa. She has become a pop culture icon and is no doubt one of the most copied and revisited works in the history of art. Her mysterious gaze, smile and identity never fail to catch people’s attention. It is therefore no surprise that artists today can’t stop themselves from reappropriating Da Vinci’s genius in their works. From graphic art, to street art, the Mona Lisa is everywhere!

Remakes of the Mona Lisa are not new to the art world. Duchamp’s Dadaist remake LHOOQ in 1919 succeeded in renewing the popularity of Da Vinci’s work and inaugurated a trend of famous remakes. Household names such as Andy Warhol, Basquiat, Botero and Banksy have since put their own spin on this classic work. In doing so, they have only further contributed to the immortality of this mysterious painting.

Roy Lichtenstein’s adaptation of Da Vinci’s work is no doubt one of the most iconic of the remakes. Liechtenstein employs his classic style influenced by comic strips and advertising, using bold colors and Ben-Day dots to revitalise the original. Though his references to Mona Lisa are clear, it is also obvious that Lichtenstein, as a pop art icon, is not afraid to add his own charisma and style to this masterful work

A contemporary twist for the great masters…

Artists today are proving that contemporary art does not need to be a stand alone movement. Taking inspiration from the great masters not only offers the possibility to renew and enrich tradition, it also offers the opportunity to create a new pop culture convention. The likes of Lachapelle, Lichtenstein and Bacon have demonstrated that contemporary messages are perhaps even more striking against classically iconic backdrops.

If you’ve enjoyed finding out how classic iconography is being incorporated into the contemporary art scene, you might enjoy our collection of works inspired by the Renaissance!