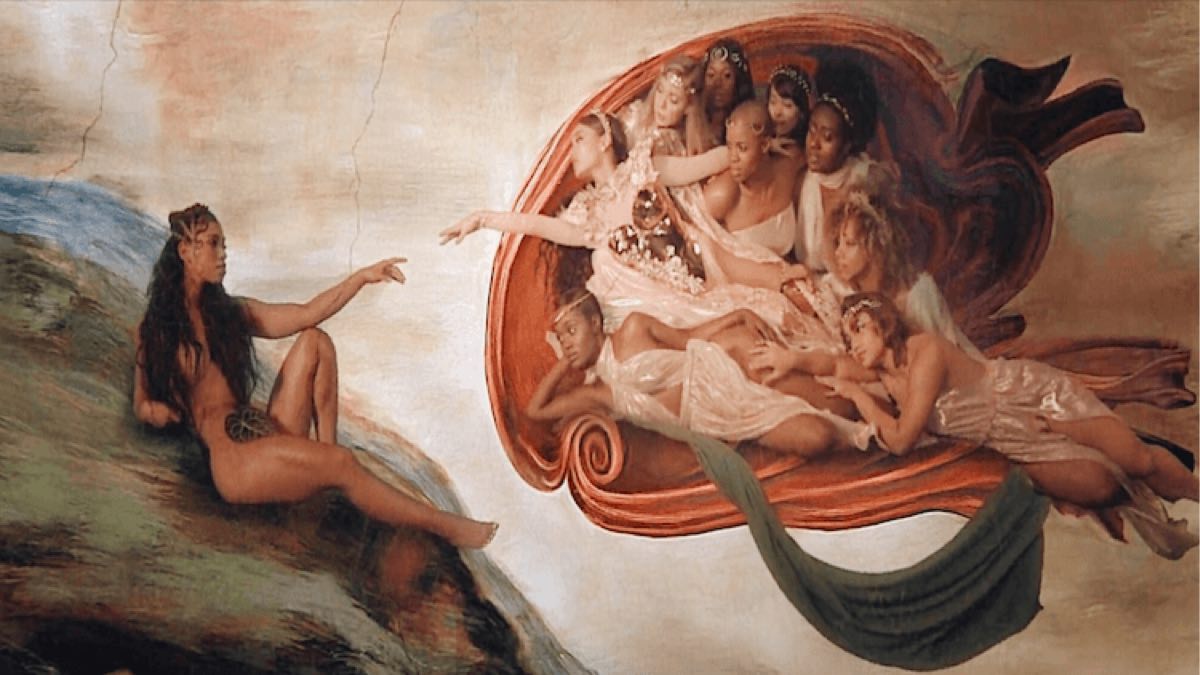 Even if you are not an expert in the history and visual culture of the Renaissance, you have undoubtedly seen elements of it reproduced in today’s pop culture. Marking the transition from the Middle Ages to modern times, and lasting around three centuries, the Renaissance was a period of great social and cultural change. Influenced by Humanism, the Renaissance affected its contemporary culture in uncountable ways, including the visual arts. Some of the most famous Renaissance art works were created by artists such as Leonardo da Vinci, Raphael and Michelangelo. Even five centuries after its end, elements of the Renaissance still bear an influence on today’s mainstream visual culture. With Artsper, discover contemporary creations inspired by this iconic period!

Album covers inspired by the Renaissance

It would be impossible to talk about the Renaissance’s influence on contemporary pop culture without mentioning Beyoncé. She has frequently used Renaissance-inspired imagery throughout her career, including in the cover of her newest album titled Renaissance. The cover features Beyoncé perched on a glimmering silver horse, looking directly out at the viewer. This image references a depiction of an Anglo-Saxon noblewoman called Lady Godiva who lived in the early 11th century.

The painting in question is a famous Renaissance art work is the earliest known of this subject, and was painted by Dutch artist Adam van Noort during the Renaissance period. Lady Godiva became an iconic historical figure because of a legend dating back to at least the 13th century. According to this legend, she rode on a horse through an English town, covered only by her hair, on the promise from her husband that in return he would cancel the high debts he had imposed on his tenants. In later versions of this legend, a man named Thomas was secretly watching Lady Godiva from his window. He lost his vision, or even his life, as a result. This is where the term “Peeping Tom” comes from. Lady Godiva was remembered for her morality and courage, and remains a symbol of feminine power even today.

Beyoncé is not the only contemporary musical artist to use Renaissance imagery in her work. Lady Gaga referenced Sandro Botticelli’s famous painting The Birth of Venus in the 2013 “Applause” music video, which featured her with long flowing locks and a bra made from two scallop shells.

Ariana Grande has also made reference to Renaissance artworks in her music career. Her music video for “God is a Woman” incorporates various elements of religious imagery, unsurprisingly, and much of this has its roots in the Renaissance period. At the end of the video, she poses in a powerful feminist recreation of Michelangelo’s early-16th century painting The Creation of Adam.

The Renaissance in the fashion world

The Renaissance is also a constant source of ideas in the fashion industry. Alexander McQueen’s 2013 Fall collection, an iconic moment in the fashion world, featured ten Renaissance-inspired looks. This show featured gowns cut with an Elizabethan silhouette, cut low over the shoulders and square across the chest. Created by Sarah Burton, this dress from the collection displays stylistic influences from Queen Elizabeth I’s fashion, as depicted in this mid-16th century portrait of her.

The visual arts in Europe were transformed completely during the Renaissance. Whereas artworks were previously used as religious objects, they began to reflect the humanist views that underpinned this period. This view is based on reason and emphasizes the shared humanity, individual potential, and agency of human beings. In art, this influenced both subject matter and the way artists approached their work. Artists began to reference classical mythology and literature, as well as Classical Greek and Roman art. Depictions of ideal beauty and proportions were increasingly present in artworks, concepts that were elevated in ancient Greece.

Images inspired by Renaissance art can be found throughout the history of art, and across other aspects of visual culture. Gian Lorenzo Bernini’s famous sculpture Apollo and Daphne has inspired many artists. It depicts the climax of the story of Apollo and Daphne from Ovid’s Metamorphoses, in which Apollo falls madly in love with Daphne who rejects him as she has sworn to remain a virgin. This myth of lust and rejection inspired Marco Araldi‘s work Apollo & Daphne, in which the artist depicts the famous statue in a composition with geometric patterns, bringing attention to the idea of ideal proportions.


The Renaissance’s influence in photography art

Paris-based photography studio Iconographia was founded by two art historians. They often explore Renaissance and other historical subject matter through the medium of photography. Their work depicting Saint Sebastian references famous Renaissance art works that treat the same subject. Saints were a popular subject matter during the Renaissance, as well as portraits of important contemporary figures. This is because they represented the beauty, agency and intelligence of man.

In their work Saint Sebastian I, Iconographia nod to this saint’s later interpretation as a symbol of homosexual desire. When talking about their artwork, the artists behind Iconographia said that depicting this saint gave them “the opportunity to work on the question of the eroticization of the male body, as well as the important queer, homosexual and homoerotic heritage of this biblical figure.” The inclusion of a Black model in this work also challenges the white and eurocentric Western beauty ideals that saturate the canon of Western art.

The Renaissance is inescapable in the world of pop culture. Its values and images still appear frequently today, whether in the music industry, the fashion industry, or the visual arts. While sometimes serving a purely aesthetic purpose, many contemporary artists and creators reference famous Renaissance art works and subjects as a tool for social or political commentary, as seen in the works of Artur M and Iconographia. Which contemporary representation of the Renaissance do you like best?