5 Michelangelo Paintings You Should Know

Genius of the High Renaissance and probably the first celebrity of art history, Michelangelo has fascinated people for centuries. The luckiest among us have even been able to admire his works adorning some of the world’s most grandiose monuments. While there are many sculptures by Michelangelo, the artist’s gargantuan oeuvre includes only a minority of paintings, mostly frescoes… However, they have naturally become part of popular culture! Today, Artsper invites you to take a closer look at 5 iconic paintings by Michelangelo.

1. The Torment of Saint Anthony

Although probably not one of his best known works, this piece entitled The Torment of Saint Anthony is crucial in the development of the great master’s career. Indeed, it is his first painting, done when he was 12 or 13 years old, circa 1487. At the time, the young Michelangelo was practicing in the studio of Domenico Ghirlandaio, a famous painter of the Florentine school. Legend has it that Michelangelo was going to observe the fish stalls in the market in order to faithfully transcribe their colored scales onto the infernal beings! The work, a reproduction of an engraving by German artist Martin Schongaueur, earned him an important reputation – it was the first to reach an American collection.

Michelangelo painted Dono Tondi (or Doni Madonna) only a few years after completing two of his most-famous works, Pietà and David. This circular painting was made using both oil and tempera, a technique that was also used by Sandro Botticelli for The Birth of Venus. Dono Tondi was commissioned by a wealthy Florentine named Agnolo Doni, who bought it on the occasion of his marriage to Maddalena, herself from a noble Tuscan family. This painting of 120 cm in diameter has striking specificities. First, its circular shape referring to the idea of perfection. Then, its iridescent colors. Finally, its pyramidal composition symbolizing the stability, the Holy Trinity. The exaggerated postures of the subjects are said to have inspired the Mannerist style, which emerged in Italy in the 1520s. The painting has been in the Uffizi Gallery since 1635, and is the only work by the master on display in Florence.

3. The Creation of Adam

How can you list Michelangelo’s most famous paintings without mentioning The Creation of Adam? The work, commissioned by Pope Julius II, is part of a monumental fresco divided into 9 distinct panels, and covering the entire ceiling of the Sistine Chapel in the Vatican. Inspired by biblical scenes taken from the book of Genesis, the episode represented is undoubtedly the most significant of the series, as evidenced by the many tributes and reproductions of which it is the subject. God gives life to the first man by almost touching Adam’s index finger. This image, certainly the most sacred in the history of Western art, symbolizes humanity. And while Michelangelo, the sculptor of all sculptors, hesitated for a long time before taking on the project. Pretty funny knowing that The Creation of Adam is nowadays admired by about five million people every year in the Sistine Chapel!

This mural is one of the greatest masterpieces of Western art. Commissioned by Pope Clement VII, the immense fresco stands above the altar of the Sistine Chapel. It was 25 years after completing its ceiling that Michelangelo embarked on the realization of the fresco. He finished it at the age of 67. The work, although exceptional, divides. It is criticized for its general composition, but also for its characters with overly muscular and naked bodies. The genitals represented were covered with draperies by the Mannerist Daniele da Volterra after the death of Michelangelo. Struck by censorship, this one-of-a-kind painting depicting a dramatically intense scene constitutes a turning point in the history of art. Indeed, it marks the passage from Humanism to the new era.

5. The Crucifixion of St. Peter

Michelangelo’s last fresco painted during his lifetime, The Crucifixion of St. Peter was commissioned by Pope Paul III in 1541. Located in the Pauline Chapel of the Vatican Palace, it depicts a tragic scene, namely the crucifixion of the saint by soldiers of the Roman Empire. At the time, the exaggerated dimensions of this painting created a scandal. However, these unusual proportions were deliberate, so that when the observer on the ground looked up, they saw the images in the correct dimensions. Michelangelo was known for his ego. He has supposedly represented himself wearing a blue turban in the upper left corner of the painting!

In conclusion, the multidisciplinary artist is a legend of art history. Each of his works transcribes his desire to reject tradition. In his frescoes, so precise that they look like sculptures, the characters embody power and elegance. The influence of the Florentine genius is simply inestimable, as his work is so colossal. During his lifetime, the artist also engaged in architecture, urbanism and poetry. He surrounded himself with the most illustrious patrons in order to create pieces that are still revered today! 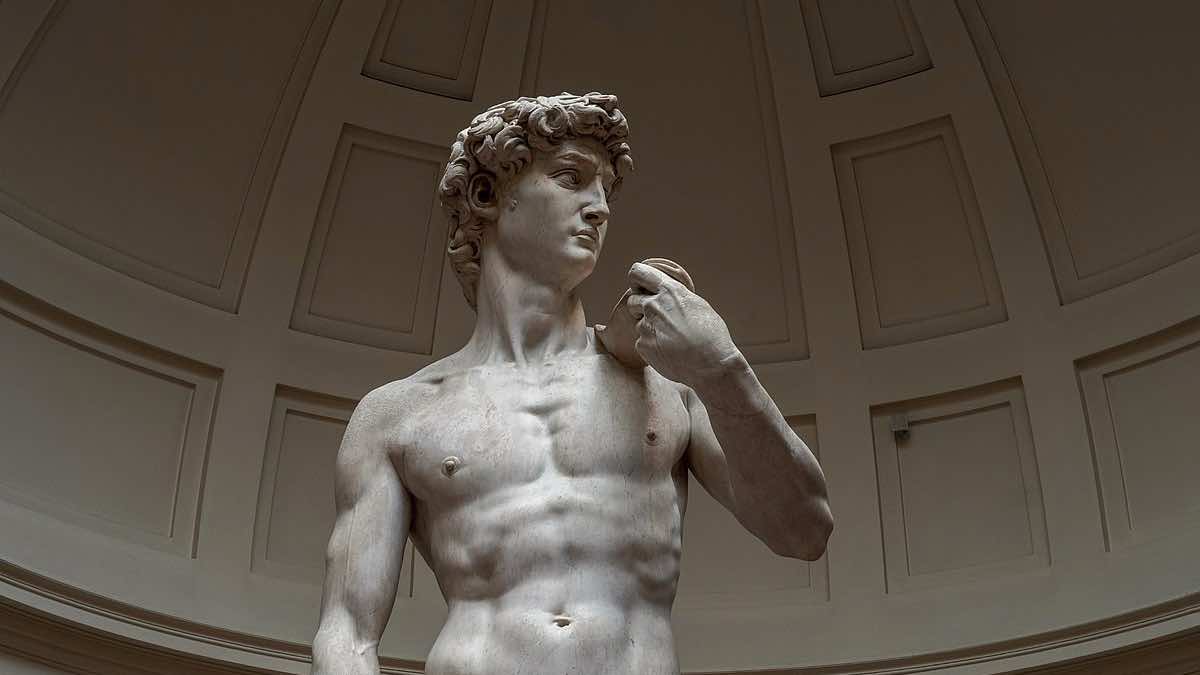