Home > Get inspired > The Pop Artists That Loved Food 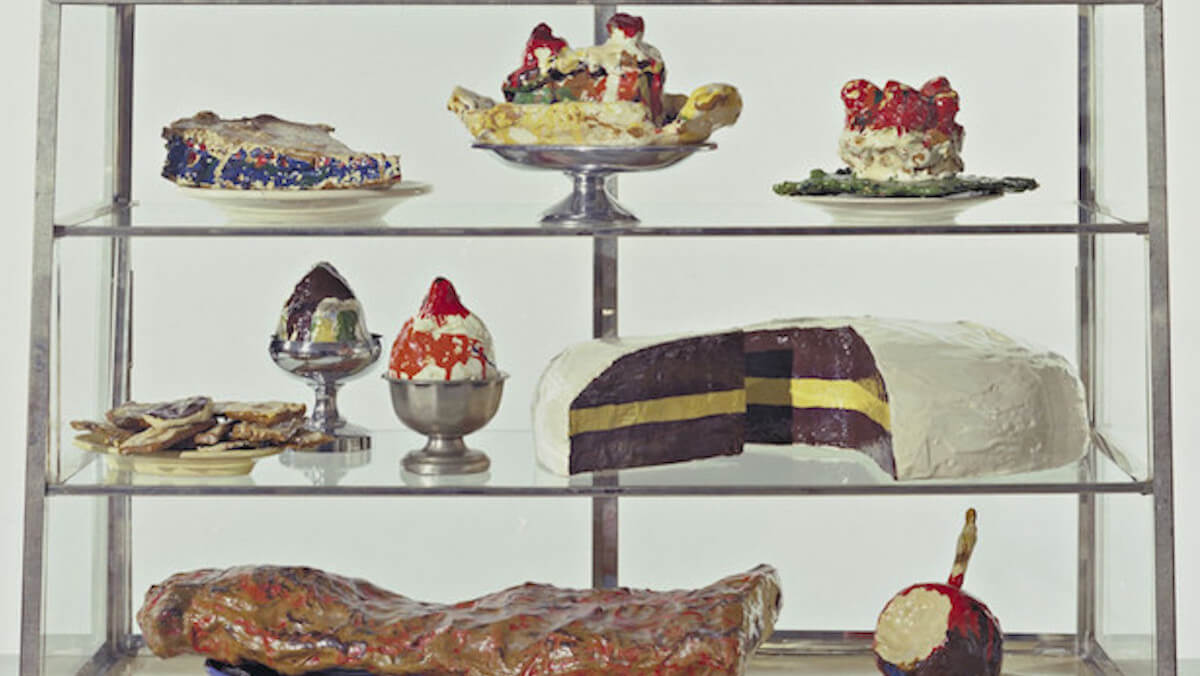 The Pop Artists That Loved Food

Food often makes its appearance in the world of art. Whether in 19th century still lifes or contemporary sculpture, this relationship has remained strong throughout the decades. But what is it about food that propels artists to use it as subject matter so often, regardless of style? And why were the artists of the Pop Art movement particularly obsessed with it?

The democratization of food products

In post-war America, the production of food skyrocketed after years of rationing, due to the advent of mass production. This meant that food became homogenized; the same factory-produced products were consumed by people of all wealth and social standings, from the president to the working classes.

The Pop Artists sought to represent the real, contemporary world through art. As the supermarket had become a staple of everyday life and a symbol of modern America, it also became central to the movement. Their work frequently depicted everyday food items using traditional artistic methods, blurring the boundary between “high” and “low” culture. An example of this is Andy Warhol’s famous Campbell’s soup can paintings. Whereas artists in the past often depicted expensive foods in order to display wealth, the Pop Artists depicted mass-produced products to challenge the elitist and self-serious art world.

Combining images of tinned spaghetti, a car and a woman’s lips, James Rosenquist’s 1961 work I Love You with My Ford embodies this tendency. This large-scale canvas may seem dizzying at first glance, and that’s the point. Inspired by modern culture, his works often layer and juxtapose visual motifs commonly found in advertising. This technique mirrors the overwhelming presence of consumerism in the modern world. Rosenquist was well versed in the world of advertising, having worked as a billboard painter in NYC. This influence is apparent in his paintings, which have a slightly blurred effect.


The Store: art as a commodity

While Rosenquist’s paintings are visually powerful, some Pop Artists used sculpture to push the boundary between art and consumerism further. In 1961, Swedish-American sculptor Claes Oldenburg opened a storefront in Manhattan to sell his work and titled it The Store. Sculptures of cakes, pastries, cigarette packets and lingerie filled the shelves, all available for purchase to the public. Advertising the exhibition-shop with posters and stationary, the artist bypassed the need for a gallery and became his own promoter.

With The Store, Oldenburg not only restructured the typical process of exhibiting and selling art, but also challenged the definitions of art and consumption. Representations of commercial products made out of plaster and enamel paint became art. Art became a commodity that mirrored the reality of the modern material world. In Oldenburg’s universe, the distinction between fine art pieces and everyday consumerism was blurred, offering a familiar but strange performance of contemporary life.

From the store to the supermarket

Three years later, The American Supermarket exhibition opened in NYC, which further explored the boundary between art and commodity. The exhibition was led by members of the Pop Art movement including Andy Warhol, Claes Oldenburg, Roy Lichtenstein and Tom Wesselmann, who had reached celebrity status by that time. Located at the Bianchini Gallery, The American Supermarket was set up as a mock-supermarket. Its shelves were filled with mass-producible products, from wax tomatoes and meats to printed shopping bags.

As well as supermarket products and shopping bags that were sold for as little as $2 each, The American Supermarket also exhibited iconic Pop Art works. Andy Warhol’s Campbell’s Soup Can painting, for example, was displayed on the wall of the exhibition. By placing pieces like these next to the original products they represent, the Pop Artists blended two seemingly separate worlds. Shopping was transformed from an everyday activity to an art form as collectors browsed shelves of goods.

Andy Warhol: the business of art

For Warhol, this crossover between art and commercialization was central to his work, which he called “Business Art.” Warhol not only depicted consumer products in his works, but also employed commercial production techniques like silkscreen printing. Mass-produced products like soup cans and Coca Cola bottles embodied an aspect of contemporary American culture that every section of society could relate to. Rendering them as artistic subjects and publicizing and monetizing his works as commodities, Warhol created a body of works that was as universal as the products it represented. In Green Coca-Cola Bottles, Warhol used the repeated image of the Coca Cola bottle to both critique and glorify the consumerist icons and advertising culture of post-war America.


A feminist perspective of food in art

While mainly based in New York, Pop Art’s influence quickly spread internationally. One of the rare European representatives of the movement is Belgian artist Evelyne Axell. Her work was influenced by various members of the New York art scene, such as Marisol Escobar and Andy Warhol. Axell was also heavily influenced by social and political movements of the 1960s, including the Black Panthers and feminism. She was experimental in her materials and techniques, often using collage to create effects of transparency and depth.

In Ice Cream, Axell plays with visual elements of food advertising and Pop Art to produce a work that places a woman at the forefront. The image is bold and provocative, contrasting figuration and abstraction as well as bright blocks of color and grayscale. Emphasizing the woman’s face, which is depicted in detail compared with the flat colors that fill the rest of the image, Axell draws attention to the subject’s emotive and individual qualities. Her downward gaze rejects that of the viewer, highlighting her role as the agent in her own pleasure and not merely a passive, sexualized object.

The art of modern life

In reaction to the Abstract Expressionist movement’s perceived inaccessibility and detachment from the real world, the Pop Artists sought to reshape the way art was perceived and consumed in society. Food, in its universality, was the perfect means to break down the barrier between the elitist art world and the everyday person’s life. Pop Artists like Warhol used recognizable images to hold a mirror up to contemporary life and consumerism in America. Through representations of food, they made tangible and valuable what had previously only been considered fleeting and mass-produced. 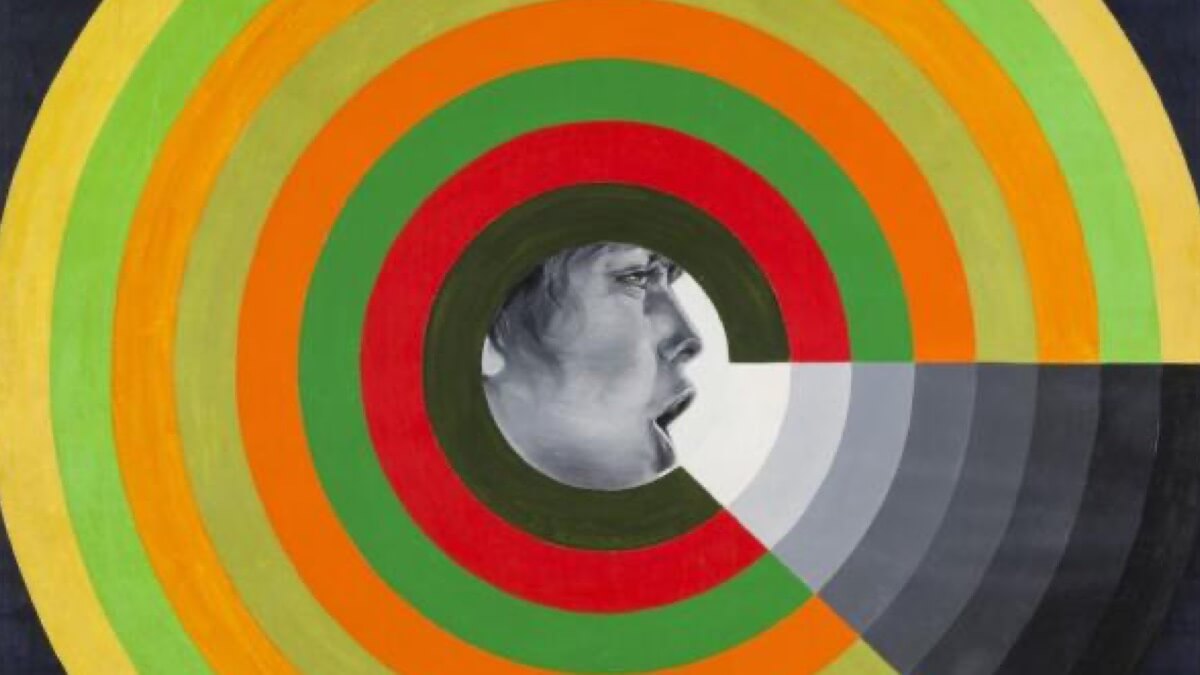