Frida Kahlo is one of the few female painters to be world-famous, while at the same time being one of the only artists in Mexico to be internationally known. The Mexican, the lame, the revolutionary, the non-conformist, the surrealist…so many adjectives to describe a woman who is above all free, singular both in her work and in her life. Indeed, hers is far from having been a long and quiet river! It has been brought to light many times through biographies and films. But do you really know her story? Artsper reveals 10 anecdotes from the life of this iconoclastic artist!

1. Frida Kahlo Is not of Mexican Descent.

Magdalena Frida Carmen Kahlo Calderón, of her real name, was born on July 6, 1907. She used to falsify her birth date, setting it back to July 7, 1910, the year the Mexican Revolution began.

She was born in Mexico City. However, she is not of Mexican origin! Her mother, Matilde Calderón y González, came from a family of Spanish generals. Indian blood runs in her veins as well. Her father, Carl Wilhelm Kahlo Kauffmann, was born in Germany. Contrary to what Frida claimed, he was not Jewish. Her family was Lutheran and belonged to the middle class of the Grand Duchy of Baden. When she arrived in Mexico in 1891, she took the name Guillermo Kahlo and settled as a photographer.

2. She Didn’t Have a Happy Childhood.

Frida Kahlo was born after her mother lost a son. Depressed, her mother gave her to a nanny. She was a very cold woman.

The atmosphere at home is particularly melancholy. Apart from tensions within the household of her parents and two absent half-sisters because they were sent to the convent, her father’s business was not flourishing during the Mexican revolution.

Moreover, young Frida’s health is fragile. She was born with spina bifida, deforming her spine, and at the age of 6, she contracts polio. Because of this serious infectious disease, she suffers from chronic pain. In addition, her right leg stops growing, causing a malformation. The disease also isolates her from other children. Nicknamed “Fria la coja”, meaning “Frida the lame”, she cannot go to school. Later, the first years of her schooling are tumultuous. She entered a German school according to her father’s wishes and was soon expelled for disobedience. This episode testifies to a strong and reckless character from an early age. She then enrolled in a vocational school for women teachers, where she also stayed for a short time. She was removed from the institution when her parents discovered that she had been sexually abused by one of the teachers.

3. She Almost Became a Doctor.

Frida Kahlo didn’t always aspire to be a painter. Certainly, from an early age, her father passed on his taste for fine art to her. A friend of her father’s, an engraver, even gave her a few drawing lessons. Also, she helps her father in his professional activity by retouching, developing, and coloring photographs. Nevertheless, she considers art more as a hobby.

At the age of 16, she was one of the first 35 girls to be accepted into the Escuela Nacional Preparatoria, out of a total of 2,000 students. It was the best school in Mexico at the time. There, she showed a strong interest in natural sciences and wanted to become doctor.

4. A Crash Bus Is at the Root of her Career.

On 17 September 1925, on her way home from school, her bus hit a tramway. This accident sealed her fate. Although she survived, she was nevertheless seriously injured. Her pelvic cavity was pierced by a metal bar, which would cause systematic miscarriages. She also suffers 11 fractures to her right leg. Her right foot is completely dislocated, while her shoulder is dislocated. Her spine and femoral neck are broken. Suffering excruciatingly, she remains in bed for several months. In total, until the end of her life, she undergoes 32 surgeries and will wear 28 corsets.

Back home, she is forced to stay in bed. At that time, she wrote: “I am not dead and I have a reason to live. That reason is painting”. Indeed, her medical studies being compromised, her family encouraged her to paint. They had her make a special easel and a canopy bed with a mirror as a ceiling. Art became the outlet for all her ills and the catalyst for her healing. She begins an important series of self-portraits. They will not cease to be her favorite subject.

5. Member of the Communist Party, she is a Pioneer Figure in Feminism.

At the instigation of the photographer Tina Modotti, she joined the Mexican Communist Party in 1928. She was only 21 years old at the time and was just recovering from her accident.

Nevertheless, her commitment to the defense of social justice and the promotion of Mexican culture had emerged as a teenager. Indeed, the Escuela Nacional Preparatoria praised the indigenismo. This nationalist ideology emphasized Mexico’s indigenous heritage to assert the country’s superiority and reject the Western colonialist mentality. Thus, Frida Kahlo and nine other female comrades formed an informal group called “Cachuchas” (literally “baseball caps”). Rejecting the conservative values of Mexico’s patriarchal and macho society, they discussed Russian politics and literature. Many of them became major figures of the Mexican intellectual elite.

Thus, within the Communist Party, in addition to class struggle, she was particularly committed to the emancipation and equality of women. She thus became a leading figure among feminist artists. Unsubmissive, protestant, and modern, she assumed her bisexuality at a time when few women dared to do so.

6. With Diego Rivera, she Embodies one of the Mythical Couples in the History of Art…

The year 1928 was also marked by her decisive meeting with the muralist Diego Rivera. He is 20 years older and also a member of the Communist Party. Putting his art at the service of the people by creating large frescoes commissioned by the government, he was already fully recognized. Their common passions for painting and politics and their respective admiration make them a fusional couple of artists.

Marrying in 1929, their relationship was both passionate and destructive. She confided: “I had two serious accidents in my life. One was caused by a bus, the other was Diego. Diego was by far the worst. Indeed, Diego cheated on her several times… and she did the same in return. In 1935, she saw her husband’s extramarital relationship with her sister as a real betrayal. Leaving the marital home for several months, their love remains unfailing. Frida also undermines her marriage by having an affair with the communist revolutionary Leon Trotsky. Indeed, in 1937, having been granted political asylum in Mexico, the Russian politician had been accommodated in their home. Divorced in 1938, they finally remarried in 1940, linked until their death.

The house in which they lived during their first marriage is symptomatic of their relationship. Consisting of two separate buildings, blue for Frida, white and pink for Diego, they are connected by a bridge. It is a metaphor for their couple: independent but inescapably united.

7. Frida Kahlo Is not a Surrealist Painter.

Traveling to Mexico City in 1938, the surrealist André Breton discovered the works of Frida Kahlo. Fascinated, he invited her to Paris in 1939 to take part in a major exhibition in Mexico.

However, both the city and the exhibition displeased her. The event was, according to her, a “smokehouse”. It was far too caricatured and picturesque of her nation. In addition, not all of her paintings were retained and her painting was misinterpreted. She feels that: “It’s not fair. I never painted dreams. What I portrayed was my reality. Indeed, for her, her paintings are, above all, autobiographical. Misunderstood, she rejects this group of scornful and pretentious intellectuals. On the subject of the Surrealists, she writes in a letter to Nickolas Murray: “I’d rather sit on the floor of the Toluca market selling tortillas than have anything to do with those lousy Parisian artists”.

Yet this visit to France heralds for her the beginning of international recognition. Admired in the Parisian art world, Picasso gave her ivory earrings in the shape of hands, fashion designer Schiaparelli made her the Madame Rivera dress and the Louvre bought her a self-portrait.

8. Her Works Are the Metaphorical Biography of Her Life.

Her work is inseparable from her life. From the very beginning of her artistic practice, immobilized after her accident, Frida Kahlo took her own image as her favorite subject. She depicts her moral and physical suffering without modesty or concession. Among the most famous, The Broken Column (1944) reveals her body bruised by a succession of surgical operations.

In all, nearly 70 self-portraits reflect her story. She portrays herself in retrospect, born then as a child, as in My Nurse and I (1937), and sometimes with her parents. She also portrays her couple and discusses their miscarriages, as in the painting Henry Ford Hospital (1932).

But it is more her “Mexicanness” that she claims in the representations of herself. It reveals her deep affection for her nation’s cultural heritage. In fact, she often wears the China Poblano, a traditional dress, very colorful and embellished with floral embroidery. Also, she frequently wears braids or buns decorated with flowers. More generally, in many of her paintings, Mexican culture is symbolized, especially by its fauna and flora. Parrots and cacti are integrated into her compositions, as well as other elements of local folklore (flags, exquisite corpses…).

Finally, her political commitment is also clearly reflected in several paintings. Her Self-Portrait with Stalin (1954) or Marxism will restore Health to the Sick (1954) bear witness to this. At the end of her life, portraying herself as a deer pierced with arrows or beside corpses, many evocations of death are perceptible.

9. She Lived in Pain all Her Life and Her Last Years Were an Ordeal…

Behind her optimism and unfailing joyfulness, Frida Kahlo suffers constant pain from her back to her feet. Her state of health deteriorated particularly from 1950 onwards. She underwent 7 operations on her spine. While her first monographic exhibition was held in 1953, her doctor forbade her to leave her bed. She then asked that her bed be moved to the gallery where she made a triumphant entrance, like a queen on her throne.

Shortly afterward, developing gangrene following one of her surgeries, she had her right leg amputated. This event caused her to sink into a deep depression. Finally, in 1954, suffering from pneumonia, she died a few days after her 47th birthday. Shortly before she died, she wrote: “I hope it will be a joyful exit and I hope I never come back. Waiting to die with open arms, the hypothesis of suicide is not totally excluded…

According to her wishes, she’s being cremated. She didn’t want to be buried lying down, having suffered too much from that position.

Subsequently, in 1943, the School of Fine Arts entrusted her with the teaching of painting in one of its classes. In 2010, for the creation of a new 500 peso banknote, the Mexican Federal Bank chose to decorate one side with her portrait and the other with that of Diego Rivera. Not only an icon in the history of art, but it also became policy in the 1990s for the Chicano movement, a movement fighting for the civil rights of Mexican-Americans.

To conclude, more than being an artist, Frida Kahlo is a symbol. A symbol of Mexico, she is especially a symbol for women. Her strength of character and independence make her an emblem for the feminist and LGBT movements. Having inspired many artists, her figure has also been re-exploited commercially. Printed on posters, mugs, T-shirts, and other goodies, she has, despite herself, become an icon of pop culture and street art. Without a doubt, the anti-capitalist that she was must be turning over in her grave by witnessing the misappropriation of her work and her image! But she would surely be reassured to see that her artistic and political influence has not waned. 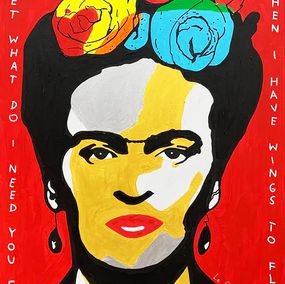 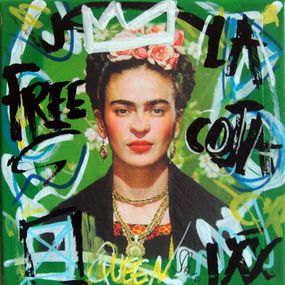 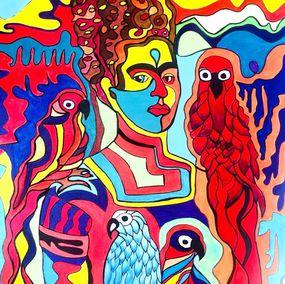 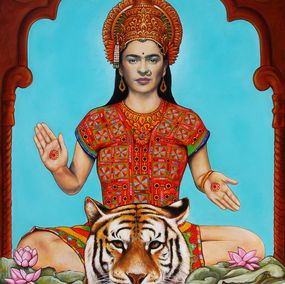