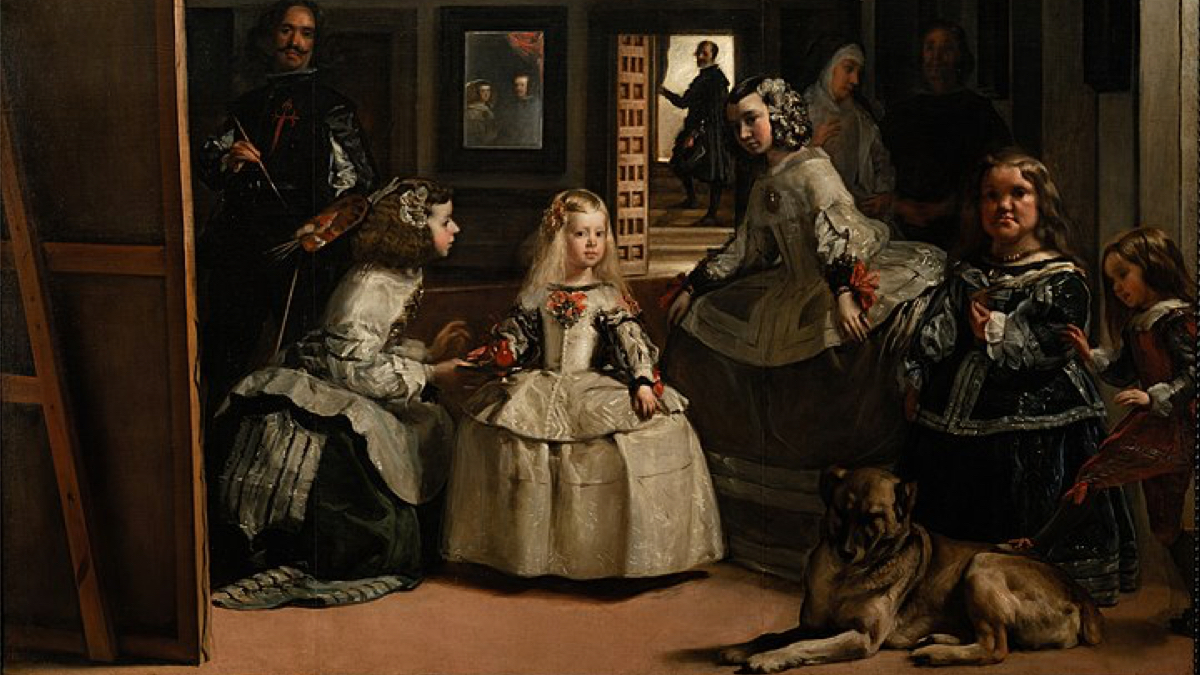 Las Meninas (1656) was painted several hundred years ago, during a period of prosperity in Spain under the ruling Habsburgs. Centuries later, this masterpiece by Diego Velázquez remains an enigma for discerning art historians who seek to uncover its mystery. Artsper invites you to dive into this famous and mysterious work by the great Spanish master!

The most famous of Velázquez’s career of portraiture is Las Meninas. Spanish royal family is its subject. The painting is a puzzle for the mind by way of the artist’s play with perspective. Velázquez cleverly fools around with the observer’s point of view, featuring himself as the artist within his own painting.

Currently situated in the Museo Nacional del Prado, scholars year over year try to dispel the painting’s mystery by answering some of the questions it raises. “Few paintings in the history of art have generated so many and varied interpretations as this, Velázquez’s culminating work,” wrote Jonathan Brown, a Velázquez art historian. Brown likened the study of the painting to a scholarly sickness. “LMFS” or  Las Meninas Fatigue Syndrome is cited by Brown due to the work’s nature as an inexhaustible enigma.

Who was the painter Diego Velázquez?

Diego Velázquez was the leading artist of the Spanish Golden Age of the 17th century. As the chief court painter to King Philip IV, Velázquez held a very great power. He was commissioned to paint many portraits of the Spanish aristocracy.

Born in 1599 in Seville, Diego Rodríguez de Silva y Velázquez’s family was one of Spanish nobility. At 11 years old, he showed an aptitude for painting becoming an apprentice to the painter Juan de Herrera. He went on to study under Francisco Pacheco from whom he learnt a technical mannerist style. In the early stages of Velázquez’s career in the 1620s, Velázquez’s work featured more biblical allegories. Think The Adoration of the Magi, 1619. Velázquez features subjects of ordinary life alongside religious figures in his compositions. Consequentially his work is one of consolidation portraying servants in scenes referencing the New Testament.

What do we see in the Las Meninas painting?

An intriguing group portrait, Las Meninas is composed of a strange cast of characters, including a princess, a nun, a dwarf and the Baroque artist himself. Las Meninas is set in Velázquez’s studio in Philip IV’s Alcázar palace in Madrid. It features a high-ceilinged room. Silvio Gaggi describes it as “a simple box that could be divided into a perspective grid with a single vanishing point.” In order to better understand the artist’s play with perspective, we must break down the painting into its constituent parts as numbered above:

The characters present in the composition of Las Meninas painting

Firstly, this busy portrait features the five-year-old infanta at its center. She would later married Holy Roman Emperor Leopold I but was at this point Philip and Mariana’s only surviving child. Her figure is painted in a much fairer tone of palette which aided by her central position, renders her as the painting’s central focus. Secondly, the inclusion of dwarfs in this painting testifies to the Spanish Royal Court’s fetish for court dwarfs. Numerous dwarves were present at court during the 16th and 17th centuries.

Thirdly, on the left of the scene, looking outward past a large canvas supported by an easel, we can spot the painter. On his chest is the red cross of the Order of Santiago, which he did not receive until 1659, three years after the painting was completed. Philip ordered this to be added after Velázquez’s death in his honorance.

Furthermore, in the distance, Nieto’s positioning is particularly intriguing. He is shown in a paused moment. With his right knee bent and his feet on different steps, his position is one uncertainty as to whether he is coming or going. The backlighting and open doorway draw the observer into the painting through this liminal figure’s distant gaze. The royal couple’s reflection, however, pushes our gaze back out of the painting in the opposite direction. Nieto is seen only by the king and queen. They share the viewer’s point of view, and not by the figures in the foreground.  Another painter that plays with the direct gaze of the subject and the perspective of the painting is Bartolomé Esteban Murillo in Two Women at a Window (1655-1660).

It is in the composition of this painting where the mystery lies. A radical departure from traditional royal portraiture, many have compared this painting to a photograph, in that it presents a wealth of action. At the same time, close examination reveals that it does not seem to follow the traditional rules of perspective. Without clear evidence of the artist’s intentions or the wishes of his patron, viewers and historians are left with unanswered theories and questions.

Of the nine figures depicted, five are looking directly out at the royal couple or the viewer. Art historians have suggested that the image of the king and queen is a reflection from Velázquez’s canvas. That this is a scene of a juxtaposition whereby Velázquez’s actual subject is not that which their daughter watches, but that of the royal couple. Others disagree, saying the canvas Velázquez is shown to be working on is unusually large for one of his portraits, and note that is about the same size as Las Meninas. Whilst there is much debate surrounding this matter, the resounding critical theory supposes that the scene is one of the King and Queen’s double portraits. This painting, however, contains the only known double-portrait of the royal couple painted by the artist.

So, what meaning does the title of the Las Meninas painting hold?

The title of the painting, “Las Meninas,” is Spanish for “The Ladies-in-waiting”. There is speculation as to why Velázquez chose to make the title of the painting about these two seemingly minor figures when there are the royal figures of the King, Queen and Infanta all present in this busy painting. The question is why focus on “las meninas”? “The picture seems more like a portrait of Velázquez than of the Empress,” Portuguese writer Felix da Costa commented upon seeing La Meninas in 1696. Although it was originally described as a painting of Philip IV’s family, in 1843, the work was dubbed Las Meninas in an effort to acknowledge its status as far more than a traditional family portrait. Thus the title, Las Meninas, is merely one of political grandeurification.

The style of the Las Meninas painting

The court painter is known for his characteristic Baroque style of painting that portrays a sense of grandeur, sensuous richness and drama. In his career, Velázquez began to experiment with tenebrism—a term derived from the Italian ‘tenebroso’ which means darkened and obscuring. It is used to describe a certain type of painting in which significant details such as faces and hands are illuminated by highlights which are contrasted with a predominantly dark setting. Velázquez is also known for his bold and expressive brushstrokes that embolden his dramatic style.

Further influence of the Las Meninas painting in contemporary art

Velázquez is also known for his bold and expressive brushstrokes, and thus became an inspiration to many 19th century realist and impressionist painters, as well as 20th century cubists and surrealists, such as Pablo Picasso and Salvador Dali, both of whom paid tribute to Velázquez by creating their own versions of his iconic paintings. During 1957 Pablo Picasso painted 58 recreations of Las Meninas. There has been a recent revival in contemporary artists revisiting the great masters of European artwork as discussed by this article. Here are some artists such as Abraham Dayan, Emmanuel Flipo and photographer Jacqueline Roberts who follow in Velázquez’s footsteps, embodying the Spanish master’s strong sense of light and dark contrasts and fluid, expressive brushstrokes. Go check out these modern artists inspired by the great master of European art!

In spite of its ambivalence—or perhaps because of it—Las Meninas has found its rightful place among the most well known works of the Western world. Now you know everything about this masterpiece of Spanish painting, are you a Velázquez fan? 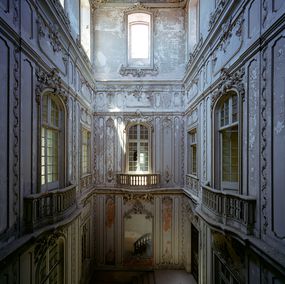 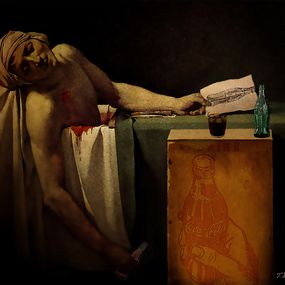 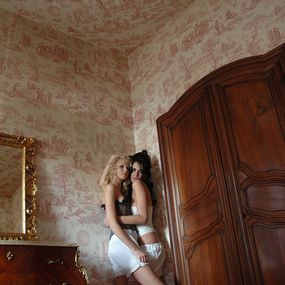