Where to find Art on the London Streets?

The Art Everywhere project launched in Great Britain was a real success. By putting up some works of art on advertising spaces of train stations, streets or also roundabouts, the organizers of this project succeeded in transforming London streets in art galleries during two weeks. But, like Paris, there are numerous places in London where works of art are accessible publicly and for free all year long. Artsper offers you here a selection of works exhibited (sometimes temporarily) to the londonian public.

Felice Varini
The Swiss artist Felice Varini recently made a installation at King’s Cross, visible until the end of October 2013. Commissioned by the artistic program RELAY, the artist has affixed on the frontages of several buildings like the “Fish and Coal Offices” some giant geometrical shapes playing on perspectives. Those zigzags meet at some points according to the place from where they are perceived. Felice Varini had already been known with his installation at the Grand Palais in Paris during the Dynamo exhibition.

Banksy
Walking in London streets without looking for Banksy’s frescoes is unimaginable! They have not been covered or savagely snatched. London is still overflowing with numerous works of art by the world’s most famous street artist. To help, use this Google map which will allow you to discover the main places where Banksy has grabbed people’s attention for the last few years.

Georg Baselitz – Untitled
The famous German sculptor set up in the John Madejski park a monumental sculpture representing three persons. Inspired by the Antonio Canova’s “Three Graces”, he introduces the classical themes of beauty, charm and joy. The untitled sculpture of Baselitz culminate at 10 feet high. It is part of a série of wood realisations and is different from the one of Canova by the contrast between the marble façade lisse and the rugueuse one of wood.

Richard Serra – Fulcrum
The Richard Serra’s sculpture named Fulcrum was made with 5 giant metal pieces. Although each one weighs several tons, they are simply put on each other. Peaking at 52,50 feet high, Fulcrum is atypic since Serra’s works of art are usually made on an horizontal plan.

Jake and Dinos Chapman – “The Good, The Bad, The Ugly”
As part of the program “Sculpture in the City”, the Chapman brothers’ metal monsters named “The Good, The Bad, The Ugly” are exhibited at the “Square Mile”. The sculpture is placed at the base of the well-known “Gherkin” at the heart of the City. We can also note the presence of other artists like Robert Indiana or Richard Wentworth. 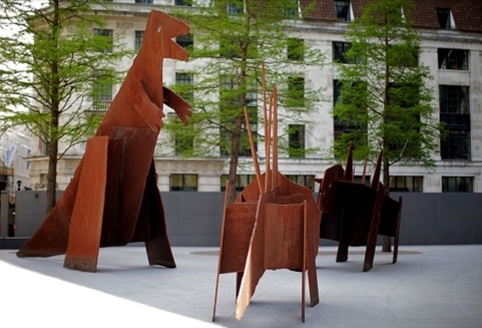 Hew Locke, Selene,
Ordered by the Nadler Hotel in Soho, the work of Hew Locke is a sculpture that is now permanent in Carlisle Street. The hotel wanted a work on the theme of Sleep. Inspired by New Art, Locke created a classical statue with a contemporary “twist”. Selene is the name of the Greek goddess of moon and magic. In Locke’s work, she floats at the heart of a galaxy of stars offering some garlands of magic potions associated to sleep and love. 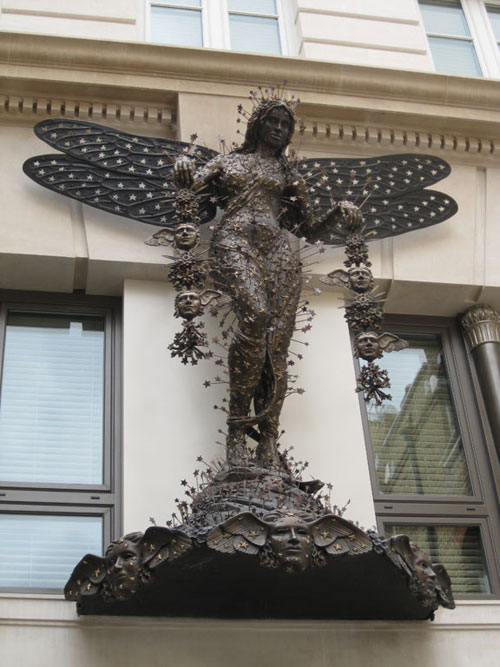 Ruth Proctor – “I see You Liking Everything”
The Londonian artist Ruth Proctor’s installation is exhibited as part of the “Bold Tendencies” initiative. Between two street lights in a parkway, the artist made a giant mask using metal pieces and tires. Proctor regularly uses the mask as a pattern in her works in reference to superheroes, illegality and secret. 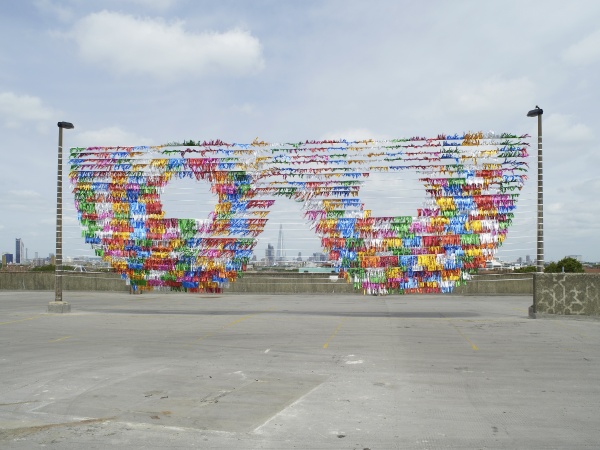