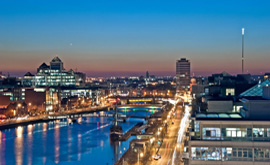 Dublin has nothing to prove as far as literature is concerned: land of great writers and poets such as W.B Yeats, James Joyce or Oscar Wilde, the city has been listed 4th city of literature by Unesco. However, contemporary art lovers will also find something of their liking in Dublin, where the local council is actively committed to promoting visual arts.

For those who are not so keen on the Guinness Museum, Artsper offers a tour of modern and contemporary art in the city of Ulysses, but not only!

IMMA is located in a building that dates back to 17th century. Its varied and interactive programming focuses on engaging the audience with art and promoting contemporary art. As the first national institution for contemporary art in Ireland, IMMA supports Irish contemporary art scene and artists in order to spread knowledge on Irish creation.

IMMA is home to the national collection of modern and contemporary art comprising 3,500 artworks of Irish as well as international artists. The museum is particularly up-to-date with the contemporary art scene and enrich its collection every year with artworks from 1940 up until today.

Currently, and until September 20th, an exhibition is dedicated to the Canadian photographer, movie maker and installation artist Stan Douglas: the first solo show of the artist held in Ireland.

Open since 2007 only, IMOCA is dedicated to exhibiting, educating and promoting innovative and experimental contemporary art practices. The museum focuses on dialogue and engagement with the audience. The museum receives almost no subsidies from the state and relies on self-financing, support from other cultural institutions, corporations and individual giving.

IMOCA supports the emerging art scene through an artist in residency program as well as lectures and workshops of all kinds.

Founded in 1823, the Royal Hibernian Academy was a reference in visual arts in Ireland all through the 19th century. The history of the place has been rather tumultuous since: reactionary at first, it has gone through a complete reshuffle over the 20th century. Today, its mission is to promote dialogue between traditional and innovative visual arts through a wide education and exhibition programming.

Dublin City Gallery The Hugh Lane is a museum art gallery founded by the Dublin city council in 1908 and dedicated to modern art. It is home to a rich collection of modern art given by its founder, Hugh Lane, as well as artworks from Irish contemporary artists. Francis Bacon’s workshop, rebuilt in 2001, is one of the jewels of the place, as well as the donation made by the painter Sean Scully.

Currently on show, and until October 4th, the exhibition « Hugh Lane (1875-2015) : Dublin’s Legacy and Loss » is an homage to the great philanthropist who founded the gallery and endowed it with his own collection.

Fringe Lab is a festival dedicated to performing arts launched in 1995 and held every year in September. Dedicated to emerging art, its programming includes dancing, theater, and music, as well as a wide range of art performances and events.

Fringe aims at being a platform for exhibition and dialogue about art. Fringe addresses the needs of emerging and established artists looking for a place to create and share their ideas by providing studio spaces. During the festival, all sorts of workshops, masterclasses and art events are held by Irish and international experts of the art world.

The Lab is Dublin city council’s art center located in the historical district of Monto. It includes a gallery, a rehearsal space and an incubator for a wide range of artistic practices. The Lab is mainly dedicated to promoting emerging arts.

The Lab organizes temporary exhibits, lectures, workshops and events of all types all throughout the year.

The Green on Red Gallery is an iconic institution in Dublin and is located in a warehouse downtown. It exhibits established international as well as Irish artists such as Gerard Byrne, Damien Flood and Nigel Rolfe. Every year, the gallery organizes 10 to 11 solo shows and two collective shows, in addition to roundtables, performances, concerts and projects in other locations.

The Irish capital city might not be the first place that comes to mind when we think about street art, but its scene has been growing over the recent years. With the growing support of the Dublin city council to visual arts, street art is not an underground practice any longer. The district around Camden street has become a safe haven for street artists and the Evolve Urban art agency connects artists with the community around special projects such as the one held during the Liberties Festival of 2014 and for which 15 murals were made in the surroundings of the Guinness museum.

Do not hesitate to embark on a street art tour to discover the town under another light. You will enjoy murals by Solus, Fitan Switzer or even James Earley!