Home > Get inspired > A Look at Miniature Art 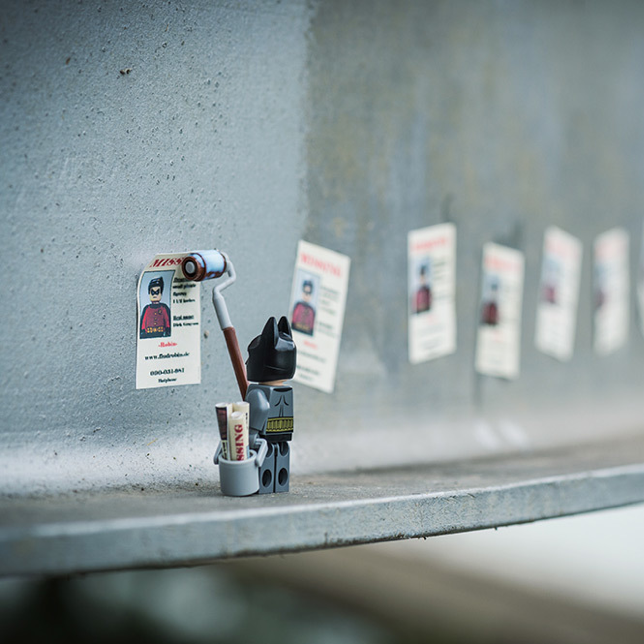 A Look at Miniature Art

If the point of art is to make us see life with different eyes, miniature art seems to achieve this goal like no others!

Miniature art toys with scales, wake up our child soul, makes us look at our environment under a whole different light and encourages us to pay a closer attention to our surrounding. Like Alice after eating a piece of the magic mushroom, spectators turn into giants looking at a microscopical universe in which a blade of grass is a pine tree, a puddle an ocean, and a soda can can become a spaceship fallen from Mars.

Artsper has selected for you 5 artists who have mastered the art of creating on a small scale!

Slinkachu is an English artist born in 1979. He launched the “Little People Project” in 2006. For this project, the artist created and painted small figurines that he placed in funny situations before taking them in pictures and leaving them in the street. Slinkachu likes working with the element of surprise in his work and wants to encourage town people to pay better attention to what surrounds them.

Slinkachu’s photographs often comes with eloquent titles. The scenes he puts up capture with humor the solitude and melancholy of big cities. Slinkachu wants the spectator to sympathize with his characters.

Pablo Delgado is a visual artist from Mexico. After moving to London for his studies, Delgado emerged in 2011 as one the most prominent British street artists. His work is conceptual yet accessible to a wide audience: he is mostly known for his miniature collage in which he uses popular culture images in humorous and surreal compositions.

Delgado collects his images from books, magazines and internet and take them out of their context. He juxtaposes them in order to create a multi-layer meaning to his work. The miniature scale of his work allows him to echo our current social and environmental issues. According to Delgado, the world is already full of discordant voices as it is, so instead of being more, Delgado tries to “be less”.

Delgado cautiously chooses the location of his artwork and generally plays with elements of the environment in his compositions. His work is ephemeral per se and seeks interactions with the viewer.

Isaac Cordal is an artist born in 1974 who uses miniature figurines placed in carefully chosen locations to spark the imagination of people passing by and t encourage them to look for his small-scale scenes at every corner of the city.

Isaac Cordal’s artworks aim at making us reflect on our degraded relation to nature through a critical look on the secondary effects of our evolution. He places his figurines with the precision of a stage director in a setting which then becomes an open door to other worlds.

Isaac Cordal often represents actions of our daily life, men and women suspended in time and often isolated. They capture the absurdity of our existence. Cordal’s characters are to be found in gutters, on the roof of buildings, bus stops and in many more incongruous places.

This series was inspired by the TV shows of his childhood and the dramatic as well as comical side of scale juxtaposition- a common device already used by Jonathan Swift in his famous Gulliver’s Travel.

Combining food and toys make Boffoli’s pictures accessible to everyone. In every culture, sitting down for a good meal makes us feel human. The sensitive experience of eating draws on our most primal instincts and brings us back to the beginning of our evolution. Food is one of the rare topics that everybody can talk about with passion yet without fighting. Therefore, Boffoli’s choice to set his series in the culinary world is no coincidence.

With the “Minimiam” series, these two professionals of food photography draw our attention on current issues such as global warming or our relation to nature while making us smile at the same time.

If the artist had not been present in this photo, you might not have even thought that it was a miniature building! And there is a reason for this, since Joshua Smith makes us rediscover the dilapidated streets of the big American cities using the smallest details: operational alarms, plastic bags lying around, stickers on the doors or the garbage cans, tags on the doors, automatic lights, rust… As viewers, we play the game and we look for these small realistic details…

A kitchen, gigantic eggs, a tree by the window… It’s easy to assume that the artist certainly created these sculptures of eggs to disturb the spectator and create an absurd scale, but you’d be incorrect! In fact, the set that is entirely miniature! Petros Chrisostomou creates miniature models, the size of a shoebox, and photographs them afterwards. He stages manufactured objects that have marked him as a still life artist. Between the real and the unreal, Chrisostomou plays with us!

When Picasso said: “Every child is an artist. The problem is to remain an artist when you grow up”, he had never met Samsofy! This artist takes his son’s legos to create funny miniature scenes involving superheroes, street art and other geek references, and we love to follow their misadventures.

Did you know that in another world, one where we’re 2 cm tall, we could interact with the greatest works of art history? This is what the artist Gaspard Mitz seems to want to show us in his sculptures in the form of boxes. His miniature characters interact with mythical works of art, from Hokusai to Lichtenstein through Yves Klein. And we can’t help but smile at these humorous scenes.

We’re all guilty of this during our work day. We get slightly distracted, so we play with our office tools. Sometimes we make two or three drawings on our notebook, we turn our pen in our fingers… Derrick Lin does the same but better, because with his desk tools he creates miniature and adorable scenes to which he adds small characters. You’ll know what to do when you’re bored in a meeting now!