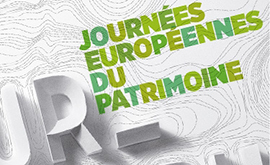 The weekend of the 20th and 21st September 2014, approximately 16 000 public or privates sites will be open to the public under the theme “Cultural heritage, natural heritage”. Artsper suggests 5 original discoveries!

Built under the Second Empire, the 32 kilometres of train line of the Petite ceinture (little belt) of Paris, carried travellers until 1934. Then, until 1970, they were used by the Citroën factories and the Vaugirard slaughterhouses. The City of Paris now takes care of this green and mysterious space, that is a conservation site for a number of fauna and flora. A guided walk along the abandoned train lines will allow you to discover this secret spot.

The visit begins at the Carnavalet Museum, dedicated to the history of Paris and its inhabitants. The journey then continues into the Catacombs of Paris, through the archeological Crypt of the Parvis of Notre Dame. A historical and original visit!

Starting point of the “route de Saint-Jacques de Compostelle”, this medieval tower allows you to admire this breathtaking and little known view of Paris. However, you will first need to climb the 300 steps!

No one would be able to guess the existence of the Montsouris reservoir beneath the heart of the capital. It is a treasure of industrial architecture and stocks 200.000 m³ of drinking water. Nicknamed the “water cathedral”, the lagoon-like colour of the water is quite surprising, as are its 1800 pillars! This water reserve supplies 20% of Parisians and keeps the water sheltered from the air, thanks to its ingenious architecture.

{The Stern Gardens in Saint-Cloud}

This garden was created by Jean Claude Nicolas Forestier in 1927 for Miss Stern. As the latter was handicapped, she asked that the garden be remodelled horizontally and with a slope. This garden is suspended and overlooks all of Paris. Most of the subjects drawn by Forestier still exist today, such as the two rose gardens and the aisle of lime trees facing the axis of the Eiffel Tower. This garden was classed as a Historical Monument in 2006.