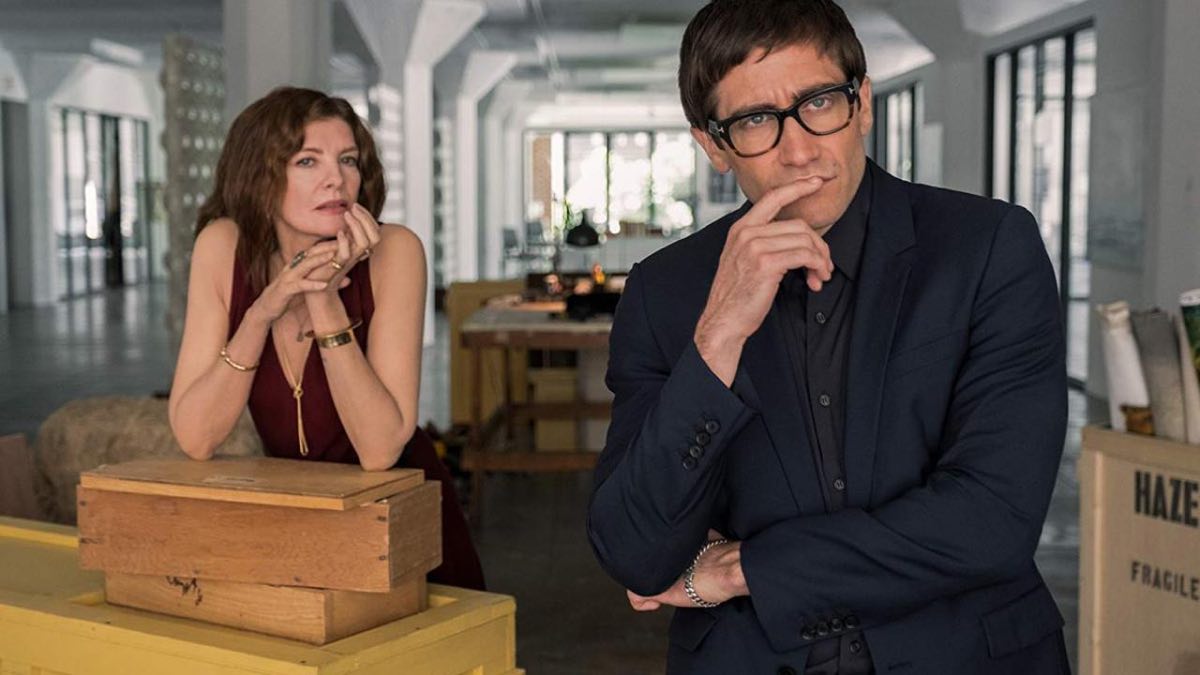 Pretentious, pompous, snobbish… We have all heard these words used to describe the contemporary art world. With its clichés and stereotypes, the art industry is an easy target for satire and comedy. Of course, the art world is so much more than these preconceived ideas. However, a little bit of self-mockery can be a force for good and can help us be more self-aware. With Netflix’s newest original movie Velvet Buzzsaw being released in February, Artsper has selected other movies, TV shows, and comedy shows that have playfully mocked the art world. Both satire and tribute, we hold no hard feelings for these portrayals!

Netflix’s new original horror movie takes a gore and humorous stance on the contemporary art industry. Set in Los Angeles, rich collectors rub shoulders with “big money artists,” and are willing to spend millions on artworks. Jake Gyllenhaal fabulously plays the story’s protagonist, Morf Vanderwalt, a renowned art critic who can make or break artists’ reputations. His script is peppered with lines like “critique is so limiting and emotionally draining,” which sets the movie’s sarcastic tone. The movie gets macabre when paintings by an unknown artist are discovered and a series of mysterious murders follow. In an off-the-wall manner, Velvet Buzzsaw is a satirical parable of the art world’s greed, and sheds light on some of the absurdity of the industry although perhaps some of the stereotyping goes too far.

The comedy Untitled stages Adam Goldberg as an experimental musician in a quest of artistic exploration and fulfillment. This fun and witty movie successfully portrays the complex aspects of the art industry. The movie’s director Jonathan Parker, resists the temptation of falling into the trap of being overly cliché. The movie shows both the commercial and artistic problematics of the industry, without taking cheap shots at the art world. From uncomfortable artworks (a nod to Damien Hirst‘s animals preserved in formaldehyde?) to experimental cacophonous music, the comedy delivers a keen and humorous account of the contemporary art industry.

The all-time highest-grossing French movie Intouchables did not spare the art world either. This cult scene shows how contemporary art can seem absurd and incomprehensible to some. The two characters, Driss, played by Omar Sy, and Philippe come from radically opposed social classes. Driss, compares the painting to a nose bleed, claiming “He could have done it himself”, a thought that has probably all crossed our minds at least once during contemporary art exhibitions. On the other hand, Philippe, a rich tetraplegic, is deeply moved by the painting. The scene demonstrates how subjective art can be and that each of us have different degrees of sensibility when confronted with a work of art. In a way, it also denounces the differences that may exist between social classes and their respective relationship to art. Culture and art education are still not equally accessible to all today, and this determines one’s understanding and sensibility towards it.

More of a dark satire than the others, this unconventional movie directed by the Swedish director Ruben Ostlund, and rewarded at the Cannes Film Festival plays with stereotypes surrounding the art world. The main character, played by the Danish actor Claes Bang, is the director of the Stockholm’s Contemporary Museum. He is a rich, high-class man, who is led to face his own cowardice after a young boy steals his phone and bag. Impossible not to talk about the ingeniously cringe-worthy and tensed 12-minute “monkey scene”, wherein the actor Terry Notary delivers an outstanding performance, terrorising the whole Swedish art world’s “crème de la crème“. Still, this unusual “Palme d’Or” divided critics; some praise it, other deeply despise it. In the end, isn’t that what contemporary art does too?

Saturday Night Live’s iconic sketches could certainly not miss out on depicting some of the incongruity of art dealers’ lifestyle. Between the less-than-handy furniture, eccentric fashion sense and affected accents, these art dealers seem a little unadapted to society: is it a satire on the praise of impracticability solely for art’s sake?