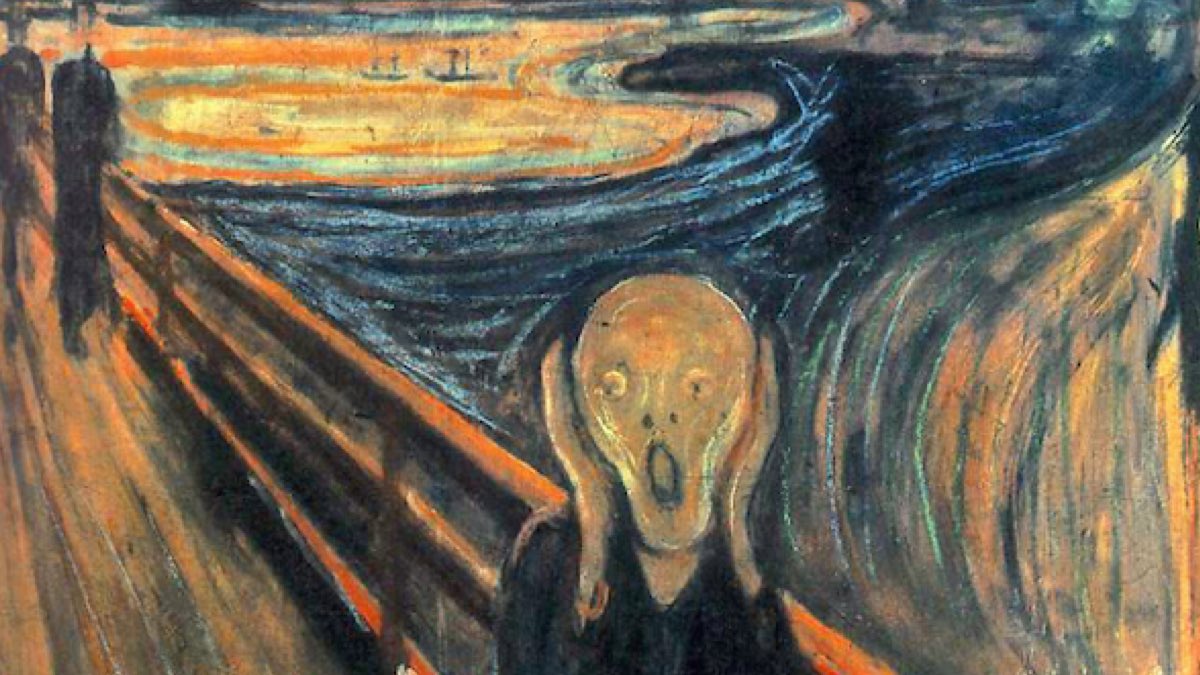 Perhaps one of the most famous works of modern art alongside Andy Warhol’s Campbell Soups and Pablo Picasso’s Guernica, Edvard Munch’s The Scream is instantly recognizable. The swirling sky in shades of red and yellow, the distorted, anxious face in the foreground, mouth frozen wide open, uttering what we can only imagine to be a chilling sound of distress. Even over a century after its creation, it hasn’t lost any of its power. It continues to resonate in today’s world as an expression crippling of anxiety.

A testament to its fame, in May 2012 the 1895 pastel-on-board version of the work was sold at Sotheby’s for US$120 million. This record made it the most expensive artwork ever sold at auction at the time. It is also hugely present in popular culture, from Kevin McCallister’s expression in Home Alone to the screaming face emoji 😱. In this article we’ll help you get to grips with this iconic artwork and you’ll soon be able to impress friends and family with your newfound knowledge.

The work is based on a vision

The Scream is essentially an autobiographical work based on a vision Munch had while out walking with two of his friends. He recorded the inspiration behind the work in a diary entry dated 22nd January 1892. The artist writes how “suddenly the sky turned a bloody red” and “the flaming skies hung like blood and sword over the blue-black fjord and the city”. He describes himself frozen and “trembling with anxiety” while feeling “vast infinite scream [tear] through nature.”

The oppressing brightly colored swirling sky and the curving landscape are reminiscent of the vision Munch describes. Munch portrays a world that seems to be spinning out of control. The figure, whose body mimics the curving distortions of the landscape, is firmly anchored to the chaos surrounding that surrounds. In stark contrast is the linearity of the bridge that cuts through the image from right to left, a man made creation not affected by the troubles of the environment around it.

Likewise, the two figures in the background, perhaps representations of Munch’s two friends seem, in their verticality, equally unmoved by the scream felt by the artist. The separation between these two parts of the image seem to hint that perhaps the distortions in the landscape and the figure are not seen but indeed felt, as Munch describes in his diary entry. This gives way to an interpretation of the work as a depiction of internal struggle, anxiety and confusion.

An inner struggle depicted through art?

Munch’s life was marred by tragedy, he lost both a mother and a sister early in life, his father suffered with depression, one of his sister was instutionalised for mental illness and his brother died as a young man. Munch himself had a fragile physical and mental health and struggled with alcoholism. These biographical details are often posited as the main explanation for the artist’s expressionist works but in reality it may not be that simple.

Munch was an artist and a thinker, not only preoccupied with his own life but more generally with society and the world around him. The symbolist movement of the time encouraged artists to look inwards for inspiration, something that Munch might have channelled in his works. Furthermore, the late 19th century saw the beginnings of psychiatry and psychoanalysis as ways of understanding human nature and experience, and these new theories may have very well inspired the artist.

So while the painting should still be seen as a portrayal of Munch’s feelings, that is not all it boils down to. In fact, the depersonalisation of the figure in the foreground could indicate a wish to turn the work towards a more general audience.

Art historians have tried explaining the work in other ways. For example, the bright colours of the sky might have been inspired by the impressive sunsets which occurred around the world after the eruption of a volcano in Indonesia released volcanic dust into the atmosphere. The figure has also been likened to a Peruvian mummy which was on display during the 1889 World’s Fair in Paris.

Munch created four unique versions of the scene as well as one lithographic version in 1895. The first work was completed in 1893 and is done on cardboard using oil, tempera and pastel. Two pastels versions were made in 1893 and 1895. These were followed some time later by a tempera painting. Munch was interested in the expressive possibilities of the various mediums. His frequent use of the same subject matter shows the extent to which the work and its themes, namely life, death and anxiety, preoccupied him during this period.

Despite Munch’s obsession with this particular scene over a number of years, he rarely returned to the highly distorted style in other artworks. The Scream is Munch’s most unrealistic work. The depths of the distortion seem to have troubled the artist. On one of the versions owned by the National Gallery in Oslo he wrote “can only have been painted by a madman”. Even during the 1883-1910 period during which he created several versions of the work, Munch continued to paint portraits of friends and family as well as gentle landscapes and waterscapes. 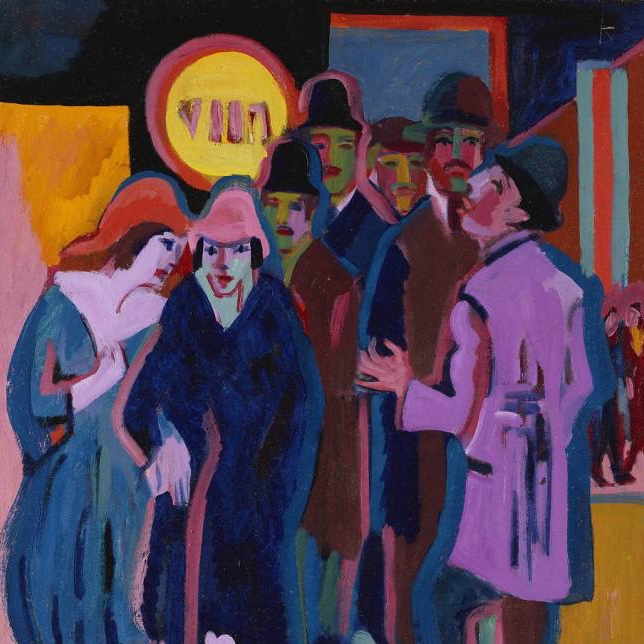 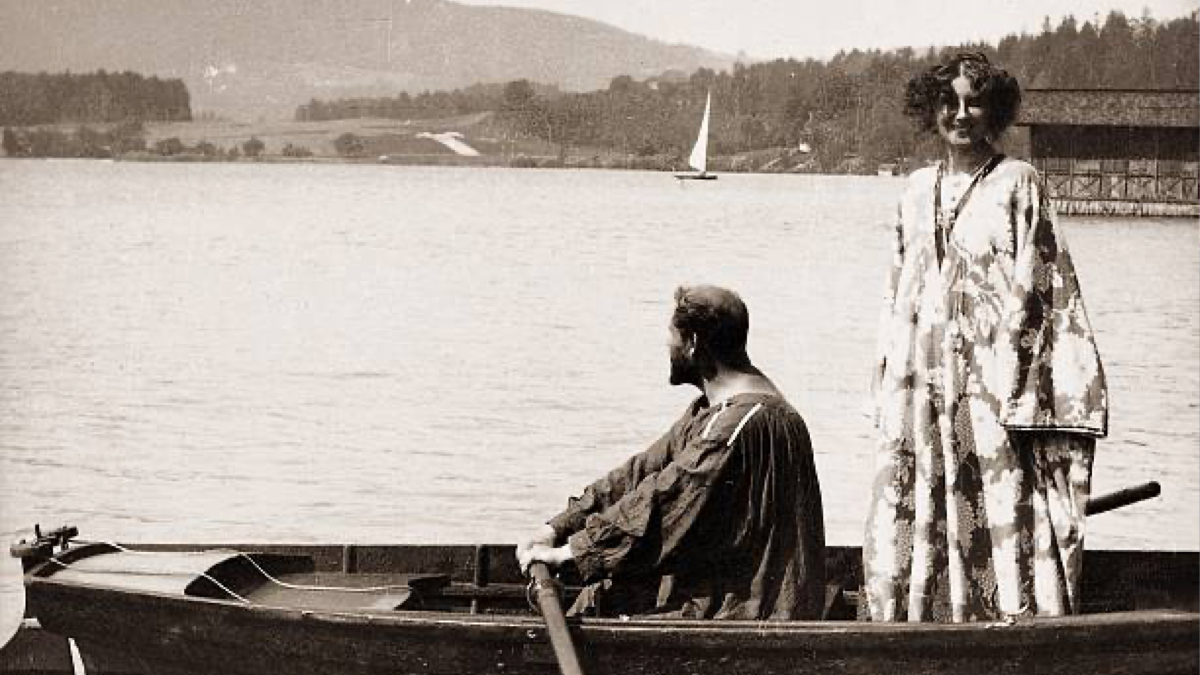