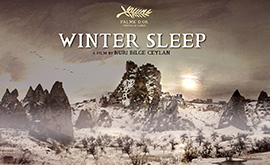 The main character, Aydin, is a former star of Turkish theater. Upon retirement, he moved to open a cave hotel in Cappadocia, central Anatolia. In this region, real underground cities were built in the soft rock. At the time, these cave dwellings allowed protection from invasions and the whims of the weather.

Aydin is a tortured man. From the beginning of the story, the man is confronted with his contradictions. Owner of a large part of the village, he does not involve himself in the conflicting relationships he has with his tenants, leaving those tasks to Hidayat, the handyman. His family also pushes him to his limits. Dreaming of fame and recognition, his relationship with his divorced and depressed sister remind him of his ordinary human conditions. His wife, much younger than he, seems locked into this routine and his daily life seems devoid of meaning.

Aydin’s strength lies in his ability to act. The beauty of his face and the accuracy of his words are illusion. He seems warm, young, confident, determined. In reality he is not. Some clues prove his deceit – he is falsely welcoming while serving tea to a tenant he hates, he relegates all the wrong tasks to Hidayat. A simple reply requiring a bit of morality and the real him is unmasked. Aydin is lying to himself and will only half-admit it.

His wife Nihal confronts Aydal, she too tortured. Emptied of joy by a bleak existence, she draws her strength from charities she supports throughout the region. Contradictorily, she denies her husband access saying he is not interested enough in the causes. Yet Aydin’s fortune could contribute to her projects. But proud and extreme in her commitment, she refuses to share anything with her husband, who is slowly becoming a stranger to her. Nihal is afraid and does not dare leave Aydin, who offers her material comfort she would surely not find anywhere else.

“My kingdom is small but I am king” The two women in the life of Aydin successively try to bring him down from his pedestal in vain. The man, despite the qualities of justice and generosity, tends to stifle his close ones with his pretentiousness. Power relations end with no winner. The viewer swings between appeasement and disillusionment, constantly torn between class struggles and egos.

Would not it be better to face the harshness of life rather than be lulled by illusions, as Aydin or Nihal have been? The remorse they feel is inevitable. Despite, the film has an artificially happy ending. Aydin finds the family home, silently declaring his love for Nihal, who will inevitably continue to hate him. One imagines that he lives on, full of regret and shame for having unsuccessfully tried to ease his conscience. Disturbing.