Home > Artstyle > Zevs at the Vitrine AM 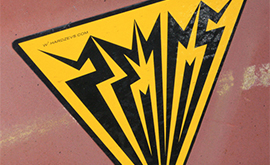 Zevs at the Vitrine AM

A natural extension of the contemporary art agency L’art en direct and of its concept of art as a communication tool for businesses, La vitrine am focuses on the exciting relationship between art and brands, and offers it a unique territory of expression. A true receptacle of the meeting between artists and companies, the space has an eclectic and evolving program.

For its eighth project, La vitrine am invited ZEVS, one of the major figures of international street art. Christophe Aghirre Schwarz was born in 1977. The French artist became famous in the 1990s for his various works in the city of Paris. He chose ZEVS pseudonym as a “tribute” to the RER A ZEUS that almost hit him in 1992 he was working on a graffiti. ZEVS is also an acronym and it means “area of visual and sound experiments”.

At the end of the 1990s, he formed the artistic mini-collective @nonymous together with Space Invader. They “invaded” the city of Montpellier in August 1999. Zevs responds with his “surlignages” (a term coined Alain Milon) to Space Invader’s mosaics. At first he spray-paints a sort of logo or monogram (a cloud with two flashes and the letters Z, E, V and S) and then he draws on the ground, in silver, the shadows of the street furniture. Today works in Paris and Berlin.

The RETROVIZEVRS exhibition questioned a new aspect of the relationship between art and brands. Between love and hate, don’t brands need the artist to confront, destabilize and allow them sometimes to renew themselves? On the other hand, could brands be catalyzers of artistic creation?

The artist, sometimes feared or criticized by brands, maintains an ambiguous relationship (an almost passionate one for that matter) with them. Abused and hijacked, they are at the heart of his practice. ZEVS is probably the first graffiti artist to have conceptualized and intellectualized the very action of vandalism and thus to have elevated it to the rank of contemporary art. From sidewalks in the city to gallery walls, he interacts with the urban signs and codes of consumption; he questions public space, art and his relationship with society. In 2005, he became interested in the symbolic tole of the logo, that he marks, destroys or kidnaps. Aware of the power of attraction of advertising that he diverts for his benefit, he questions it and uses it as a means of expression.