Movies, like art, play an important role in our visual vocabulary. Ultimately, cameras and paint brushes fulfill the same purpose: portraying a reality like ours, or one we wouldn’t otherwise be able to see. Check out how these two genres come together, with Artsper’s top 10 picks for famous artworks in movies… So, ready to test the cinephile in you?

In this cult classic, Eva Green and Louis Garrel form an unforgettable pair that profoundly impact an American expat’s experience of Paris. The adventurous duo, never ceasing to incorporate art and culture into their rebellion, decide to recreate a scene from Godard’s famous Band of Outsiders. The movie thus successfully references two different art genres at once, with a nod to New Wave cinema and art history’s neo-classical masterpieces.

In the footsteps of Anna Karina and her accomplices, the three characters run across the Louvre’s gallery, hoping to beat the world record of 9 minutes and 28 seconds. Through their scream-filled sprint and the glares of those watching, a certain hypocrisy is brought to light. How much time do people truly spend in front of an artwork? Although we imagine it is a difficult number to calculate, the estimate is 3 seconds per artwork… Perhaps this is what the directors were getting at when blazing past the artworks, giving us only a few seconds to admire Jacques-Louis David’s Le Serment des Horaces.

The movie Personal Shopper from 2016 far surpasses the limits of the fashion industry. Olivier Assayas offers a film that considers loss and the lengths someone will go when faced with its intensity. Kristen Stewart plays Maureen, the main character and personal shopper who has recently lost her twin brother.

Certain elements prepare us for the spiritual, otherworldly phenomena that will shortly arise. One of them is Maureen’s quick page-turning of an exhibition catalogue, dedicated to the works of Hilma af Klint. Although this may not appear directly related at first, Klint’s artwork is more than a mere prop in this scene. Eerily ahead of her time, the artist anticipated abstractionism and engaged with other, more spiritual forms of representation. In other words, she sets the stage for the ghosts we’ll come to meet and the mysticism that continuously guides the narrative of the film.

Woody Allen’s Midnight in Paris provides a much more obvious example. The entirety of the movie revolves around art, its masters and influence across time. Faced with characters such as Pablo Picasso and Salvador Dali, it is no surprise when we see their works appear on the screen.

However, before the film becomes the artistic past we believed to be lost forever, art has already made its way into the plot. As Gil and Inez, our main characters, roam around Paris, they inevitably stop by the Musée Rodin. Known for its outdoor sculptures, the museum provides an interesting backdrop for an intellectual dispute over Rodin’s life story. As the conversation takes greater proportions, we come to recognize that the experience of viewing art needn’t always be informed by biographical details. Most of the time, masterpieces such as The Thinker can stand on their own, only heightened by the additional information of their origin.

Across the years, we’ve seen multiple James Bonds and even more backdrops for his perilous adventures. Yet, as Daniel Craig’s character fears, the old is always up against the new. Perhaps this is why 007’s first meeting with Q takes place at the National Gallery in London. Seated in front of J.M.W. Turner’s The Fighting Temeraire (1839), the two discuss the limitations of youth and the strengths of experience.

This conversation is of course reflected in the painting before them, as Q takes on the role of Bond’s new Quartermaster. The technological advances he represents are synonymous with the forces that take down the “great old warship, being ignominiously hauled away for scrap.” Once again, the artwork is not only serving a decorative purpose, but actually contributing to themes in the plot.

This 1986 classic provides quite a different museum scene. During their self-inaugurated day off, Ferris, Cameron and Sloane head to the Art Institute of Chicago. Across a few shots, the museum’s extensive collection is seen on screen. Soon, the characters themselves become art-like, posing in perfect alignment with the rules of perspective.

As they each branch off, Cameron finds himself face to face with Seurat’s A Sunday Afternoon on the Island of La Grande Jatte. This masterpiece of Pointillism seems to speak to the character’s angst, and specifically to his fear of disintegration and meaninglessness. John Hughes, the film’s director, accentuates this point by gradually zooming into the artwork, revealing its elemental point-based nature.

A Sunday Afternoon on the Island of La Grande Jatte also stands as one of the earliest representations of leisure, especially within public spaces. This remains, after all, the essence of Ferris Bueller and his unforgettable day off…

Wes Anderson approaches his work with the same degree of aestheticism as some artists. As a result, it may not be entirely surprising that artworks find their way into his films. In The Grand Budapest Hotel, it’s Boy with the Apple by Johannes Van Hoytl. Gustave, the hotel’s invaluable concierge and his apprentice Zero spend a good deal of the movie chasing after the painting. If you had some artistic doubts, you’re not alone…

Although it appears to be veritably inscribed in the artistic tradition, the artwork was in fact commissioned by Wes Anderson in 2014. It’s not the work of a Northern Renaissance painter, but rather that of Michael Taylor, a 21st century British artist.

Despite the nature of its existence, the artwork nevertheless plays a crucial role in the film. It begs the question: what does it mean when art is created for cinematic purposes? Julian Schnabel’s Basquiat is a famous example of this. Unable to show the works themselves due to copyright issues, Schnabel had to recreate Basquiat-inspired paintings for the film.

The first scenes of Pierrot le fou begin with Jean-Paul Belmondo in the bath, reading from his copy of Elie Faure’s Histoire de l’Art. An essential reference within art criticism, this book reappears across the film in the form of different passages. A few moments later, in Marianne’s apartment, art meets film once more. With posters and postcards, we recognize the works of Henri Matisse and Pablo Picasso spread across her bare walls. Although it may not be glamorous, Godard’s choice of decor for Marianne’s apartment more closely resembles how many of us appreciate masterpieces: from a distance. Who hasn’t displayed their adoration for an artist in a gift shop?

Among the numerous artworks displayed, there’s Picasso’s Portrait de Sylvette (1954) and Jacqueline aux fleurs (1954). Godard strategically places these two left-facing artworks side by side, with Pierrot looking in the opposite direction… In cinematographic fashion, Godard creates art from art, relying on Picasso’s work to compose his own masterful frames.

8. Once Upon a time in Hollywood…

Quentin Tarantino’s latest movie is a cinematographic love letter to the Hollywood of the 60s. In this self-reflexive tale, we’re met with reality-inspired characters such as Sharon Tate, along with other, more fictional ones, like Rick Dalton or Cliff Booth. Throughout the film, Tarantino makes an art of weaving the new and the old, the real and the fictional.

With an almost chameleonic effort across the film’s set design, all the visual cues are set in place to transport us to a Hollywood that no longer exists… The music, like the cars, have only aged for better. Punctuating the plot, a certain Paul Revere & The Raiders record gives us a glimpse into Sharon Tate’s private life. With the first few notes of “Good Thing,” we see the actress played by Margot Robbie start to feel the groove; a rare glimpse into the personal routine of someone at the height of their fame. As she’s bobbing her head, L’automne by Alfons Mucha can be noticed in the background. Through her tastes, both musical and artistic, Sharon Tate becomes more than just a two-dimensional character or  actress, she becomes a person.

Whether it be on the walls of the Tuscan villa or in the form of the professor’s research, art is ever-present across Luca Guadinigno’s Call me by your name. The Perlman family approaches art as they do food, music or literature: with extreme awe and pleasure. Among the posters in Elio’s room, one finds the eclectic mix of Peter Gabriel, Mario Metz, The Wounded Man and Venice’s Biennale. Between art and music, there’s even room for some athleticism, as seen with the French Open’s Roland Garros print from 1981.

Elio’s room soon becomes Oliver’s, the visiting doctoral student played by Armie Hammer. The result is a kind of mélange between the two. Elio’s interests and belongings seep into Oliver’s and vice versa, eventually leading them to call each other by their names.

Similarly to other examples of art in movies, these prints and posters very much delineate the time period of the movie. With Eduardo Arroyo’s edition for the Roland Garros, we get a specific date in time, helping us to better situate when this paradisiac summer took place.

Through Baz Luhrmann’s modern interpretation of a literary classic, many have wondered if historical accuracy is all it’s made out to be. As with previous examples, when we find art in movies it’s rarely accidental. Usually, it’s there to serve a specific purpose. “Baz had no overt desire to modernise The Great Gatsby. Rather, he wanted modern audiences to understand how modern the Gatsby world felt to its protagonists at the time,” shares Catherine Martin, the film’s set director.

Set in the 1920s, Luhrmann’s The Great Gatsby somewhat bends time. The decor abides to the style of the era, but the overlapping music has the lyrical cadence of Jay-Z. How does one balance these two contradicting time frames? If you’re Baz Luhrmann, perhaps by accentuating both. As modern as the soundtrack or inflatable pool toys may be, the art that ornates the wall remains purely classic. One need only look to find the English painter George Stubbs and his Lion and Lioness. As kings of the animal kingdom, the two animals surely represent Gatsby’s status and romantic ambitions.

There’s a certain thrill that comes with spotting art in movies… Perhaps it’s the removal from typical settings, allowing us to see art on screen instead of within the usual museums and galleries. Or maybe it’s the meeting of two art forms, building off of each other to produce something even better. Either way, the intersection of cinema and art far exceeds the few examples listed above. To discover more, find out which 10 movies were inspired by famous artworks with Artsper… 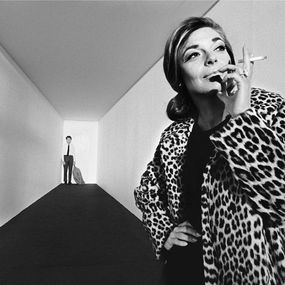 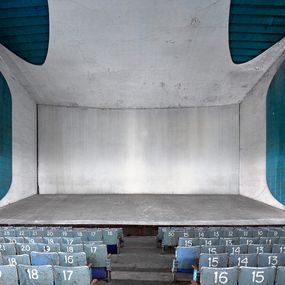 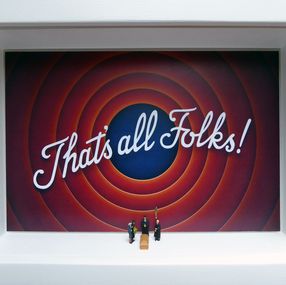 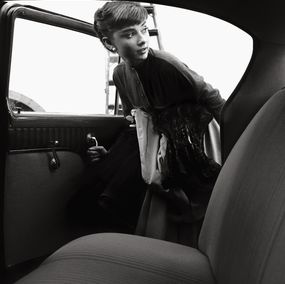