Vienna has been the capital city of Europe’s intellectual life for centuries : place of birth of the Art Nouveau movement at the beginning of 1900, it is the reference city for big names of modern art like Gustav Klimt, Egon Schiele and Oskar Kokoschka. Because of its long and rich history, Vienna is quite THE cultural destination, and it is a challenge to make a top 10 of what to see, given the abundance of options.

However, Artsper has made a humble attempt at giving you a panorama of the spots not to miss in this town for modern and contemporary art lovers!

Vienna is inaugurating this year the first edition of its Biennale (from June 11th to October 4th). The event is multidisciplinary, and aims at opening a dialogue between art, design and architecture. Its philosophy? “Ideas for change”. The event focuses on our changing society and on the way that arts can bring answers to the world’s current issues. On an artistic level, it means that digital artworks are the center of attention.

Four major institutions of Vienna will stage this unprecedented event: the MAK (Austrian Museum of Applied Arts), the Kunsthalle Wien, the « Angewandte Innovation Laboratory » at the University of Applied Arts Of Vienna, and the Architecture Center of Vienna. Additionnaly – there will also be performances and events in many public places.

The programming is rich and varied: from exhibitions tackling the world’s current issues (such as overpopulation with « Uneven Growth: Tactical Ubranisms for Expanding Megacities » at the MAK), to lectures, performances, roundtables and workshops of all kinds.

You know it already, the Belvedere Museum is simply a must-see in Vienna. Former summer house of the prince Eugene of Savoy, this museum holds the most comprehensive body of work by world-known artist Gustav Klimt – the highlights of the collection being “The Kiss” and “Judith”- as well as major works by Schiele and Kokoschka.

But you will also be able to admire masterpieces of French impressionism and the Biedermeier period of Vienna, along with a collection of works from the flamboyant gothic and the baroque period for those who appreciate ancient art.

This summer, the Belvedere Museum is hosting an exhibition entitled « Klimt and the Ringstrasse- A showcase of Grandeur », which will showcase the production of artists from the prosperous period of the building of Vienna’s Ring such as Hans Makart, Gustav Klimt and his collective of painters, the “Kunstler-Compagnie”. The exhibition will also give a glimpse of the lifestyle of the era. 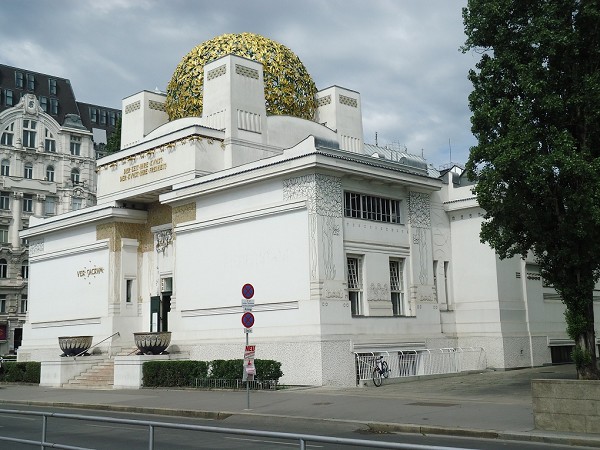 As for the Belvedere Museum, one cannot claim to love art and pass by the Secession Building in Vienna. Built in 1897 by Joseph Maria Olbrish, it is the architecture manifesto of the Secession, which led to the Art Nouveau movement conducted by Gustav Klimt.

The characteristics of the Art Nouveau movement was the desire to combine art, architecture and applied arts into a “total art style”. The motto of the movement was: “”To every age its art, to art its freedom” (Ludwig Hevesi)” and its main representatives were Gustav Klimt, Josef Hoffmann, Otto Eckmann, Josef Maria Olbrich, Koloman Moser, Oskar Kokoschka, and Egon Schiele.

Pieces of the famous 34 meter-long Beethoven frieze are kept there: a visual interpretation of Beethoven’s 9th symphony made in 1902 by Klimt and considered one of his ultimate masterpieces.

The Secession Building also hosts temporary exhibitions: until October 11th, you will be able to visit an exhibit dedicated to architecture within the Secession movement and entitled « Too modern for the first row : the architectural history of the Vienna secession ». 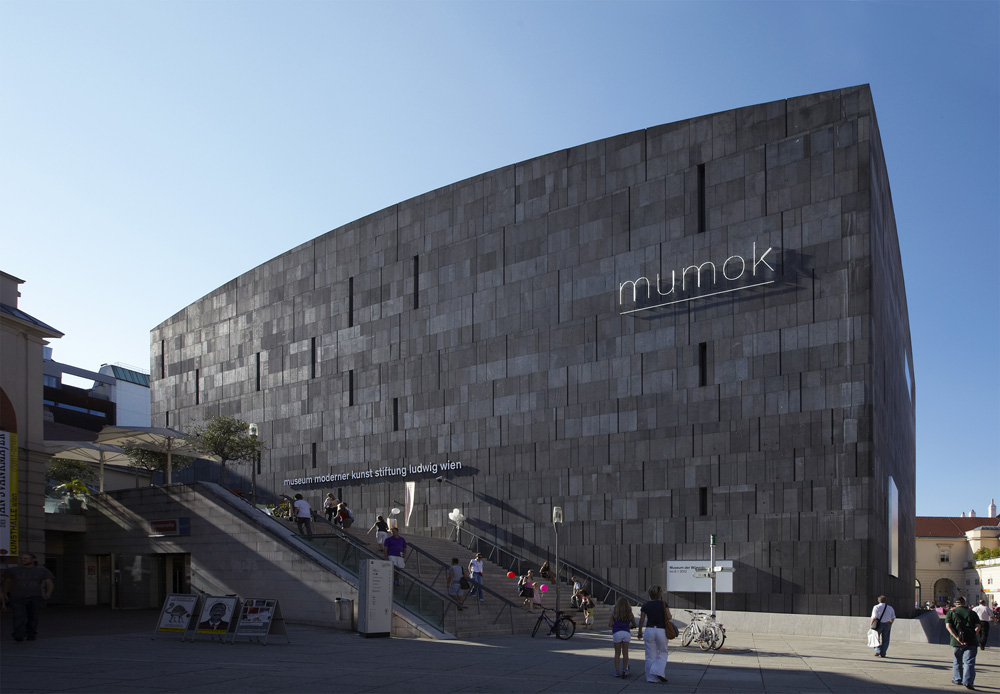 The MUMOK is located in the museum and historic district of Vienna ; it is the largest museum of modern and contemporary art in Central Europe with collections spanning from Austria avant-garde to the main trends of 20th century’s art : Cubism, Futurism, Surrealism as well as Pop art, Fluxus and New Realism. The museum holds works by artists such as Kandinsky, Paul Klee, Kokoschka, Fernand Léger, René Magritte, Roy Lichtenstein and Francis Bacon

The MUMOK owes a part of its collection to the long term loan of the Ludwig Foundation, which provided an additional 10,000 pieces to its collection.

On view this summer, an exhibition entitled “Ludwig Goes Pop” (until September 13th) will present the impressive pop art collection of the German industrialist and his wife Peter and Irène Ludwig. About 100 works from the most famous pop artists (Robert Indiana, Andy Warhol, Roy Lichtenstein, James Rosenquist, Jasper Johns etc.) will be on display from six major institutions related to the collecting couple. 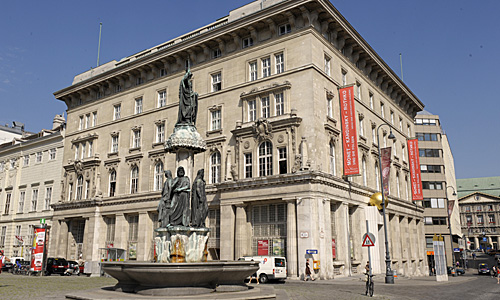 The Bank Austria Kunstforum holds a collection of about 10,000 artworks from the early 20th century Art Nouveau to post-WWII avant-garde and contemporary art. Highlights of the place include a collection of historic photographers such as Alfred Stieglitz and Diane Arbus.

The Bank Austria Kunstforum is famous for its successful exhibitions attracting several thousands of visitors every year: currently on show, an exhibit dedicated to Martin Kippenberger, one of the most controversial artists of the 20th century. The focus of the show is to shed light on the impact of Kippenberger’s influence on the generations of artists that followed. 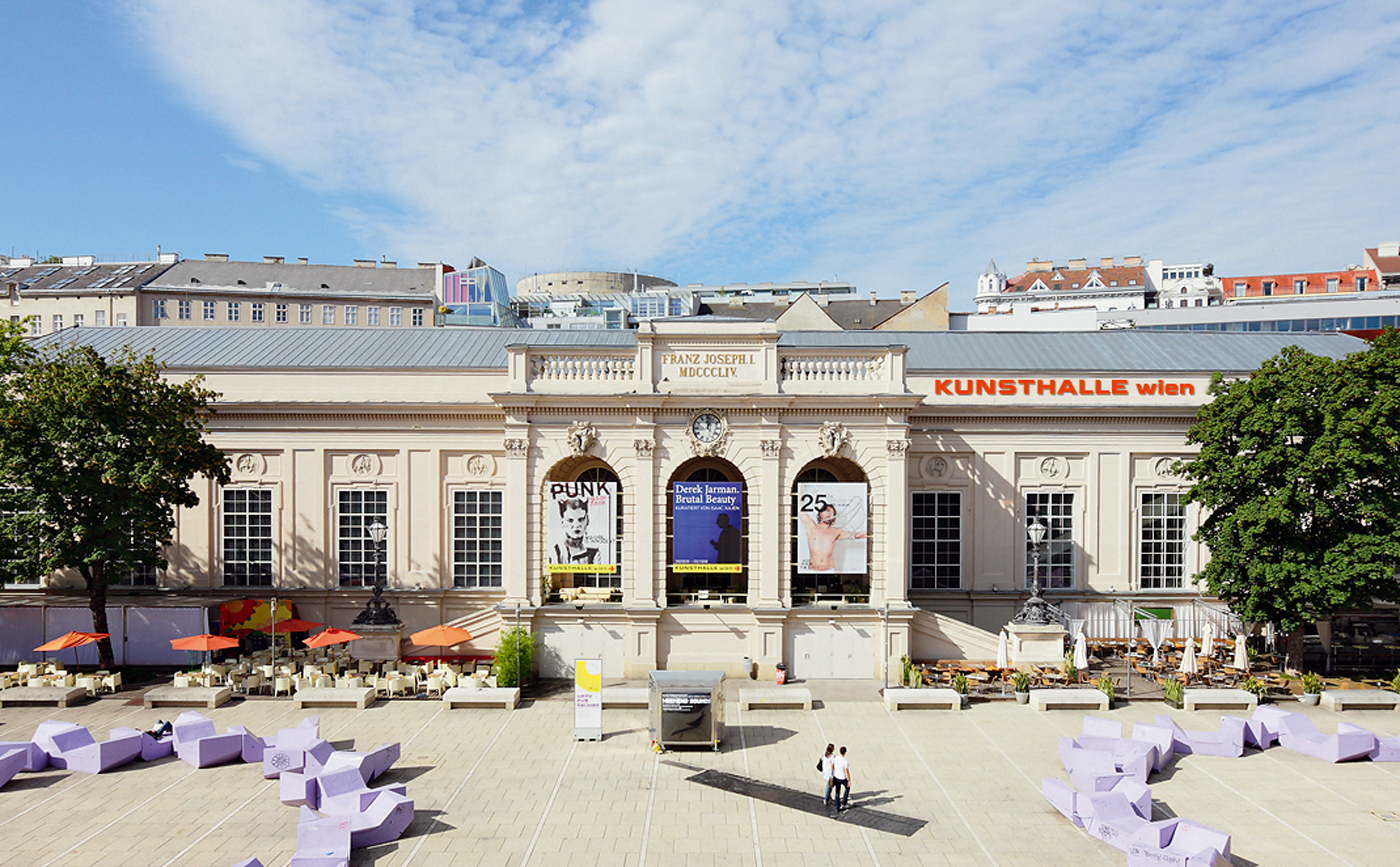 Open since 1992 and relocated in the museum district in 2001, the Kunsthalle Wien is one of the must-see places dedicated to contemporary art in Vienna.

With time, it acquired a solid reputation of being the most experimental place for contemporary art in town and its exhibition program distinguishes itself with innovative scenographies and is often centered on the main issues of our time

Currently, the Kunsthalle Wien is having a show entitled « Future Light: Pauline Boudry/Renate Lorenz. LOVING, REPEATING » for the Vienna Biennale: it is an immersive installation consisting of three videos and a series of sculptures where the past is recreated for a future use and for new desires to take shape. 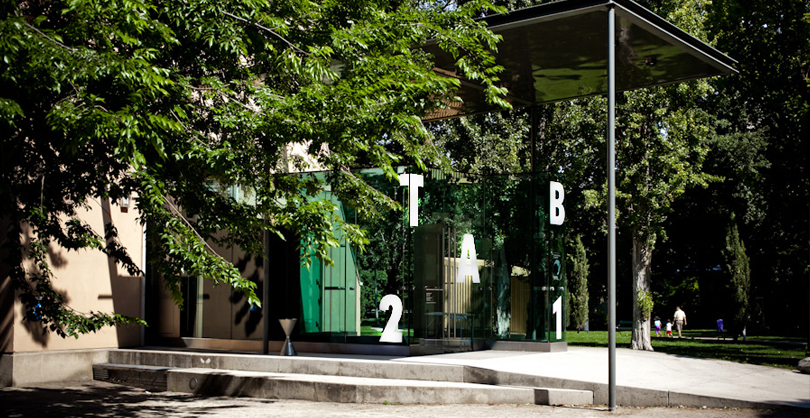 Founded in 2002 by Francesca von Habsburg, the TBA21 is laboratory dedicated to art, design and creation in general. The foundation’s ambition is to spread knowledge about experimental practices and artists with ambitious artistic projects that blur the lines between traditional artistic fields, whether it is in architecture, performance art or in site installations. The foundation is encouraging multidisciplinary artworks tackling social and environment issues.

The foundation is involved in many projects and commissioned artworks travelling to some of the most prominent art institutions in the world.

Up until September 27th, the foundation is presenting an exhibit about a project conceived by Olafur Eliasson in collaboration with architect David Adjaye for the 51th Venice Biennale and entitled “Your Black horizon Art Pavilion”. 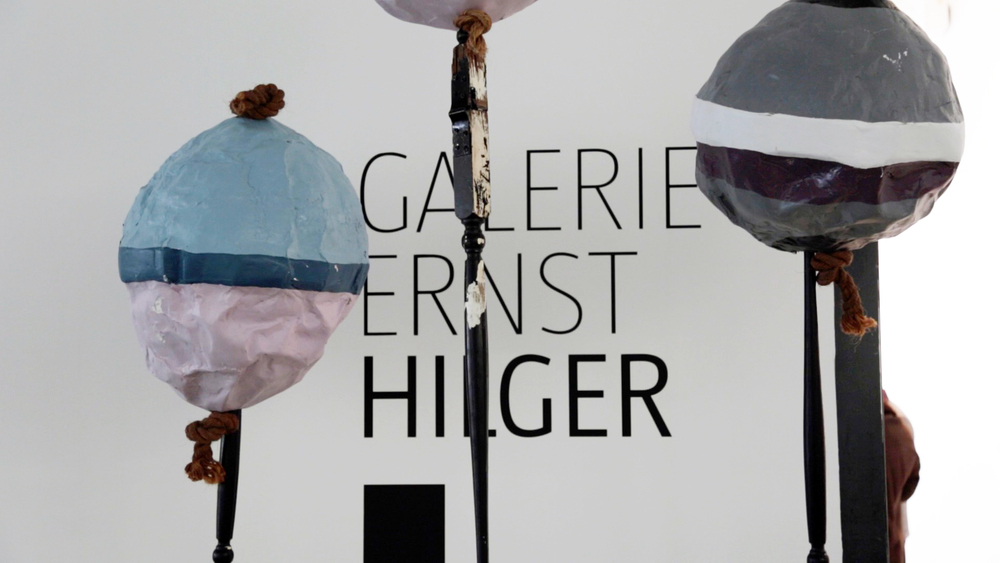 One of Artsper’s partners, the Ernst Hilger gallery was founded in 1971 and exhibits works by international artists like Pablo Picasso, Jean Dubuffet, Keith Haring and Mel Ramos as well as Austrian artists from the 60’s and after.

The 800 meter square space of the Ernsy Hilger gallery are a real laboratory for projects held by cutting edge artists from all over the world. 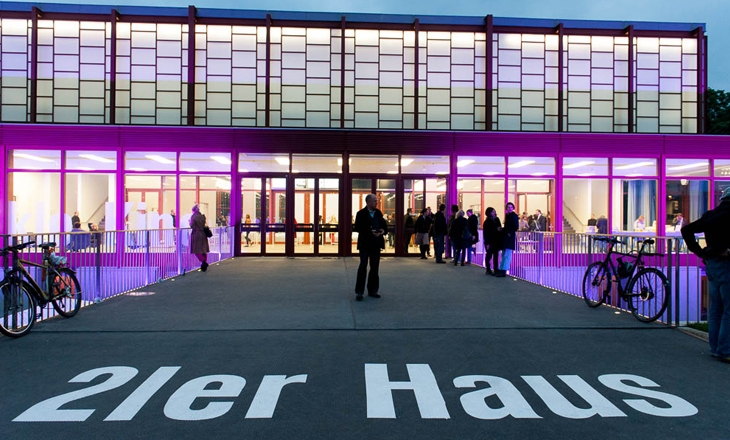 The 21ER HAUS museum is held inside a beautifully designed building by Karl Schwanzer, which received the Grand Prix d’Architecture in 1958. Remodeled in 2011 by Adolf Krischanitz, the 21ER HAUS specializes in Austrian art from the 20th and 21st century. Conceived for the World’s Fair of 1958, it became a museum of modern art in 1962. Today it is an international platform for Austrian art from 1945 up until today.

The 21ER HAUS collection’s highlights include the archives of the Austrian sculptor Fritz Wotruba and the Artothek des Bundes (the Federation of Austria).

Temporary exhibitions are organized all year long: currently on view, a show dedicated to Fritz Wotruba, considered one of the leading figures of Austrian sculpture of the 20th century. 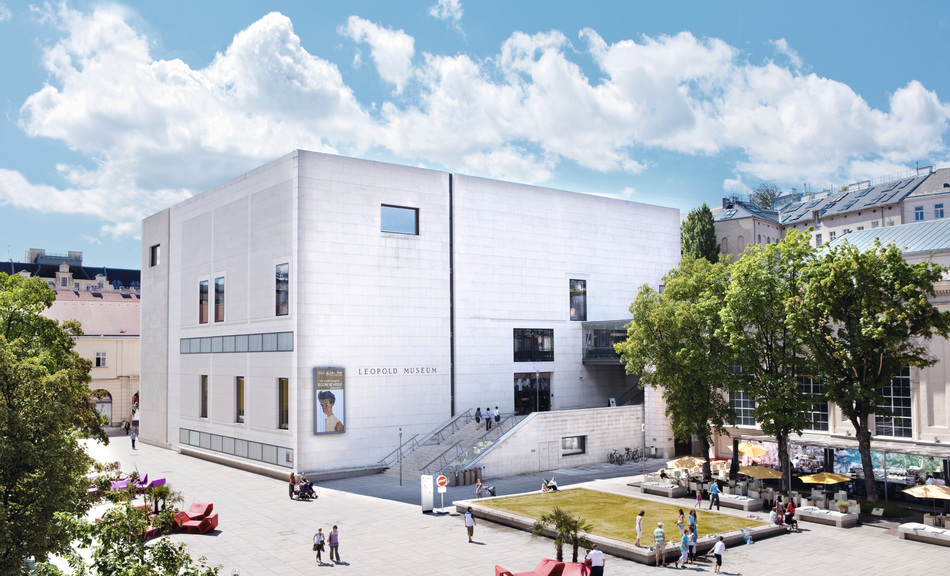 The Leopold Museum opened in 2001 and holds the private collection of Rudolf and Elisabeth Leopold, a collecting couple passionate about Egon Schiele. Their collection is home to the most comprehensive body of work by the Austrian artist Egon Schiele in the world, along with lithographs and decorative objects from the 19th and 20th century by famous artists from the Art Nouveau period and the Wiener Werkstätte movement.

This summer, an exhibition entitled “Where I want to go” (until September 14th) presents a dialogue between 80 works by British artist Tracey Emin and a selection of Egon Schiele’s drawings.