The days get longer, nice weather rolls around, weekends seem to stretch on, and even Parisians have a smile on their lips: ah yes, it must be May! The perfect time to leave town, travel, go swimming, get a tan, in short, to forget your worries and take it easy. Artsper recommends you pack your bags and click your way over to the French Riviera.

We’ve also put together a Top 10 list of Contemporary Art between Nice and Saint-Raphaël!

The works found at the Maeght Foundation project serenity in harmony with unreal surroundings that seem outside of time. The plain white walls of Malraux’s “Musée Imaginaire” give way to pine trees, cicadas, and warm breezes. At the foundation’s inauguration in 1964, Malraux declared: “This is not a museum (…) Here we attempt something that has never been attempted before: to create, instinctively and through love, a world in which modern art can achieve both its own place and the transcendent realm of ideas once known as the supernatural.”

Today, if this transcendent, supernatural world exists, it is in Saint-Paul de Vence… What other place on earth has streetlamps and door handles sculpted by Giacometti, mosaics by Braque, Miro and even Tal-Coat? Visitors pass through 20th-century art history to the rhythm of the fountains, terraces, and labyrinthine nooks and crannies in this one-of-a-kind village. 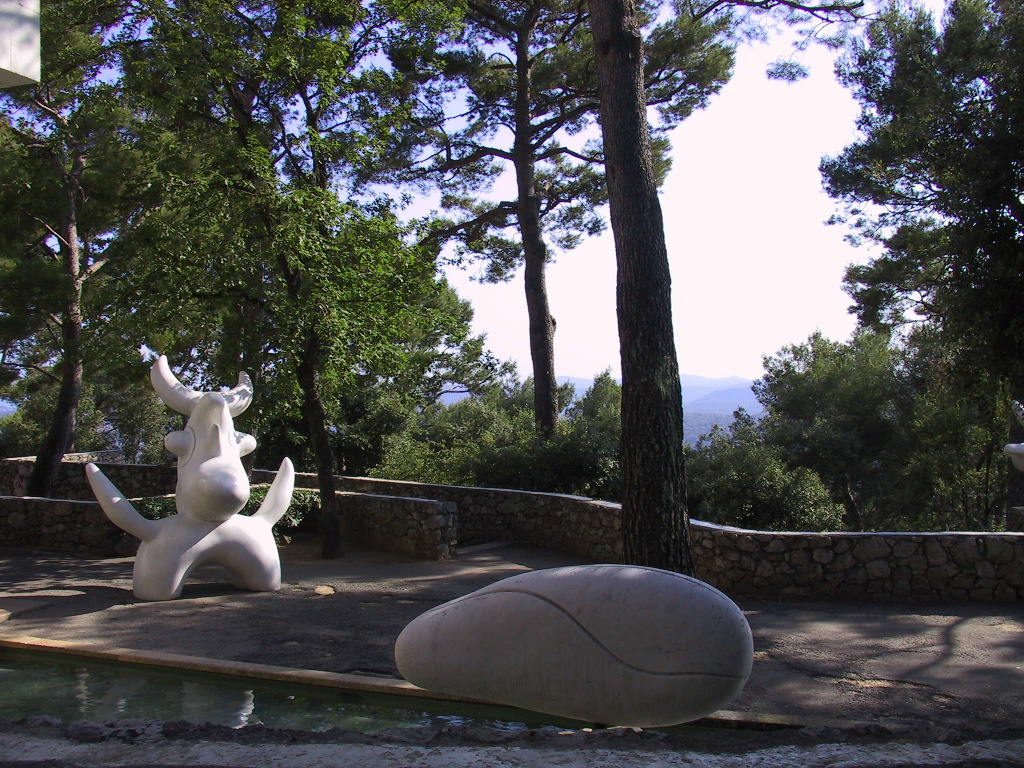 {The Jörg Immendorf exposition at the Maeght Foundation}

The Jörg Immendorf exposition, running from March 28th to June 14th 2015, is the highest expression of the wonder of the Maeght Foundation. The artist, whose work has been likened to that of the New Fauves movement that developed in Germany and Austria at the end of the 1980s, is intentionally provocative. His works denounce, expose, reveal, lay bare, and caricature the vices and follies of our society. By reclaiming a Greco-Roman and Classical artistic language, Jörg Immendorf plays with our cultural points of reference. In this surreal and unreal universe, the artist intermixes contemporary images.

Thus, in one of his paintings, one sees a skeleton, the archangel Gabriel, a monkey, and an American soldier. The painting has no title; it is up to the audience to interpret the symbolic language and find their own meaning in it. 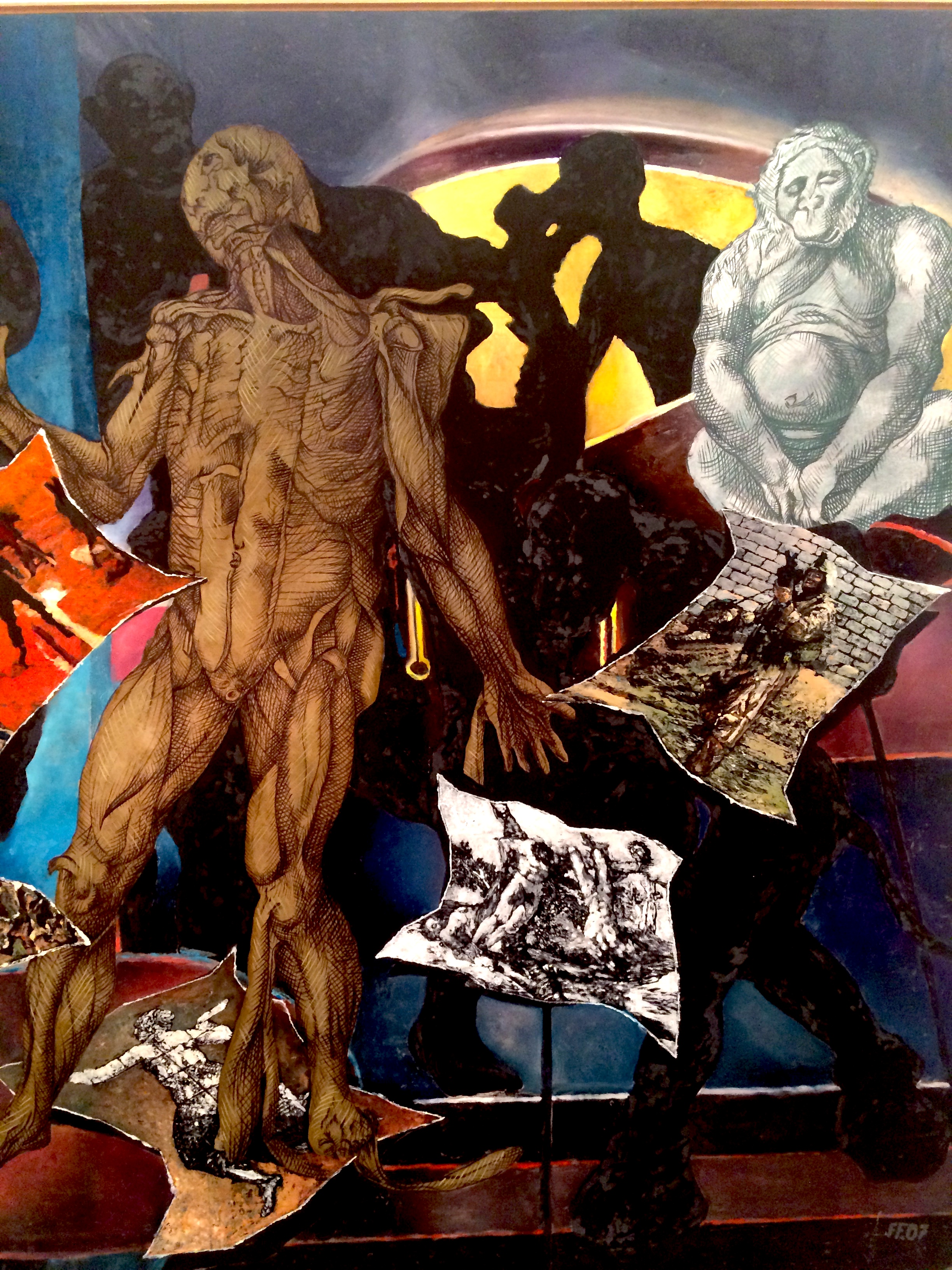 {The Musée Picasso in Antibes}

Inside Chateau Grimaldi, on the ruins of the Greek acropolis Antipolis, one finds the jewel of Antibes. No, it has nothing to do with the many trendy bars downtown, it’s all about the Musée Picasso. The museum bears witness to the past presence of two great artists: Pablo Picasso and Nicolas de Staël.

Pablo Picasso used the Chateau Grimaldi as a studio in 1946 and left 23 paintings and 44 drawings there. Among the least-known paintings: La Joie de vivre, Satyr, Fawn and Centaur with Trident, the Sea Urchin Eater,… In 1966, the Chateau Grimaldi officially became the Musée Picasso, the first museum dedicated to the artist.

As for Nicolas de Staël, he stayed in Antibes from September 1954 to March 1955. While working on an exposition at the Chateau Grimaldi, he committed suicide on March 16, 1955. His last painting, Le Concert, painted for the Musée Grimaldi, is his most monumental work (350 x 600cm)… And his last… It is displayed on the top floor of the Chateau Grimaldi and rouses incredible emotion in those who view it.

Since then, the Musée Picasso has received a number of donations of works of important artists of the 20th and 21st centuries: Arman, Ben, Calder, César, Combas, Ernst, Klein, Modigliani, Raynaud, Viallat… An undeniably essential place in the world of contemporary and modern art. 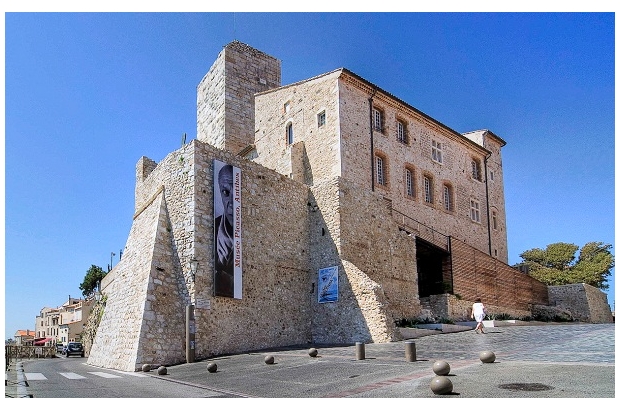 {The Musée Fernand Léger in Biot}

A sun-drenched day spent wandering through the Musée Fernand Léger is priceless. Covered in monumental mosaics inspired by the drawings Fernand Léger made for Hannover Stadium, the museum is surrounded by a majestic, beautiful garden. Inside, one finds the largest collection of works by Fernand Léger in a single place. A unique opportunity to (re-)discover this major 20th-century artist. 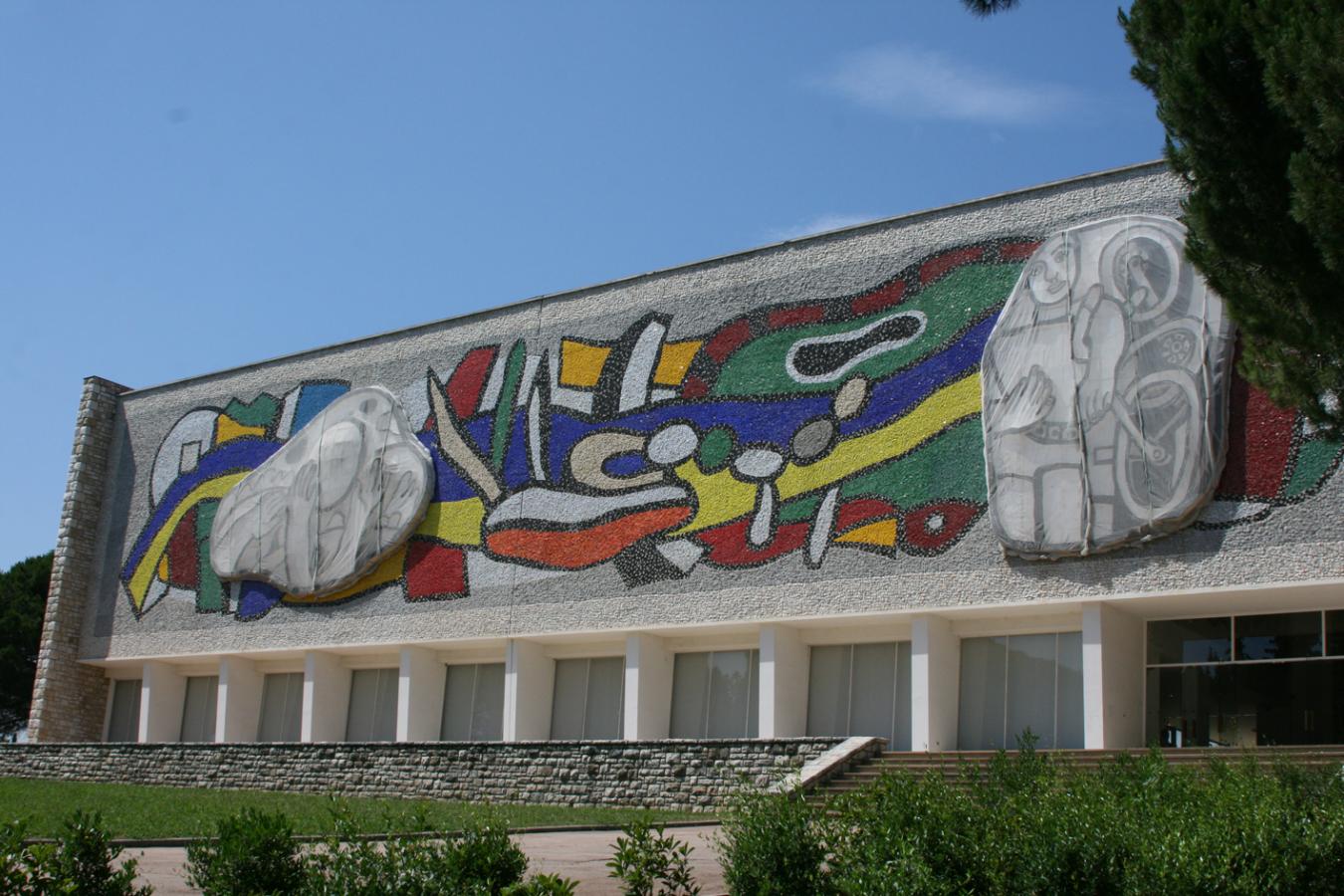 {The Musée Marc Chagall in Nice}

At the Musée Marc Chagall, located in the heart of Nice, Chagall’s works emanate a timeless tranquility. The museum is also know as the “national museum of the biblical message of Marc Chagall” because it houses his series of 17 paintings illustrating Genesis, Exodus, and the Song of Songs, painted by Chagall in 1966 and given to the state. One also finds many artworks related to the religious inspirations of the artist.

Let yourself be enraptured by his category-defying style, which can be reduced to neither surrealism nor neo-primitivism. 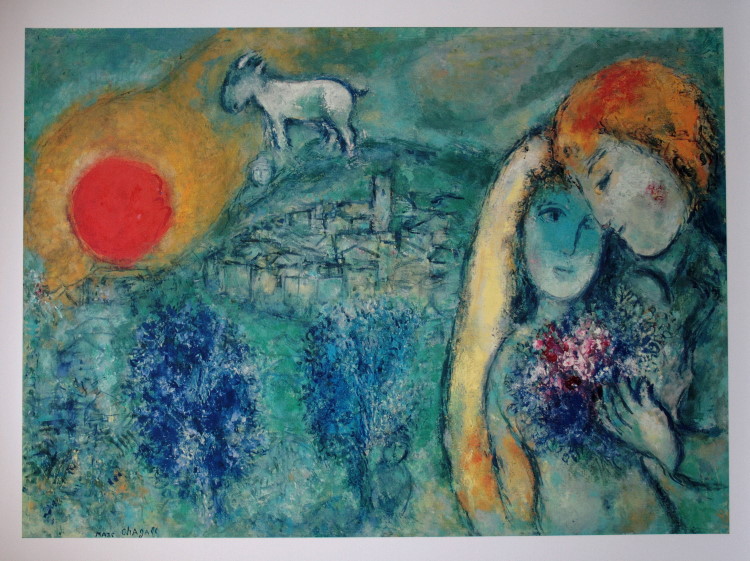 Matisse without the French Riviera is like a day without sun. Could we then say that the French Riviera without Matisse is like a kiss without a mustache? After having lived and worked in Nice from 1917 to 1954, Matisse and his heirs donated a large number of artworks to the state, with the aim of opening a Matisse museum.

Opened in 1963, the museum brought together 68 paintings and cut-out watercolors, 236 drawings, 218 engravings, 57 sculptures, and 14 books illustrated by Matisse, which joined 95 photographs and 187 objects that belonged to the painter as well as silkscreen prints, tapestries, ceramics, stained glass artworks, and other kinds of documents.

One of the largest Matisse collections was assembled in an old, 17th-century Genovese villa. Don’t miss it!

A few minutes by car from the Maeght Foundation is the village of Saint-Paul de Vence. Perched on a rocky overhang, the village, seemingly pulled from the set of a movie set in the middle ages, abounds with impressive artistic activity. There are nearly 20 galleries crowding together on the little main street of Saint-Paul de Vence. They present an interesting selection of artists (Andy Warhol, Jeff Koons, Yves Klien, Vivian Maier, etc.) for all the art lovers that have made the trip from the Maeght Foundation.

An essential detour in your Contemporary Art circuit through the French Riviera. 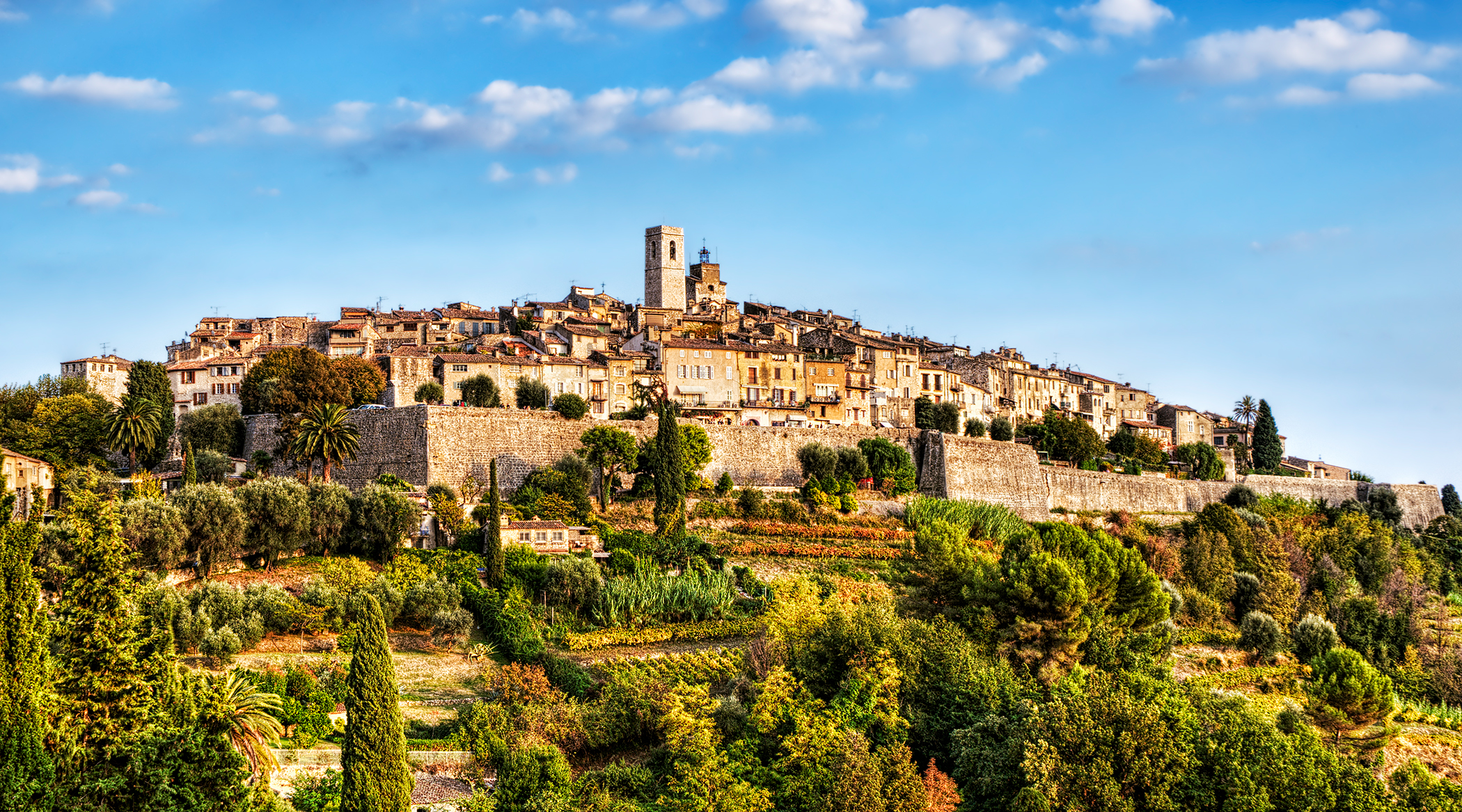 With circular and square shapes overlooking a view of water, the architecture of the Musée des Arts Asiatiques in Nice recalls the Louvre Abu Dhabi designed by Jean Nouvel. In this futuristic space, the Asian Art collections of the city of Nice have found a home.

Located right next to Nice Airport, it is a perfect place to quench your thirst for knowledge about Asia, and to take in temporary expositions showcasing the Asian contemporary art scene. 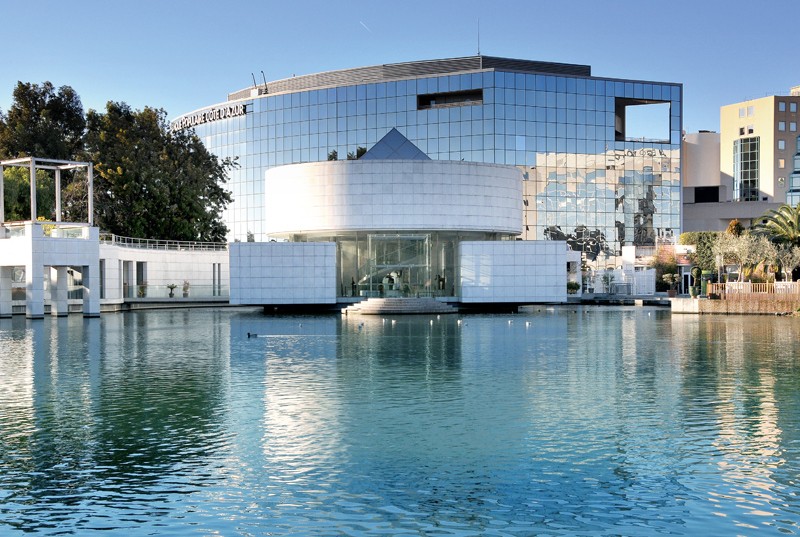 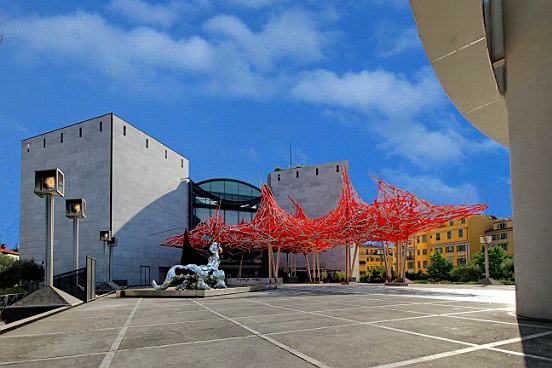 {The Partner Galleries of Artsper on the French Riviera}

Artsper also invites you to come see in person the expositions of our partner galleries in the south of France: The Galerie Gabel in Biot, the Galerie Casa d’Amor Design in Saint-Paul de Vence, the Galerie Depardieu and the Galerie Scholtes in Nice, the Art Life Gallery in Saint-Raphaël, and the Bazik Galerie in Cannes. 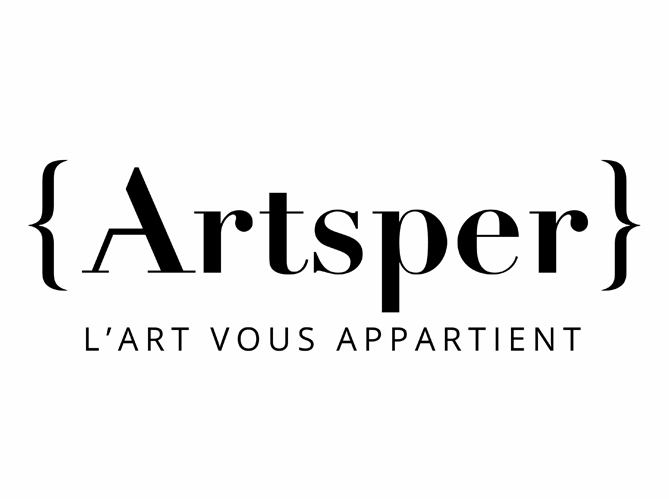