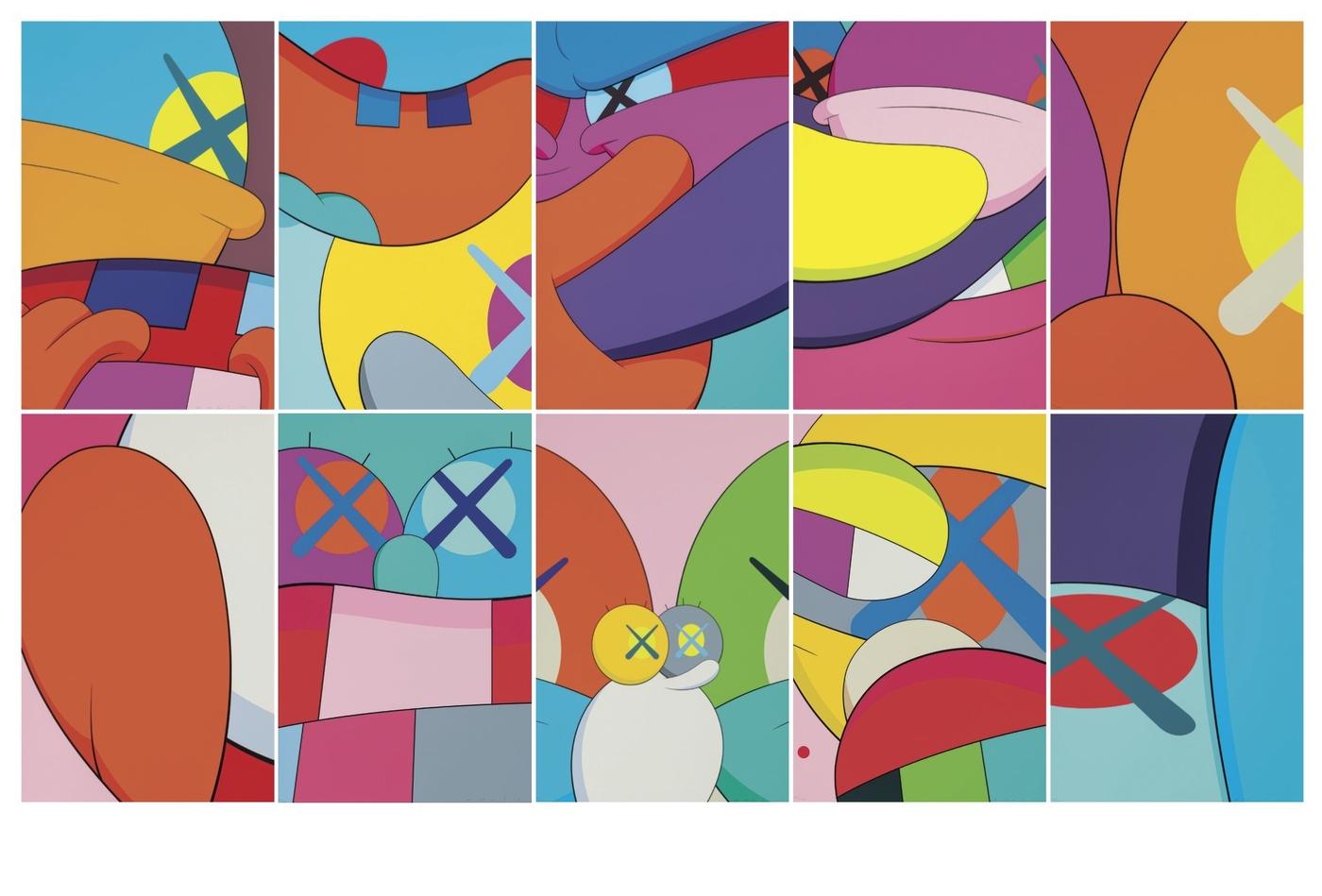 Kaws, if you know anything about the world of contemporary art, you’ve obviously heard that name before. This young New York artist, whose real name is Brian Donnely, is making his mark on the contemporary art scene thanks to these little characters straight out of cartoons.

Born in 1974 in Jersey City, he quickly became one of the street artists to know. A former graffiti artist and skateboarder, Kaws stands up for popular art that is accessible to all. The iconic figures of the world of cinema and television are his main sources of inspiration. Taken over, doctored and transformed, they become figurations of the consequences of today’s society. Kaws becomes a manufacturer of icons, in the direct lineage of pop art!

The artist is shaking up the art world by giving free rein to his creativity on different media. Real touch to everything, drawing, sculpture, painting, fashion, music and design. Discover 5 things to know about Kaws!

Since the 1990s, Kaws has been inspired by graffiti culture and skateboarding. The young Brian Donnely then roamed the streets of his town and hijacked the advertising campaigns. At first, he simply graffitied his name on posters, in large colourful K.A.W.S. letters. Then, a real style materialized with the appearance of his Skully icon: a pirate skull, whose bones protrude and form like ears, and crosses for the eyes. Major brands such as Dior, Calvin Klein, Chanel, or Diesel, which are now equipped with the Skully’s little head, are going to make the fruit of Kaws’ hijackings. The whole of New York is colored with the artist’s little monsters. Advertising posters selling beauty and wealth are topped with the artist’s skull, which allows him to reveal the falsity and illusion shown on these posters.

His gesture and his thought go further with the creation of the character Bendy. The skull is now elongated and curls like a snake between the limbs of the models. Here the notion of Eros and Thanatos are grouped together, where the death mask slips between the legs and neck of the models. The desire, the beauty, the richness tagged on a skull reminds us of Andy Warhol‘s famous Marilyn. This painter of the ‘70s had put on the famous American pin-up after his death. As for Kaws, he unveils death on a living being.

Traveling a lot these tags can be found in the four corners of the globe: Paris, London, Tokyo.

In fact, according to an urban legend, it was the famous street art artist Barry McGee who gave him the keys to open the billboards in New York!

Kaws’ universe is driven by pop culture. Numerous figures are taken up and diverted there. Spongebob, Hello Kitty, The Simpsons, Astro Boy, The Smurfs, and Mickey have been passed on at the stroke of a pencil – or a knife – by the artist.

After graduating from the School of Visual Arts in 1996, he was recruited by Disney. Kaws put his hand to work in the films of this giant of the film industry. He participated in the little known cartoon Doug and Doria, but more anecdotally, on the backdrop of the 101 Dalmatians! There, now you know that behind the little bicolored puppies, the background is signed Kaws! The collaboration with Disney has not been insignificant. Indeed, the reference to Mickey in his character companion is obvious. Apart from the pirate’s skull, the body with the rounded belly, the overalls with big curls, and the oversized gloved hands come from the famous Hollywood mouse.

These familiar characters who accompanied our childhoods are now almost foreigners. The images are easy to access but are disturbing. Kaws shares this pop culture, capable of being understood by all. So the message gets through faster, followed by emotions.

The relationship to consumer society is undeniable in Kaws’ works. There is a real integration of the everyday object becoming a work of art. It is precisely the hardly perceptible difference between art and reality (thus the everyday object) that makes his art so easily accessible.

Kaws is fascinated by Japanese art and culture in Tokyo. There he discovers Takashi Murakami, a visual artist, as well as Nigo, director of the Ape Bathing company.

From this collaboration and lulled by the world of Japanese plastic art, a series of package paintings develops. On 40×40 cm canvases, he uses animated icons from television, the Companion, the Chum, and others that he presents in real plastic packaging. These “vacuum-packed” works are like those presented in supermarkets.

Of this success, Kaws has gone further. The artist then turned to toy manufacturing with the company Medicom. His little characters that were only on paper now come to life in a 3D factory. By the hand of the artist, the figurines become small sculptures of art. They go from the warehouse to the gallery, from the shop to the museum.

With art toys mixed with pop art, Kaws takes over from Andy Warhol. From this Warholian heritage, Kaws has fun producing easy, simple, and everyday art that takes everything from today’s consumerism.

From this projection of everyday art, Kaws explores other artistic mediums. The Kawsian universe develops everywhere and can be seen everywhere. Once again, the New York artist creates a shop, a kind of Pop Shop, ironically named Original Fake.

The Chum, the Skully, the Companion, are declined ad infinitum having for only constraint the imagination of the artist. His characters and drawings can be found on T-shirts, sneakers, sweatshirts, scarves, mugs, posters, and even key rings and bath mats! Through merchandising, Kaws has found a way to integrate his art into everyday life, he mixes art directly with consumer goods, he is no longer just an artist, a creator of images but a creator of everyday objects.

From then on, many famous brands offered him collaborations, the same brands he had previously mocked! They literally became his raw material. Nike, Diesel, Marc Jacobs, Vans, Uniqlo, have once again adorned themselves with the famous skull, this time officially.
Fashion is not his only playground, Kaws is also getting closer to the world of music. In 2008, he designed the cover of the album 808s & Heartbreak by the famous rapper Kanye West!
Kaws is an artist who plays and has fun with his various collaborations. He humorously puts his mark and pirate skulls on everything he touches. Far from the traditional modes of operation, Kaws plays with talent with the new means at his disposal.

5. An artist experimenting in the age of time

In order to reconcile the confinement of different artistic structures, culture has turned to new technologies, in particular virtual reality.

Understanding the importance of the phenomenon of this new digital art era, Kaws took up the torch. During the confinement, the New York artist created the first virtual exhibition! With the partnership of Acute Art, Kaws released an application called EXPANDED HOLIDAYS. From March 12th to 26th an exhibition of Kaws’ work was held on your phone! Virtual reality (VR) and augmented reality (AR) allowed users to find the famous Companion in 12 specific locations around the globe. The Pyramid of the Louvre in Paris, Times Square in New York, the Millennium Bridge in London, the Wheel Observatory in Hong Kong, or the Ibirapuera Park in Sao Paulo, all found themselves animated by a small Companion. The character floated in the air accompanying these iconic places.

Afterward, 25 sculptures could also be purchased for $10,000 each. This allowed collectors to travel with their work and dispose of it as they saw fit. A rental service was also available with packages limited to several days starting at $6.99 per day.

Kaws has thus brought a new mode of exhibition and art market. Today, Kaws is no longer a young street art talent, but a confirmed artist who experiments and innovates successfully.

An artist to watch closely

Moreover, in wanting to become part of everyday life, Kaws’ art has gone beyond traditional media and has become directly installed on our clothes. Through the merchandising of its 3D creatures and figurines, Kawsa blurs the line between artwork and consumer goods. It goes beyond its role as a witness to consumerism to become an active agent of it.

Kaws is a true forerunner and a leading figure of artists at ease with their time. Bathed in street art and pop culture, he offers an art that is unambiguous and goes straight to the point. Although graffiti only marked a short period in his youth as an artist, this mode of expression had a significant impact on his art. His characteristic little characters have since evolved, but they still find their inspiration among the icons of modern society.

A beacon on the art scene, Kaws is a world-renowned artist. Exhibitions, events and sales around his work attract an ever-growing audience. A colossal retrospective exhibition was held in Melbourne in 2020 at the National Gallery Victoria, and the Brooklyn Museum is already planning another one for 2021. You haven’t heard the last of Kaws…