From July 4 to November 29, 2020, the Giacometti Institute‘s temporary exhibition is focusing on the emblematic work of Alberto Giacometti: The Walking Man. Both intriguing and mysterious, it synthesizes the artist’s research on representing the essence of human beings. Giacometti’s work should not be reduced to a single famed sculpture; this multi-talented artist, as much tortured as he was a perfectionist, bequeathed a considerable artistic legacy. As a definitive mark in 20th-century art, Artsper invites you to discover this fascinating artist of modern art.

1. He was immersed in art since birth.

Born in Switzerland in 1901, he grew up in the studio of his father, Giovanni Giacometti. This post-impressionist painter of some renown introduced his son to painting and pushed him to develop his artistic sensitivity. It is thus quite naturally that at the end of his schooling in 1919, the young Giacometti enrolled at the School of Fine Arts and then at the School of Arts and Crafts in Geneva, in the sculpture class. He would later confess: “I chose sculpture because it was the field I understood the least”.

After a trip to Italy between 1920 and 1921, he set down his suitcases in 1922 in Paris, capital of the arts, in the avant-garde district of Montparnasse. He then entered the Académie de la Grande Chaumière to follow the teaching of Antoine Bourdelle’s sculpture.

2. He stayed in the same studio all his life.

In 1926, he moved to 46 rue Hippolyte-Maindron. Until the end of his days, it is in this small studio of only 24m² that he produces his most famous works. In spite of the success and the fortune that accompanies it, he never abandoned this space, however, dilapidated and reduced. It is only within the walls of this eminently personal place that he could create. More than a studio, he lived there, sometimes only going to bed there at 3am, caught up in a creative frenzy.

Today, his “studio cave” has been faithfully reconstructed at the Giacometti Institute from photographs of the time. Mattresses, drawings on the walls, notes, sculptures and even cigarette butts, preserved by his wife and scattered throughout the place, allow one to immerse oneself in the heart of the artist’s creative process.

3. He had a brief encounter with the surrealists.

In the early 1930s, Alberto Giacometti joined the group of the Surrealists. The dreamlike and metaphorical treatment of his subjects and the mystery that emerges from them is a constant in his works. The Boule Suspenduel, created between 1930 and 1931, is his “first object with symbolic functioning” and is representative of it. Exhibited at the Galerie Pierre, this work enthused André Breton who introduced the artist to his circle of friends. Several versions will be produced, the last one being the one made for his retrospective at the Tate Gallery in 1965.

Giacometti is one of the few sculptors of the movement and he participates in several group exhibitions. He also produced illustrations for the books of the group’s intellectuals. He even took up the pen to write a few articles for their journals.

However, in 1935, he was excluded by Breton. Indeed, Giacometti himself admits having joined the Surrealists more for their political opinions. He seceded through his research on the representation of the human head and his work after nature, leading him to produce figurative works of a too great realism for the group.

4. Observing the deceased influenced his work.

Alberto Giacometti twice was at the bedsides of people who had just died, first in 1921 and then in 1946. These two near-death experiences profoundly marked his artistic research. Taken from visions of heads floating in the air, the result is an unfailing quest for the representation of this part of the body. According to him, its mystery lies in the eyes, seat of life.

With the first dying person, he keeps in memory the nose which seems to lengthen while life expires. This proximity with corpses also seems to explain the terror and the certain morbidity emanating from his sculptures of standing skeletal characters. If Giacometti has always refused to represent the survivors of the concentration camps after the Second World War, he testifies that he wanted to give an account of humanity that seemed particularly fragile to him. Ultimately, it is the human condition in all his philosophical reflection that he portrays.

5. His first Walking Man is actually a Walking Woman.

The first prototype of his iconic work would date from 1932. However, it is a woman who is walking. The model would find its source of inspiration in an ancient figure, Gradiva. In Wilhelm Jensen’s novel, an archaeologist is marveled by a woman walking, engraved on a bas-relief.

If the movement of the walking woman sculpted by Giacometti is almost not perceptible, its resemblance to the sculptures of Ancient Egypt, which the artist admires greatly, is undeniable. Hieratic on its base, without arms or head, it gives the impression of being an archaeological object just out of the ground. Thus, it embodies the universal human figure.

6. An eternally unsatisfied perfectionist, many of his works remain unfinished.

Highly critical of himself, Alberto Giacometti sought to give an account of the lives of his models, to capture the fleeting movement of his walking characters. Very prolific, he actually found in failure a form of salvation, admitting “The more you fail, the more you succeed“. He could thus sometimes destroy a work in progress in order to start it over.

His quest for perfection was captured in Stanley Tucci’s film Final Portrait. He recounts the circumstances surrounding the creation of the portrait of James Lord. While a single afternoon of posing was initially planned, several days of work were finally necessary for the artist.

The project for the Chase Manhattan Bank skyscraper is also indicative of his quest for the ideal. In 1959, the artist was invited to submit a proposal for a monumental installation to decorate the esplanade of the building. He decided to create a dialogue between three sculptures: a standing woman, a walking man, and a monumental head. However, as he had never been to New York, the question of the scale of the statues in relation to the immensity of the buildings disturbed him. After the realization of the bronze models, unsatisfied with the result, he gave up the commission. Like many of his other creations, the work will never be completed.

7. Not only a sculptor, but he also excels in painting and drawing as well.

Before starting the practice of sculpture, Alberto Giacometti was introduced to drawing at a very young age by his father. Thus, he was only about ten years old when he produced his first paintings. His first oil painting, Still life with apples, would thus date from 1915.

Throughout his career, Giacometti produced many portraits. Working from memory, he prefers to paint from a model, asking his wife, Annette, and his brother, Diego, to pose on numerous occasions.

At the end of the 1940s, he diversified his techniques. In particular, he uses the ballpoint pen as soon as it is marketed! With this modern, inexpensive and practical tool, he drew on any medium he could find: book margins, newspapers, embossed paper tablecloths from breweries…

In addition, from childhood, he made his first prints alongside his father. Beginning with woodcutting, he initiated himself to intaglio engraving in the 1930s, especially to illustrate surrealist works. Then, in 1946, he tried etching before devoting himself to lithography in 1949. While his works reached very high prices at the end of his life, printmaking became a means of widely disseminating his creations.

8. He dedicated himself to the Decorative Arts.

As a true designer, Alberto Giacometti began producing decorative objects in 1929. That year, he obtained a first order to furnish the office of banker Pierre David-Weill. Subsequently, in the 1930s, he collaborated on several times with the avant-garde decorator Jean-Michel Frank. In this context, he created many objects to decorate the interiors of the Parisian and international elite, such as the New York apartment of Governor Nelson Rockefeller or the villa of the Argentinean couple Jorge and Matilde Born. His lamps and floor lamps, wall lights and other vases or bas-reliefs are highly appreciated. These “utilitarian objects” as he calls them, are almost sculptures. They often refer to ancient and extra-European arts, especially African and Egyptian. He manages, however, to bring them up to date in the art deco style, with refined and simplified forms.

9. Prostitutes are often his muses.

As soon as he arrived in Paris, he assiduously frequented the brothels of the Montparnasse and Barbès districts. Fascinated by prostitutes, their “strange, long, thin and slender legs” may have inspired his long and filiform post-war statuettes.

A defender of brothels, he contested their closure with a column entitled “The Dream, the Sphinx and the Death of T.” published in 1946 in the magazine Labyrinthe. He also dedicated several paintings to this world of night. The two paintings Au Sphinx (1950), representing naked women in the mythical brothel is thus a tribute to the place that has just been closed.

In 1960, he met the young prostitute Caroline. Real obsession, she poses for him many times. Each of her representations is then the opportunity to represent the different facets of his personality.

10. He was recognized as one of the greatest artists of the 20th-century during his lifetime

In the post-war years, Alberto Giacometti’s international and institutional recognition was consolidated. In 1950, the Kunsthalle in Basel organized his first retrospective exhibition, while the Kunstmuseum acquired his work The Square, becoming the first to enter a public collection. While other retrospectives followed in various European and American museums, the artist represented France at the Venice Biennale in 1956 with his Women of Venice series. At the end of his life, he received numerous awards: the Carnegie Prize in 1961, the Grand Prize for Sculpture at the Venice Biennale in 1962, the Guggenheim Prize in 1964, and finally the Grand Prix International des Arts awarded by France in 1965. At the same time, in 1962, a first monograph listing all of his work to date was dedicated to him.

In 1966, he died of cancer at the height of his fame. Passed on to posterity, his sculpture Man Pointing (1947) is his work sold for the highest price to date, reaching $141.2 million at auction at Christie’s in 2015. It is considered a national emblem for Switzerland. In 1998, Switzerland chose to put Giacometti’s portrait on one side of the 100-franc bill and the Man Walking on the other.

His wife, who died in 1993, created the Alberto and Annette Giacometti Foundation in her will. Holder of part of her copyright and owner of the largest collection of her creations in the world, she was recognized as being of public utility in 2003. In charge of authenticating the works and disseminating them to the public, the Foundation opened the Giacometti Institute in 2018, a research and exhibition space. There, he will be able to interact with the creations of contemporary artists, revealing an art that is as original as it is universal, modern as it is timeless! 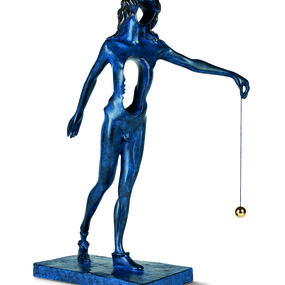 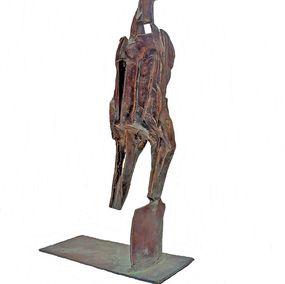 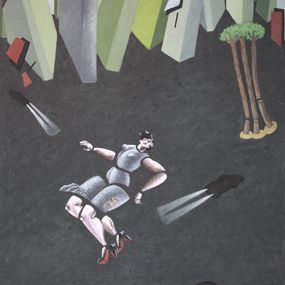 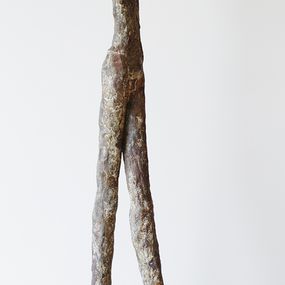