New Amsterdam was her name, before she was New York. With hundreds of museums, the city is a true center of modern and contemporary art, and an essential destination for art lovers. It’s impossible never to have seen a photograph of Manhattan… But beyond the walls and museum settings, you may find a masterpiece at the corner of a street. The streets of New York are full of curiosities, whether they are the result of a coincidence or an assiduous quest, they will surprise you.

Join us today through the streets of New York and discover the hidden part of the city, it may surprise you.

An acoustic installation in Times Square

If you ever pass through Broadway, listen carefully. Between the 45th and the 46th Avenue you will notice a slight change of atmosphere in the middle of the crowd. In 1977, the artist and musician Max Neuhaus installed an acoustic chamber under the subway gates. A continuous and discreet sound is diffused and slightly embellishes the atmosphere. Neuhaus’s goal was to create a work outside the museums and for everyone, but more importantly, one that could discreetly disturb the daily life of the New Yorkers and stimulate the curiosity of the pedestrians. A work of art that does not impose itself frontally on the site or on pedestrians.

If you’re a street art enthusiast, we have the perfect solution for you ! Located in Brooklyn, Bushwick is almost the world capital of graffiti paintings. Between signatures, mosaics, collages, stencils and even advertisements, the district is full of diverse and suprising works. Come and meet artists who will be happy to talk to you about their work. And if you are a graffiti artist yourself and want to leave your personal touch to Bushwick, don’t hesitate to contact one of the many groups of artists in the area.

If you’re travelling through Manhattan’s Midtown, don’t miss Robert Indiana‘s mythical sculptures. For LOVE, a visual designed in 1965, the artist’s goal was to create a symbol for a popular art, to spread love and hope, but also to spread an anti-militarist message. Concerning HOPE, the design was made for Barack Obama’s presidential campaign in 2008. Unfortunately the LOVE sculpture has recently been removed for restoration. We will have to settle for HOPE in the meantime, hoping that it will come back soon.

Did you know that in the Soho district there’s a Picasso sculpture ? Even though Picasso never set foot in the United States. In the late 1960s, architect I.M. Pei and his company developed the “Silvers Towers” for the university campus of Bleecker Street. And then I.M. Pei had a brilliant idea to decorate the concrete towers, he decided to add a work of Picasso. This bust is based on the “concrete engraving” method developed by the Norwegian artist Nesjar and is inspired by Sylvette David, the famous girl with a ponytail painted in 1954. I.M. Pei then acquired it and installed it in the park in the centre of the towers.

When it comes to New York we have to mention Keith Haring. A major figure on the New York underground scene, Keith Haring was also very involved in the social and humanitarian sphere. It was in 1986 that the artist decided to paqint, without authorization on a handball course. The painting is inspired by the crisis then experienced by New York City, invaded by cocaine and in the grip of delinquency and violence. Very quickly this work will be placed under the protection of the city of New York and even restored in 2007.

This sculpture was commissioned by businessman David Rockefeller in 1969 to the french artist Jean Dubuffet. It was inaugurated on October 24, 1972. Designed to decorate the entrance to the Chase Manhattan Bank, this 14 meter high sculpture is made of epoxy resin and painted with polyurethanes. Jean Dubuffet is a leading artist of the so-called “art brut” movement, an art full of tenderness, innocence, but also clumsiness. Part of his “Hourloupe” series, Dubuffet’s sculpture brings a touch of his innocence to the relentless world of New York finance.

Born in 1975 in a poor district of São Paulo, the street artist Eduardo Kobra is an autodidact. He is engaged in many causes such as environmental protection and the end of bullfighting. The artist’s style has evolved from black and white to an explosion of colours and shapes, but always in a very realistic style. More than 500 of his works can be found in major cities of 17 countries. And if you are in New York, you may find one of the 18 paintings that decorates the city’s walls.

While passing by Soho, pay attention to your feet!  Indeed, you will not miss anything because this gigantic work by Françoise Schein (more than 27 meters by 3) covers the sidewalk of Greene Street. Created in 1985, it reproduces the map of the Manhattan subway as it was at the time, using steel bars and LED bulbs. For the artist, the New York metro is like “a permanent flow inside a living organism”. She also considers this work as the starting point for her work on human rights, as the metro is “the most democratic place in all cities”. 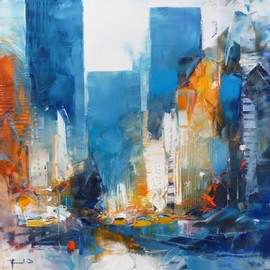 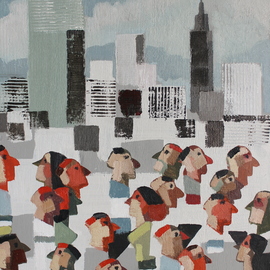 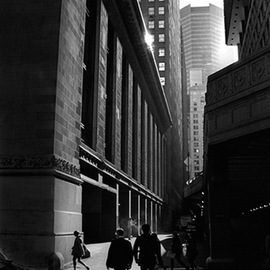 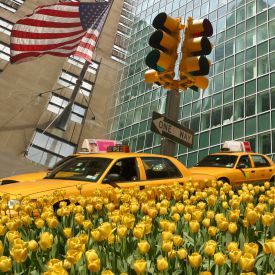