You’ve probably comme across one of his giant murals. Whether in Spain, France, Portugal or Switzerland, Okuda always leaves behind a trace, which is generally colorful and colossal. His large murals with both a pop art and surrealist edge are not just dramatic, they have a message too. They invite viewers to think about the illusion of capitalism, which according to him cannot be a real source of freedom.

This Spanish street artist is, in our opinion, one you should keep an eye on.

This piece was created in order to turn this church into a haven for skaters and art lovers. Making sure to retain the spirituality of the temple, Okuda introduced bright colors and cool motifs as always in order to turn the space into somewhere that people really want to be!

Okuda is influenced by the artist Alejandro Jodorowsky, but also by film directors such as Michel Gondry, Leos Carax or Terry Gilliam. And clearly also Leonardo Da Vinci in this particular work! The Mona Lisa‘s connection to Paris is what made him choose to paint the his interpretation of it here, of course.

Okuda created this work in the Swiss Alps as part of a street art festival. He decorated this ski lift station with his characteristic geometric shapes. It matches perfectly with the blue sky, don’t you think?

One of the most spectacular murals that this artist has ever made, Rainbow Thief is another piece which Okuda created as part of a street art festival. This time, it was the HK Walls festival that he participated in. This work is so spectacular that it has in fact attracted tourists to the district that it’s in, the Sham Shui Po district.

5. 11 Mirages to the Freedom, Morocco

Okuda has painted another church, this time in Morocco. This took several days to complete, and it features animals, portraits and the bright and happy colors which are always part of his works.

6. Skull in the Mirror, France

This abandoned castle near Paris was transformed on the inside and out by artists as part of a festival, but of course it was up to Okuda to decorate the grandest part. Despite the skull motifs which are featured in this piece, it remains cheerful in the way that Okuda has mastered.

On the far left, you can see La Bella Di Bellini, the work which Okuda contributed to the Emergence Festival in Sicily, Italy in 2015. Alongside other artists, he has certainly brightened up this area!

An imaginative way of encouraging artists to display their art, TruckArtProject is a moving gallery of the artworks that get painted on the vehicles. Okuda is not used to working with a horizontal canvas, as the vertical sides of buildings are what he usually uses. But he faced up to this challenge very well it seems!

When you can decipher the iconography of Okuda’s richly symbolic works, you can understand the ideas that underline them. You’ll often find elements such as bricks, trees, multicolored blood, the sky, birds, cages, men with no identity, animals without head, stars, the universe … Works like this invite the public to reflect on the human condition. In particular, our attitude to nature.

Let’s finish off with one of Okuda’s sweetest pieces, this artwork which patterns the walls of a kindergarden in Italy. The children who attend this kindergarden have recreated their own versions of the artworks which now decorate their kindergarden – too cute!

Okuda seems to always be working on projects, and is becoming more and more important in the street art scene. Through his studio work, he has even collaborated with a number of brands including Adidas, Puma and Ralph Lauren. Keep an eye out for Okuda’s artworks near you! 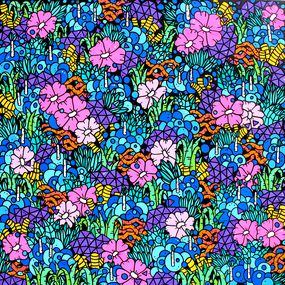 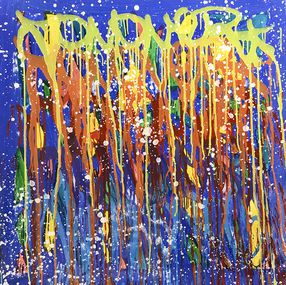 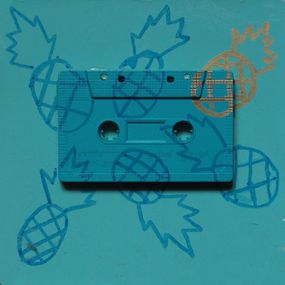 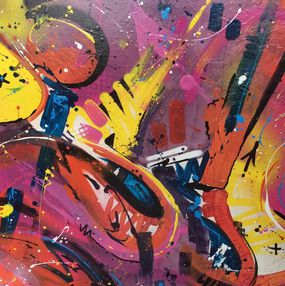