François Mitterrand’s birthday gifts, a bicycle for divorcing couples, the smallest atlas in the world… The artists’ books do not know the syndrome of the blank page! Humor, craziness and oneirism go hand in hand in these objects full of an unshakeable charm. A complete work of art, the artist book combines artistic beauty with fields of ideas. Born in the 60s, this object is an expression of conceptual art. Even if it draws its source from the 18th Century from poet William Blake.

The alchemy of paper and images inspired the avant-garde artists, whose main purpose was the democratization of art. Alternatives of the art market, these ten-works selected by Artsper can slip in your backpack. 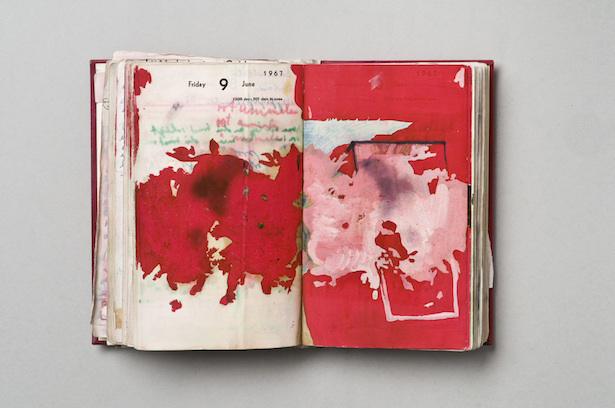 Dieter Roth, a German Swiss, is the forerunner of the modern artists’ book in Europe and completely avant-garde. He is a famous draftsman, painter, poet, sculptor and musician. He is a real character, and likes playing preposterous experiments: such as painting with chocolate or with both hands at the same time, changing his name when he goes to another country, transforming a kitchen into a work of art and he excels in poetry. With lyrical optic games and mesmerizing graphics, Dieter Roth transforms a book in an aesthetic opus. The sensible shapes composed by Dieter Roth are born in the pages, through the reaction and the imagination of the reader.

A two-meters long poem-drawing-accordion was the first simultaneous book. When the prose of Blaise Cendras combines with the graphic design of Sonia Delaunay, a new aesthetic experience is born. The poem tells about the journey of a young man in the trans-Siberian railway going from Moscow to Kharbin. Blaise Cendras met Sonia Delaunay through Guillaume Apollinaire, and became friends with her thanks to their common love for Russian language and aesthetics. The painter composes defined shades based on the law of simultaneous contrasts while the poet writes about the dreams of his reverie in ink. 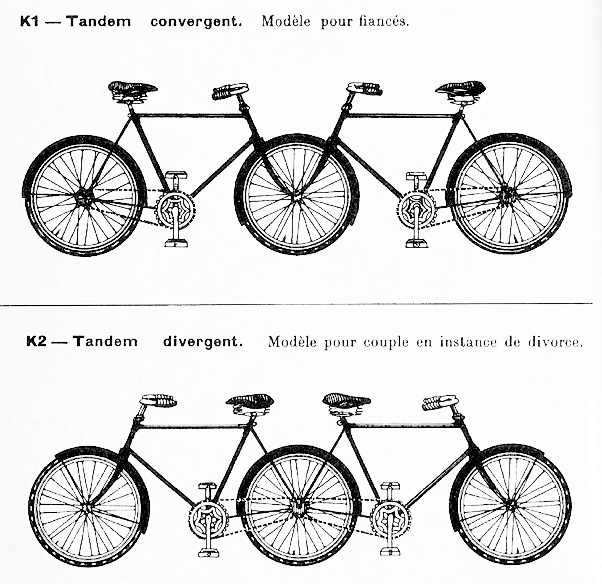 Eccentric objects abound in the Catalogue of Impossible Objects: a fake nose faucet during the carnival period, an umbrella gutter to evacuate water from our legs, a tennis basket (an object that combines the two sports), a pipe to smoke two different sorts of tabaccos, a harmonium bicycle for musicians… Jacques Carelman was a French painter, decorator and illustrator who became famous for his poster of May 68 representing a CRS holding a baton. The humorful character of his objects is accompanied by a small description worthy of a Vaudeville. Jacques Carelman offers us a parody of a sale catalogue, with abundant bursts of laughter as a bonus. 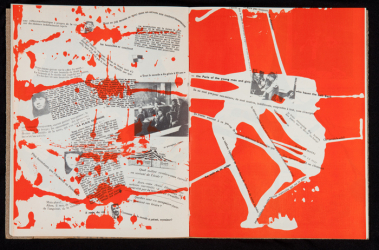 Fin de Copenhague is the result of a twelve-year collaboration between Guy Debord, author of the famous book “La Société de Spectacle” and Asger Jorn, a Danish experimental painter. Published by Bauhaus Imanigiste, the book is part of the effervescence of the MIBI (International Bauhaus Imaginist Movement, a European avant-garde group founded in 1954) and explains the general theory of diversion.

These two figures of the situationist group refuse the living conditions established by the state and the merchandise. Dissenting artists, the painter sprays the pages with a stream of colors, stains and marks… While the writer, with a pen on his hand, splashes the established order. 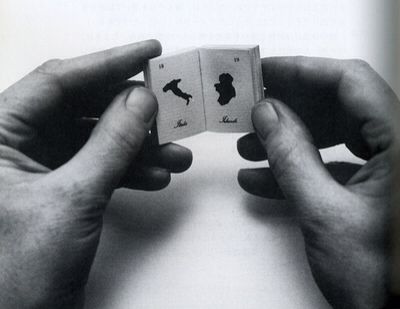 Marcel Broodthaers created “the smallest atlas in the world” measuring 50.5 x 69.5 cm, extracted from the edition “La Conquete de l’Espace” an Atlas for the usage of artists and military. The author of this opus, a Belgian conceptual artist, surreal painter, poet, photo reporter and bookseller, oscillates between a surrealist and Dadaist style. He condenses his several influences in this Atlas to illustrate 32 maps of different countries in different scales. The reader turns the pages and performs a disconcerting tour of the world full of mystery. The encrypted alphabet is reminiscent of Mallarme and Magritte, the two muses of Marcel Broodthaers.

“My books have been firebrands… I adored and still adore the idea that they disorient…I really believe that my books have been very radical, maybe the most radical thing that I have done… I gladly take them for a dominant aspect of the history of art now” (catalog Center Georges Pompidou 1989

Following the same path of Walker Evans, Ed Ruscha’s photographic practice has a documentary and conceptual style. Between Los Angeles and Oklahoma, the photographer captured the vernacular architectures of the United States. 25 meters of panoramic views unwind a photographic accordion. 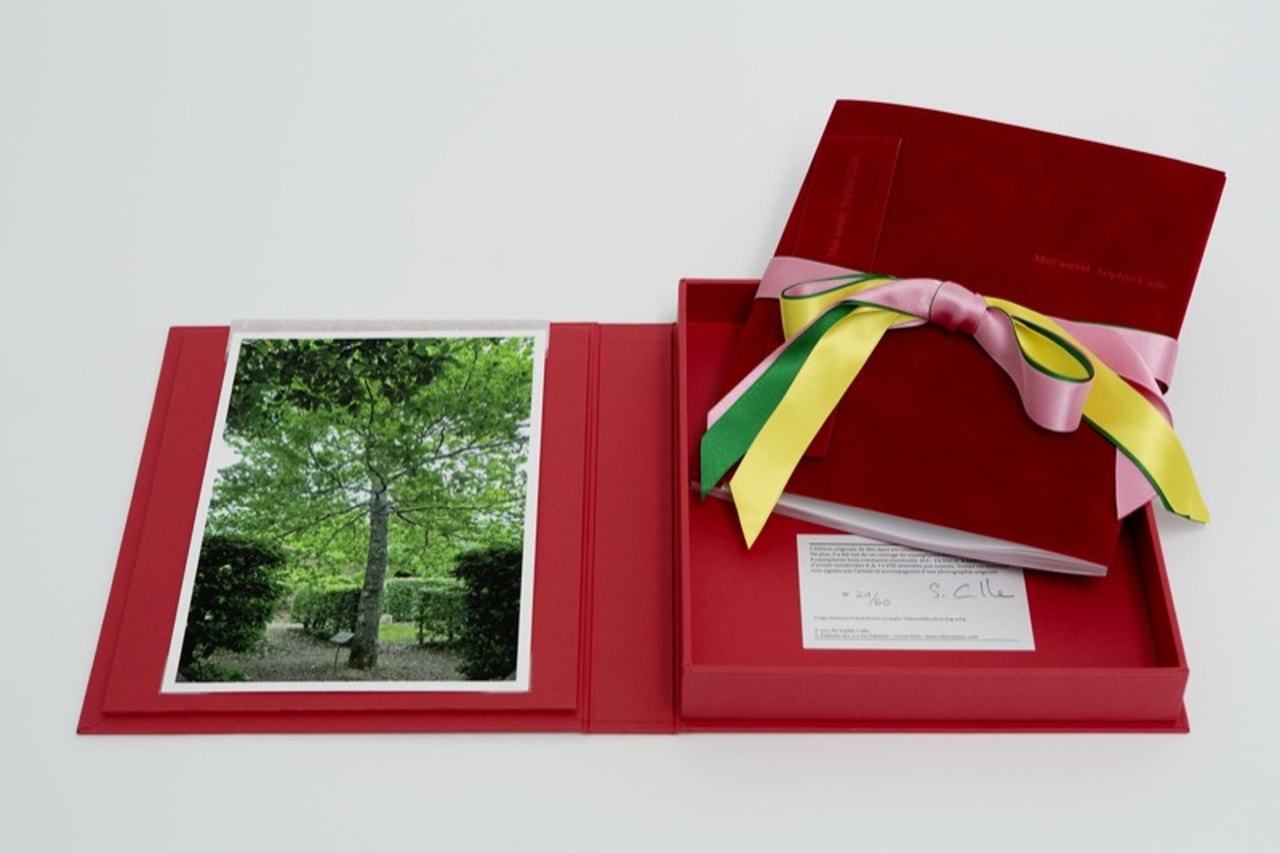 Moi Aussi is about the ritual of the artist’s birthday and the gifts received by Francois Mitterrand during his two seven-year terms. During several years, Sophie Calle preserved her gifts unopened and photographed them with the purpose of gathering them around an exhibition. The artist explains her approach: “I have kept my birthday gifts unopened since 1980 and I have done this ritual 14 consecutive years. Francois Mitterrand created the Museum of the Seven-year Term in 1986 to exhibit all the gifts he received during his function as the President of the Republic. Having a year of advantage, I thought about calling this book “Him too”. But looking at his function, and the number of our respective gifts-about 380 from my side, 4,700 objects and about 18 000 books from his- I changed my mind”. The book in velvet evokes the ribbons of the women of the Legion of Honor , which was offered to Francois Mitterrand. Sophie Calle even tells us how to tie the ribbons and offers us a beautiful birthday gift.

454 sheets, 908 pages and a 1:85 scale build the house of artist Olafur Eliasson in Copenhagen. Commanded by the library of the New York Museum of Modern art, “Your House” becomes like “your home” for a reading-ambulation. Throughout its pages, and with striking three-dimensions, the observer immerses himself, not in his usual intergalactic spaces but under his roof. The master in the subject of immersion is not left behind when it comes to blurring our perceptions.

Known for his paintings of meals and his optical illusions, Daniel Spoerri continues his experimental journey through an inventory of objects that describe his hotel room in the Mouffetard Street. The artist depicts each object (a slice of bread, a cigarette’s burn) with meticulousness and thus creates a parody out of a museum catalog. At the end of the book, a schema of the topographical summary of chance is offered as an exhibit. In the filiation of Georges Perec and his “An Attempt at Exhausting a Place in Paris” Daniel Spoerri examines the “infra-ordinary”.

Disorder, order, unfold, classify, list… this are the games practiced by Claude Closky, a major figure of the conceptual art book. With a Dadaist and Surreal style, the artist “unfolds” (in the literal and figurative sense) the established order. He inherited from a second lineage: the Oulipian games of Rene Magritte and conceptual art. His work unravels the workings of the media through two contradictory figures: the ellipsis and the accumulation. He thwarts and diverts the language of the dominant discourses divulged by the mass media. The absolute search for sense by the models of representation going down from their pedestal with a hilarious humor.