Across art history France has produced many significant sculptors. We bring you 10 French sculptors that we think you should know about, from the big names to the lesser known talents.

Houdon was a neo-classicist famous for his busts and statues of prominent figures during the Enlightenment movement. His list of famous subjects included Diderot, Rousseau, Voltaire, Franklin and Napoléon I himself. Born in Versailles, he studied in Italy and later in life travelled to America to complete a commissioned statue of George Washington. Following his death, his busts were used to train budding artists in the mastery of facial expression.

Although wax sculpture may not be counted by some purists of the genre, Marie Tussaud’s legacy in sculpture and waxwork is undeniable. Her story is very different from most of the other French sculptors on this list: exiled from France after the Napoleonic Wars, Tussaud toured Great Britain exhibiting her incredibly detailed wax figures and busts. Today, the gallery she set up during her lifetime – Madame Tussaud’s – is one of London’s premier tourist attractions, with branches all around the world. Certain figurines made by Tussaud herself survive to this day.

Rodin is broadly considered to be the father of modern sculpture, although he was classically trained and never set out to break from tradition. He was criticised during his lifetime because of his radical realism, marking a departure from the previous trend for idealising the human form. Rodin showed particular interest in depicting the very old, or the haggard, or the suffering. His statue ‘The Thinker’ is one of the most instantly recognisable pieces in the art world.

After a slow start to his career, Pigalle eventually went on the become one of the most successful French sculptors of the age. His statues ‘Mercury Attaching his Wings’ and ‘Voltaire nude’ are amongst his best known works, although he also designed the tomb of Comte d’Harcourt which resides in the Saint-Guillaume de Notre-Dame in Paris. At one time considered synonymous with 18th century sculpture, Pigalle is today most often recognised because he shares his name with Paris’ red light district.

One of the best known female French sculptors, Saint Phalle enjoyed a long and prolific career. Her vivid and engaging works developed across her working life, although her interest in art initially grew from self-taught venture into oil paintings and gouache. Inspired by Gaudí, Saint Phalle moved into sculpture across the 60s, with her famous series of ‘Tirs’ (Shootings, or Shots). She is perhaps best known for her vibrant ‘Nanas’: largescale, brightly coloured works, which celebrate women and the female body.

Arp is known as one of the most experimental sculptors of the 20th century, best known for his large scale biomorphic pieces. He was linked to surrealism in Paris in the 1920s and 30s, but his later works following his break from the movement are his most famous. The soft nature of his lines has led some to brand his work ‘organic sculpture’, whilst the abstract nature of his composition paved the way for the development of non-representational and monumental sculpture.

Bourgeois used art as a therapeutic process throughout her whole career, dropping out of her maths degree and taking up art following her mother’s sudden death in 1932. She herself never identified her work as explicitly feminist (she said the issues it dealt with were “pre-gender”), but it was taken up by the nascent movement across the 60s, and deals with complex issues surrounding sexuality and the female psyche. Perhaps her most famous work is ‘Maman’, a huge spider sculpted in steel and marble, which Bourgeois has said represents the strength of her mother.

Best known for his 1917 ‘Fontaine’, Duchamp is one of the most famous French sculptors, even though much of his other work is more focused on painting. He is often associated with the Dadaist movement, despite never officially linking himself to the group. He rejected traditional standards of art and was key in the development of subversive ‘anti-art’ that dominated the late 20th century into the 21st. Later he abandoned art altogether and devoted himself to professional chess.

Richier was a polemical figure in her lifetime, creating controversy when she crafted an abstract representation of Christ for the Notre-Dame de Toute Grâce du Plateau d’Assy. The statue was ordered removed from sight of the Bishop of Annecy, and sparked an international debate about the nature and role of sacred art. Despite her later venture into abstraction her early career was largely figurative, focusing on the depiction of mythical creatures and human-esque hybrids.

The most contemporary of the French sculptors on this list, Goutard (artist’s name VAL) had a flourishing career in sculpture before her untimely death in 2016. Her earlier, smaller-form sculptures focused on relationships between humans and the space around them, and tended to be simplistic, with few elements. Later in her career, following growing international interest in her work, VAL’s pieces grew in size and complexity. 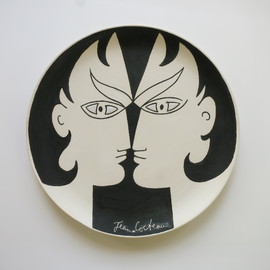 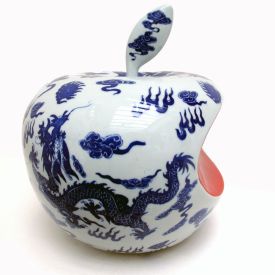 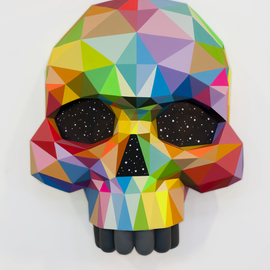 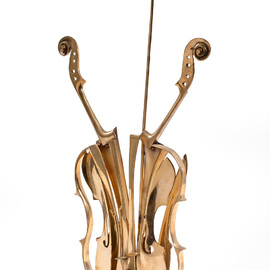