Street art‘s international star, the English street artist Banksy has managed to keep his identity secret. Although there are several theories about his possible identity, as of today, none of them have been proven true. Artsper has prepared an overview of the different conjectures about his identity, at a time where the street artist’s name is on everyone’s lips…

In 2008, the British paper, The Daily On Sunday, declared that they had finally unravelled the mystery. Indeed, in a photograph of British street artist Robin Gunningham, two of Banksy’s signature stencils are visible. Gunningham, just like the famous anonymous artist, is from Bristol and had supposedly shared a flat with with artists who worked with Banksy. And, surprise surprise, Banksy’s artworks started flourishing in London, around the time of Robin Gunnigham’s move to the city.

However, when a journalist went to visit Gunningham’s parents to gather the final proof, they asserted that they did not recognise the person in the photograph…

There was a spectacular turn of events in 2016 as the investigators, publishing their findings in the Journal of Spatial Science’s study, claimed to have sufficient proof to firmly identify Robert Gunnigham as Banksy. They used a scientific technique usually reserved for criminals: geographic profiling. By relating Banksy’s 192 works to the places Gunnigham visited, the team of researchers were able to demonstrate that even if Banksy isn’t Robin Gunnigham, this hypothesis remains the most plausible one.

A new hypothesis surfaced in 2016, according to which Banksy would be Massive Attack’s lead singer: Robert del Naja. Certain coincidences are hard to ignore: from Bristol as well, del Naja also dabbled in street art. And that isn’t all, as well as appearing in Banksy’s documentary movie “Exit through the Gift Shop,” Robert del Naja always seems to be in the right place at the right time. By comparing the cities on the band’s tour and Banksy’s work, a clear link can be established. It could, of course, all be mere coincidence. The singer has denied these claims, stating that “it would be a good story but sadly not true.”

During an interview in June 2017, the British DJ Goldie, a good friend of Robert del Naja, let slips some information that did not go unnoticed. On contemporary art that he critiqued, he stated; “Give me a bubble letter and put it on a T-shirt and write Banksy on it and we’re sorted. We can sell it now. No disrespect to Robert, I think he is a brilliant artist. I think he has flipped the world of art over.” Following his slip of the tongue, Goldie changes the subject. Is Robert a reference to Robert del Naja? We still don’t know.

None of these theories has enough proof in them to allow us to confidently establish the identity of the world’s most famous street artist and so the mystery remains unsolved. 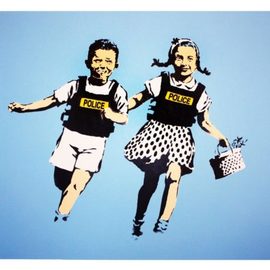 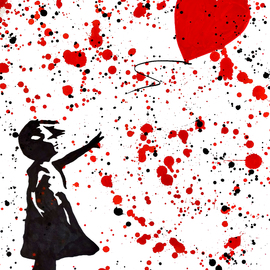 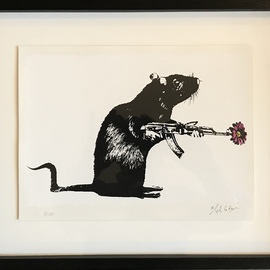 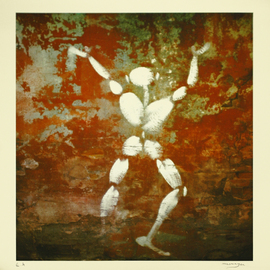