Aboriginal art is not only one of the most ancient forms of art, dating back further than 17,000 years, but also one of the most culturally significant, due to the depth of meaning it accommodates.

As the indigenous population of Australia had no written language, Aboriginal artwork and its iconography was key in storytelling and general communication. As such, Aboriginal art is rich with meaning and through its symbols we can decode these ancient messages.

Much of Aboriginal art was imperative in passing down stories and key information about the land from generation to generation. Though these combinations of dots, lines and other markings may appear indiscriminate, they are actually extremely thought out and planned. Once deciphered, indigenous art provides an insight into the nature of the Australian land, Aboriginal history and beliefs. Examining traditional Aboriginal rock art, wood carvings and cave paintings will reveal these ancient stories.

Artsper is breaking down some of the key symbols of Aboriginal art and their significance to help you decrypt their ancient stories!

In Aboriginal art, people are represented with a ‘u’ shape. Whilst this may seem strange, the explanation for it is simple; it is the shape left in the ground after humans sit cross legged.

Whether this symbol represents a man or a woman is determined by the tools and utensils engraved next to it. For example, a man may have a spear or a boomerang, whilst a woman will have a digging stick or a coolamon (a traditional bag used to transport water or berries).

Depictions of meeting places in aboriginal art were imperative for survival purposes. They informed later generations where to find shelter or water, given the hostile nature of the Australian outback. They are also significant due to the sacredness of such places, meaning they are regularly occurring symbols in art which tells stories of a more spiritual nature.

The symbol for waterholes is a series of concentric circles, and multiple waterholes connected by wavy lines suggest running water.

Similarly, the symbol for meeting places is a series of concentric circles with adjoining lines which represents paths taken to arrive by different people. Meeting places were an extremely important aspect of Aboriginal life where people would come together and gather and sit in a circle.

Rockholes are another example of sites that were both significant practically and spiritually, and thus appear often in Aborignal art. They not only provided a source of water but were also the location for various religious and cultural ceremonies.

Most often, animals are represented by the distinctive tracks they leave behind. For example, kangaroos tracks are characterized by the tick shape prints left in the sand by their feet and a line in the middle which represents the mark left by the tail.

Some animals have more of a spiritual significance in Aboriginal art. As a fundamental element of creation beliefs held by Aboriginal people, and a symbol of strength, creativity and continuity, the snake features heavily in Aborignal artwork.

Another animal of significance is the turtle. In Aboriginal art, the turtle signifies the Warabah, an emblem of protection and the warrior.

Food is understandably an important element of Aboriginal art. Its presence was used to communicate to later generations the location of available sources of nourishment. The “bush tucker,” food native to Australia, consists of berries, plants, fruits and eggs and meat from native animals. Additionally, this included any flora and fauna used in both cooking and treating illness.

A couple of common symbols are honey ants in their nest, fruits, flowers and eggs (all symbolised by small circles), as well as bush berries, the yam plant and witchetty grubs.

Due to the profound connection between the aboriginal people and their land, the power of the elements extends beyond the physical and into the spiritual. This manifests in the depiction of nature in artwork. For example, aboiginal people celebrate rainfall by performing song and dance in ceremonies. Stars are also extremely significant as they are a trusted source of direction and are referred to as totemic beings.

Another key element of Aboriginal art are the distinctive dots. Interestingly, these types of paintings originated from the era of colonisation. They were developed out of fear that white settlers could understand the ancient and sacred knowledge within Aboriginal art. The dots aimed to conceal meaning from the untrained eye but were still intelligible to the Aborginal people.

And there you have it, some of the most common and important symbols within Aboriginal art, and the ancient meaning behind them. If you would like to find out more about Aboriginal art or discover some pieces for your own home, look no further than our selection of beautiful Aboriginal artwork on Artsper! 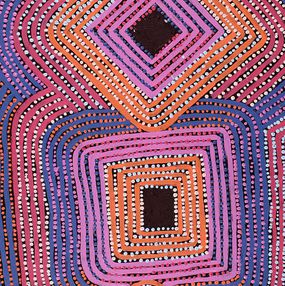 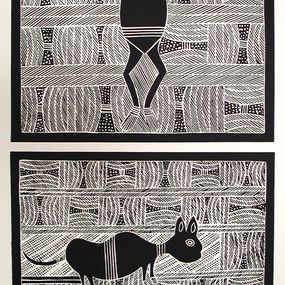 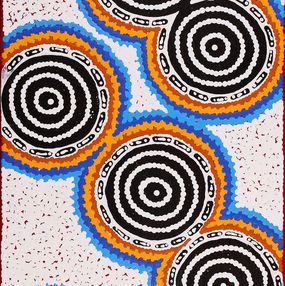 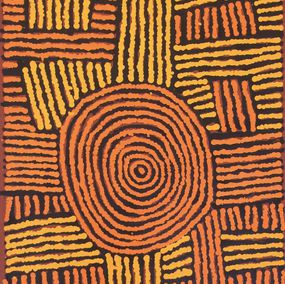