February is Black History Month in North America. It’s a time of recognition – of the importance of diversity and tolerance, but above all, of the achievements of black people in US history. This month is an opportunity to reflect on the experience of an entire community, their past trauma as well as their current, persisting struggles. In honor of Black History Month, we’d like to introduce you to 10 key artists that you should know.

One of the major artists to know for Black History Month is Basquiat. He made it as a mixed-race artist in the 1980s, in a market that followed and perpetuated a pattern of categorically white elitism. Mixing various media and symbols, he drew inspiration from everything: an anatomy book, the streets of New York, pop culture or boxing – all the while retaining a preoccupation with mortality and a desire to represent the black condition. Tragically passing away from an overdose at the age of 27, Basquiat was an exceptional young artist who pushed the boundaries of the avant-garde. He experienced a meteoric rise to fame, and the value of his works have since seen an unprecedented growth: between 2000 and 2018, their worth increased by 1,000%.

UK-based artist Chris Ofili was born in Manchester in 1968. He was one of the Young British Artists and won the Turner Prize in 1998. You may well have heard of him, most likely due to the controversial materials he uses in his works – notably, elephant dung and cut-outs from pornographic magazines. Indeed, famous examples include The Holy Virgin Mary and The Upper Room, both of which were made with clumps of elephant dung, treated and coated in resin, before being placed under the canvas and on the painted surface. These two artworks have been the subject of much controversy, although Ofili received much praise for his bold compositions. His messages, playful yet complex, investigate the intersection of desire, identity, and representation.

One of many important women artists to know for Black History Month: Kara Walker. She explores the horrors of slavery before, during, and after the American Civil War. She is known for her use of silhouettes, a technique widely used in 19th-century portraits and decorative arts. Her work examines themes of subjugation, depravity and desire. By confronting us with the uncomfortable truths of oppression, Walker reminds us that the trauma of this lasting American legacy is still very much present today. She encourages us to be critical of the role we play in the unjust attitudes that shape our society.

Born in Illinois and trained in California, David Hammons lives and works in New York. His work reflects his strong commitment to the civil rights and Black Power movements. As a conceptual artist, the power of his works lies in his use of allegory. A dab hand at symbols, he subverts and re-appropriates them to create new metaphors. In fact, Hammons famously claimed, “outrageously magical things happen when you mess around with a symbol.” Such emblems can be seemingly trivial things, such as cigarettes and hair, which hold meaning in their ties to black culture, for example – or they can be specific political icons, like the American flag.

American artist Mark Bradford’s work is embedded with numerous social issues. Breathing new life into scraps of paper found in his studio, the artist layers them before tearing some out, adding pieces of wire and coiled rope. He creates textured surfaces that he then varnishes with synthetic resin. While he states that he doesn’t represent anything deliberately, Bradford’s works encourage reflection on the black condition and African-American history. As a gay black artist, these are issues with which he is familiar. His powerful work has earned him great renown: he exhibited at the Venice Biennale in 2017 and has broken auction records.

Artist Lorna Simpson defies traditional and narrow notions of sex, gender, identity, race and memory. In particular, she explores the concept of black female identity. Born in 1960, she was already fairly successful by the 1980s and 1990s. Indeed, in 1990, she was the first African-American woman to exhibit at the Venice Biennale, and the first to get a solo show at MoMa. Her work is poetic and gentle, but powerful. In the photo-text artworks for which she is best known, she juxtaposes decontextualised images with words or pieces of prose. The result is a unique and multifaceted message, that disrupts problematic ideals and encourages a critical perspective.

Born in 1944, El Anatsui is a Ghanaian sculptor. He is world famous for his majestic bottle-top installations. These are composed of thousands of pieces of aluminium sourced from alcohol recycling stations and sewn together with copper wire. El Anatsui always wanted to create art with a link to his identity as an African native and citizen. His sculptures, veritable metal tapestries, “draw connections between consumption, waste, and the environment”. His work has been exhibited all over the world, demonstrating that African art is not a fixed category, but rather an ever-evolving fabric.

Another artist you should know for Black History Month is Mickalene Thomas. She was born in New Jersey and attended both Yale University and the Pratt Institute. She is known for her colourful, empowering representations of black women. Her process often begins with studio installations in which a model poses. After photographing the scene, Thomas reworks it into a collage, then an acrylic composition, to which she adds rhinestones. She draws on art history and popular culture (Manet’s Olympia, for example), references which she reinterprets and transforms into messages of female sexuality, beauty and power. Thomas works with many different mediums: photography, collage and painting, as well as film, sculpture and installation. Demand for her work is constantly growing: she exhibits in galleries across the world and collaborates with various famous artists and luxury brands.

Another artist with a penchant for words, Glenn Ligon creates powerful messages that address issues of racial and sexual identity. From painting to neon lighting, photography, film and printmaking, Ligon delves into his experience as a gay black artist through his art. His creative process often involves intertextuality, building a message through the mention of another – usually popular – reference. For example, he used iconic quotes from historical figures to create his neon installations. The creator of the term “Post-Blackness”, Ligon is exhibited by some of the world’s major art institutions. He is one of the most important black artists in the contemporary market.

And last but not least on our list of artists to know for Black History Month: Carrie Mae Weems. Born in Portland, she is particularly influential in the United States. She uses various media but she is most famous for her photographs and her installations combining photo, text and audio. Weems started producing artworks as a teenager, after receiving a camera as a gift. She soon became successful. At the heart of her work is her engagement with issues concerning racism and gender. She uses photography (especially black and white) as a way to reformulate the black experience and tackle matters of ownership and space. In one of her series, for example, she reenacts 19th century ethnographic photographs of slaves. Weems doesn’t just reflect on socio-political issues through art, she reflects on the medium itself and the role it has in these issues. 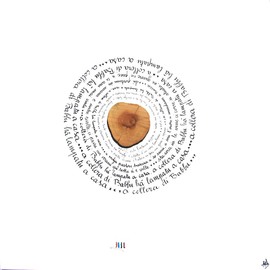 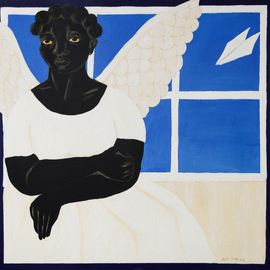 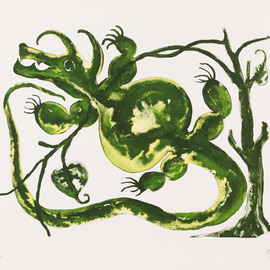 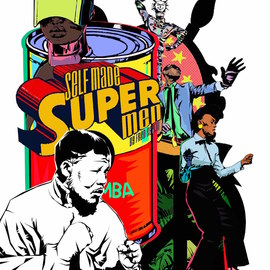