Despite being the world’s most famous painting, a profound scepticism still surrounds the woman with the enigmatic smile. Fascinating, intriguing and mysterious; the Mona Lisa is still discussed animatedly today, offering a vital insight into the Renaissance period. She is known and recognised worldwide, and her admirers travel from every corner of the globe to see her (or rather try amongst the mob of tourists and smartphones). Thousands of eager eyes peruse the painting daily, absorbing da Vinci’s well-guarded masterpiece. The year 2019 marks 500 years since da Vinci’s death, and has been commemorated by a huge retrospective of the artist’s career at the Louvre. The exhibition is such a highly anticipated event, that the Louvre was forced to ask visitors to reserve a specific time slot to visit. To mark this monumental occasion, Artsper takes you back in time to find out more about the woman behind the smile.

The painting should have been completed in 1503, but the painter never let it out of his sight; never truly ‘finishing’ the painting until his death in 1519. When da Vinci left Italy to become King Francis I’s protégé, he took 3 works with him: one being the Mona Lisa. Shortly before his death, da Vinci sold the painting to King Francis I for 4,000 gold coins, and it remained a part of the royal collections during the reign of Louis XIV. Before it joined the permanent collection of the Louvre, Napoleon Bonaparte requested the painting for Josephine’s personal apartments. Like the majority of the museum’s objets d’art, the Mona Lisa had to be removed and stored securely during the two World Wars. Louvre curator, René Huyghe, saved the painting from the Nazis by hiding it under his bed. Despite her tumultuous travels in previous years, André Malraux’s insisted the Mona Lisa leave Europe for the United States, where she was received by President John F. Kennedy in 1962. Now too fragile to travel, the Mona Lisa remains in the Louvre where she is visited by thousands everyday.

The Mona Lisa, like the rest of da Vinci’s paintings, was never signed or dated. When it comes to the identity of the mysterious Mona Lisa, it is Giorgio Vasari’s theory that is considered the most official. “Mona” derives from the Italian term “Monna” meaning “lady,” suggesting Lady Lisa to have been Lisa Gherdinini, the wife of Francesco Del Giocondo. It is widely believed that Giocondo, a cloth and silk merchant, commissioned the painting of his wife but never received it. However a widespread scepticism surrounds this theory; many are dubious as to the authenticity of this story, and are still searching for the Mona Lisa’s true identity. Italian historian, Roberto Zapperi, accused Giorgio Vasari of inventing this claim, and that the Mona Lisa is actually a portrait of Pacifica Brandani. Brandani was the mistress of Giuliano de’ Medici, son of Lorenzo de’ Medici. The identity of the Mona Lisa remains an animated discussion amongst art historians, and has even become the root of some more far-fetched theories. Some of the most creative claims suggest the Mona Lisa is a prostitute, da Vinci’s mother or even a man ( Leonardo’s apprentice, Salai). Others are convinced the Mona Lisa is a portrait of the 15th century Duchess of Forli, Catherine Sforza. Attempts have even been made to reconstruct Lisa Gherardini’s face from her skull, to then superimpose onto da Vinci’s portrait. Even though these attempts were unsuccessful, Lisa Gherardini was still formally identified as the Mona Lisa.

Her profound gaze follows you around the room, and her expression is a source of fascination to many. After 500 years of watching her visitors, the Mona Lisa has maintained ironclad eye contact with all those who let themselves be absorbed by her mocking smile. Art historians have again proposed various theories for this fascination with the Mona Lisa. Medical hypotheses are the most common; where dental issues, facial paralysis and even thyroid problems are at the root of the Mona Lisa’s captivating aesthetic. The particularity of the Mona Lisa’s face could simply be due to fading colour over the centuries. One theory charmingly claimed the Mona Lisa’s facial expression is a result of entertainers who made the model laugh during the painting; allowing da Vinci to capture this unique and slightly stifled smile.

A major study at the beginning of the 21st century provided a better understanding of Leonardo da Vinci’s famous sfumato technique. “Sfumato” means “soft” in Italian, which accurately describes the delicate, hazy and slightly blurred effect of da Vinci’s painting. Subjects are coated in a cloud of carefully blended colour and subtle gradations. The Mona Lisa is made up of approximately twenty light layers of paint, some of which are extremely thin. As a result of this meticulous work, the surface of the painting shows absolutely no trace of brush strokes. Despite its epic age, the Mona Lisa is rather well preserved. However, infrared analyses have discovered that certain pigments and in particular Mona Lisa’s eyebrows, have faded over the centuries.

One morning in 1911, visitors were shocked to discover that the Mona Lisa had disappeared from the Louvre. News of the painting’s disappearance spread like wildfire, and fingers were quick to point at Pablo Picasso and his friend, Guillaume Apollinaire. However, the Mona Lisa was actually stolen by Vincenzo Peruggia, an Italian carpenter, who kept the painting on his kitchen table for two years before it was found. This had an astronomical impact on the public, all because Peruggia was under the false understanding that the Mona Lisa was one of the paintings stolen by the Napoleonic army. Throughout the history of art, her smile has inspired artists such as, Marcel Duchamp, Salvador Dali, Andy Warhol, Banksy and Okuda. Even today, a considerable number of contemporary artists still appropriate this mythical portrait in their works.

Leonardo da Vinci truly put his heart and soul into the Mona Lisa. Many claim the portrait is physically aging, as the left side of her face appears younger than the right. Perhaps this was intentional, and da Vinci’s mastery managed to convey a painting who would quite literally age with the hundreds of generations she observed. 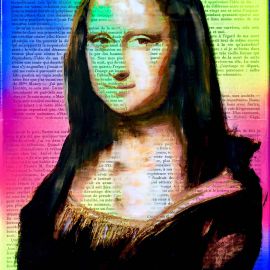 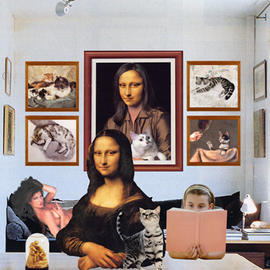 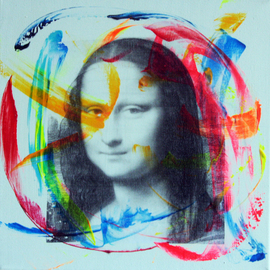 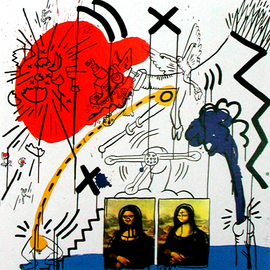