Great art is the outward expression of an inner life in the artist, and this inner life will result in his personal vision of the world. – Edward Hopper

Edward Hopper’s Nighthawks was completed in 1942 and captures the paradox of loneliness in urban life. Hopper’s masterpiece is an existential crisis in its own right; where a group of individuals fall prey to the isolating stillness of New York City. It remains not only one of the most recognisable, but also relatable paintings in 20th century American art, and Artsper explores the nostalgic depths of this modern masterpiece.

The lonely reality of America

Harsh fluorescent lights bleed onto the darkened streets of New York City, whilst four supposed strangers sit around the counter of a late-night diner; physically close yet psychologically miles apart. The very essence of human vulnerability throbs like an exposed vein in Hopper’s masterpiece, capturing the all-consuming solitude of modern life. Even before smartphones took over any attempt at real human interaction, Hopper’s iconic painting reveals our inability to connect in the early 1940s.

Despite the lack of reflection from the luminous glow of a phone screen, the diners’ gazes still remain vacant, unfocussed and unmet. Nighthawks depicts not only the bitter alienation of living in a large city, but the paranoia that gripped the United States after the 1941 Pearl Harbor attack. Anxieties over a second attack shrouded the city like the frequent blackout drills New York and its residents were subjected to. We, as viewers, become silent voyeurs, watching the stony expressions of Hopper’s unreachable subjects through the window. With no door to enter the diner, we are left outside, embodying the underrepresented role of the lonely New Yorker blinded by phosphorescent hues.

The Importance of the Composition

Hopper’s unique composition permits the viewer to see the subjects from both frontal and profile views, highlighting the melancholy that consumes the nocturnal isolates. The angular nature of this Modernist masterpiece painfully evokes the near-meaningful interactions between the subjects, which are continuously interrupted or ignored. Hands nearly touching, eyes nearly meeting or mouths nearly speaking; Hopper’s intimate setting perfectly encapsulates the alienating reality of life in the Big Apple.

The Truth behind the Red-Haired Woman

Jo Hopper, Edward Hopper’s wife, is the enigmatic red-haired woman seated at the counter. Not only did she model for the painting, but she also kept a detailed journal of each of Hopper’s works. Her role as Hopper’s personal art historian may have even inspired the name behind the painting, where she describes one of the men in the painting as a “night hawk (beak) in dark suit, steel grey hat, black band, blue shirt (clean) holding cigarette.”

The Location of the Diner

The diner in Hopper’s painting was apparently based on a real establishment in Greenwich Village; however, disputes over its legitimacy continue to give rise to heated discussions. Although now a vacant site, the diner was said to have sat between two streets; Greenwich Avenue and Seventh Avenue South.

A Possible coincidence or perhaps an intentional move on Hopper’s behalf, choosing to depict a crossroads certainly reflects the void between physical proximity and the inability to emotionally connect in modern urban climates.

“Unconsciously, probably,” as Hopper once explained, “I was painting the loneliness of a large city.” 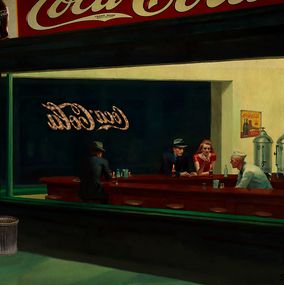 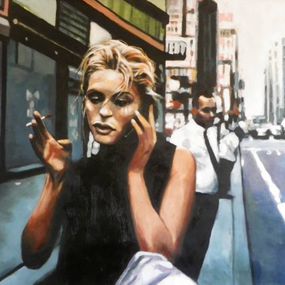 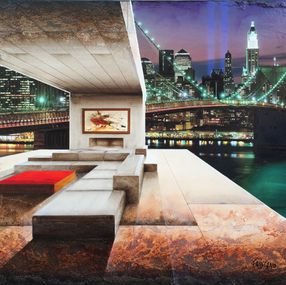 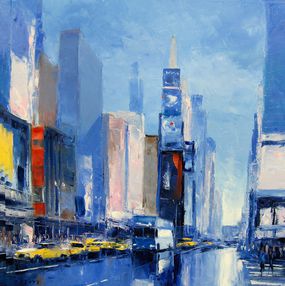