Banksy is one of the most famous living artists in the world, if not the one. And yet, he managed to keep his identity a secret for all these years. He never appeared on television or on any photograph, and he is a complete stranger to any paparazzi. So that makes a lot to be curious about! To help you in this difficult state, we have gathered 8 anecdotes you need to know about Banksy!

Banksy was born in Bristol in 1974 and is the son of a photocopier technician. He learns how to do graffiti in his native city, where he was part of a gang named DryBreadZ Crew. Nowadays, he still comes back to Bristol on a regular basis, and its inhabitants are never surprised, a new piece of art by Banksy on the corner of their street.

Banksy took a lot of his inspiration from the work of a french street artist, Blek Le Rat, who is considered as one of the pioneers of street art. He owes him his use of stencils, and his rat-like character, now one of the emblems of his work.

He hides his identity extremely meticulously, and it has never been revealed since he started his life as a street-artist. He uses an third-party to deliver his now famous certifications of authenticity, named Pest Control. One journalist of the Guardian claims meeting him face to face in 2003 for a very exceptional interview.

In 2004, during the Notting Hill carnival, he handed out fake £10 notes, with the face of Lady Di replacing The Queen’s, stamped “Banksy of England”. Today, some copies of this £10 note can still be bought!

When he wins this very coveted price in 2007, he is also the first not to come get it personally, in order to keep his identity a secret.

One of his sculptures, “The Drinker” is the subject of a documentary about to be released. This statue, which looks a lot like the thinker of Rodin, only with a road sign on his head, was in the center of a very busy square in the center of London. It was stolen in the middle of the day, by a movable crane, without anyone noticing anything. The documentary “The Banksy job” will be released in 2016, follows the aftermath of the theft: the ransom, Banksy’s refusal…

In 2013, in order to denounce the art market’s nonsense when it comes to pricing artworks, he hired someone to sell his printed artworks on the street. Each one of these was sold 60$, the lucky people who bought one were absolutely sure it was a fake, because of the price. The video Banksy published the day after soon went viral, and now these artworks are worth $20 000 at auction.

The artwork he conceived in collaboration with Damien Hirst, “Keep it spotless”, sold at auction for $1,7 million in February 2008, thus setting a new kind of record for street-art! 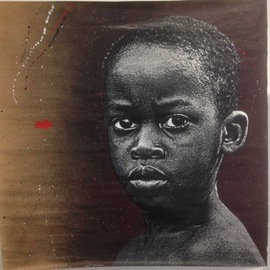 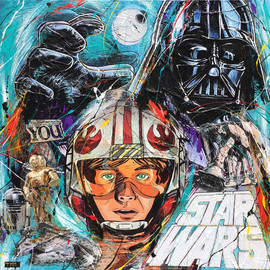 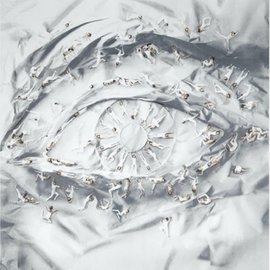 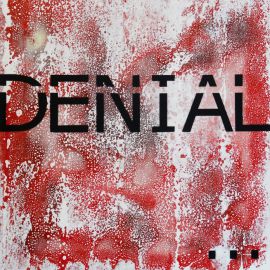