Georg Baselitz was born Hans-Georg Kern on January 23 1938 in a fractious Germany. In 1961 he dropped his birth name and adopted his painter’s pseudonym. A tribute to his home town Deutschbaselitz (Saxony), he started signing his paintings with the name Baselitz. Discover 10 things to know about Baselitz, an unorthodox character.

Every child’s worst nightmare? Baselitz lived through it. Since his father was a schoolteacher, Georg lived with his family on the school grounds. Yet fortunately, it was thanks to the school library that he discovered art for the first time, in a 19th century drawing book. Leaving one school for another, he started at the Hochschule für Bildende und Angewandte Kunst in East Berlin. Soon after, he was expelled for ‘socio-political immaturity’, so joined Berlin University of the Arts in West Berlin.

Following a period of experimentation where Baselitz cut his canvases into strips, he discovered a technique that would later become his signature. Indeed, in 1969, he created a work inspired by the motif in Louis-Ferdinand von Rayski’s painting Wermsdorf Woods (Wermsdorfer Wald) and inverted it so that the bottom became the top, or The Wood On Its Head (Der Wald auf dem Kopf). This inversion would become a distinctive characteristic of his painting and artistic identity. Baselitz explained this intriguing gesture as a way of testing the limits between figuration and abstraction. He found it very important not to create anecdotal or descriptive paintings, as some figurative paintings can be. On the other hand, he disliked the subjectivism of abstract art. The inversion of his paintings seemed to him to be the perfect compromise.

If Baselitz is known for one thing, it’s scandals. He seemed to cultivate this image of himself as much as he encouraged it. He caused outrage during his first solo exhibition in 1963, when two of his most daring paintings, Die große Nacht im Eimer (The Big Night Down The Drain) and Der nackte Mann (The Naked Man) were seized by bailiffs on the grounds of obscenity and indecency. A lengthy court case followed, which eventually resulted in the return of his works and a newfound notoriety.

4. He took down his artworks in protest

Among these 10 things to know about Baselitz, this one is lesser-known. The artist is an outspoken and seemingly audacious man. In 1977, during documenta 6 in Kassel in which he was taking part with Markus Lüpertz, he took down his works in protest against the presence of painters from East Germany (the German Democratic Republic). At the time, the move created a scandal and propelled the two artists to the forefront of the international scene.

5. He made waves at the Venice Biennale

Baselitz broadened his creative horizons in the 80s, starting to make immense wooden sculptures. Created with a chainsaw, they took on the same cold, mechanical and brutal characteristics as the tool. During the Venice Biennale in 1980, Baselitz exhibited Model for a Sculpture, an incredibly controversial work depicting a seated figure performing what resembles a Nazi salute. This only increased his reputation as a provocative artist and critics went wild. However he defended himself, saying it was never his intention to evoke to the horrors of the Nazi regime, but rather a misunderstanding. Opinions remain divided.

It was on a trip to Paris in 1960 that Georg Baselitz happened to discover Eugène Leroy‘s work. Still a student, this encounter left a deep impression on him. He is fond of describing how, when he discovered Leroy’s paintings on show at the Galerie Claude Bernard, he didn’t dare open the gallery’s door in case he would have to buy something. He instead was happy to gaze at the works through the window. While the accuracy of the memory has been disputed by Baselitz’ friend, it is nevertheless touching proof of his admiration for the French painter.

7. He explores ageing in his paintings

The figures and bodies George Baselitz has depicted in recent years are the antithesis of the smooth, toned silhouettes associated with youth. He paints wrinkles, sagging skin, protruding bones, angular features and white hair. Fragility and even death pervade these paintings. Baselitz reveals he isn’t scared of the inevitable; as he ages, his models do so too. Nevertheless, where other people would see degeneration, sadness, illness and death, he invites the viewer to discover love, tenderness, admiration and beauty. The entire collection features and is a tribute to his only and most trusted model, his wife Elke Kretzschmar.

A joke made in poor taste or male chauvinism? Baselitz’ outspokenness struck again and caused a frenzy in the art world. In 2013 the German painter declared to journalists that “women don’t paint very well”. And according to him, there is a simple explanation: to be a painter of quality requires a certain amount of brutality, a quality specific to the male gender. He added that there were still some notable women in the history of painting such as Agnès Martin, Cecily Brown and Helen Frankenthaler.

9. He painted the Heroes series

This is one of the final things to know about Baselitz. Admitting that he could never escape Germany or being German, Baselitz painted the series of works, Heroes in the 60s. He described this achievement as a means to connect with his country’s identity. This series of large-format compositions depicts soldiers in uniform; muscular, armed and imposing. Despite their strength, they seem weak, destitute and desolate. Borrowing styles from Expressionism and Romantic painting, it is as though Baselitz’ works are broken up, then re-assembled and stuck back together in disarray, mirroring the experience of many ex-soldiers in post-war Germany where the artist lived.

Georg Baselitz is considered, with Markus Lüpertz, one of the pioneers of German Neo-Expressionism. This movement came about as a reaction against new forms of expressions such as Arte Povera, conceptual art, performance art, Land Art, favouring instead a ‘return to painting’. From 1980, Baselitz concentrated on this medium. His models were consigned to the background, set as a simple motif rather than the real subject of the canvas. In collaboration with painter Eugen Schönebeck, he wrote two manifestos: Pandemonium (1962) and The Great Friends is a good picture! (1966), in which he expresses his determination to resist the influence of the School of Paris and American painting. 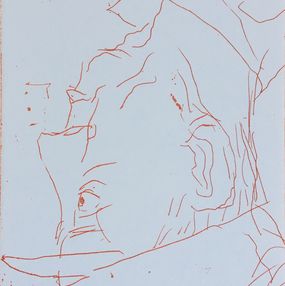 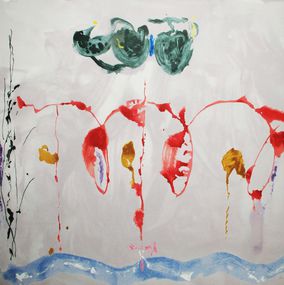 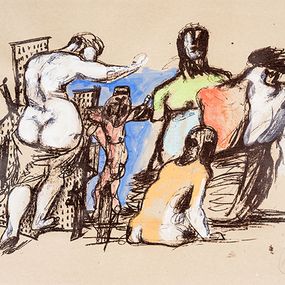 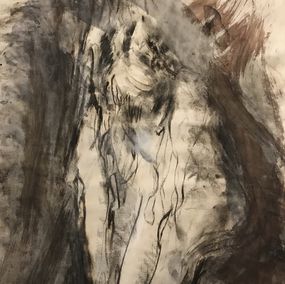